Joint effort in the fight against HIV/AIDS, TB, and Malaria 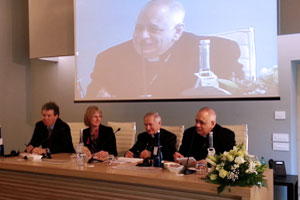 The reality of AIDS in the US and other wealthy countries has changed enormously since the 1980s. Medicines are accessible, people can live long and healthy lives and the US government has ploughed billions of dollars into the global pandemic to help other countries deal with the disease effectively.

However, in 2014, the reality of an HIV diagnosis in a developing nation can still have a devastating effect on people’s lives depending on where they are and how much of a priority their government gives to AIDS.

Caritas, along with UNAIDS, organised an AIDS consultation in Rome on 25 and 26 February to strengthen the joint response of Faith-Based Organisations (FBOs), UNAIDS and other agencies AIDS on a global level. Co-sponsors included US Embassy to the Holy See, UNITAID, the Global Fund to Fight AIDS, TB, and Malaria, CUAMM – Doctors with Africa, Catholic Relief Services, and Ecumenical Advocacy Alliance.

Speaking to Vatican Radio during the consultation, Dr Luiz Loures deputy executive director of UNAIDS, said, “Less than 10 years ago there was one single country in the south that was treating AIDS – that was Brazil. There was no treatment in Africa, no treatment in Asia. Today there are 10 million people on treatment, mainly in Africa, with drastic reductions in terms of the number of deaths.

“This progress allows us to speak of the end of AIDS as a realistic target, but we also live a contradiction today – the access to progress, to treatment and prevention services is not the same for everybody. Our biggest challenge today is discrimination.”

These organisations form a massive grassroots network which provides support and treatment for AIDS-related illnesses across the world.

The care that such organisations provide is not just medical, but holistic. FBOs provide spiritual and moral support to people who are living with HIV and they also educate and focus on all aspects of the person in their treatment.

One of the aims of the two-day consultation was to improve collaboration among FBOs and in turn, their collaboration with other organisations.

“Many international agencies find it easier to deal with an interfaith group’ [rather than just one faith],” said Cardinal John Onaiyekan, Archbishop of Abuja.

Concerning how FBOs need to strengthen their work on HIV and AIDS, the following issues were identified: to gather more data and documentation about their work, to share best practices among their organisations, to communicate their work more strategically and to ensure their work gets the attention of global media.

During the consultation, UNAIDS committed to improving dialogue with FBOs at global and national levels and to organise regular webinars in order to share technical updates. UNAIDS also mentioned the possibility of organising a side-event at the World Health Assembly in order to help FBOs tell the stories about how they work on HIV and AIDS.

The consultation was a valuable opportunity for HIV experts to bring together their expertise and plan a way forward in improving access to treatment on a global level.

Caritas secretary general, Michel Roy, said, “Networking is so important. From now onwards, we need to increase this. We need to go on combining our expertise and experiences, while preserving our identities, principles and teachings . All of this combined will make our work so much more.”