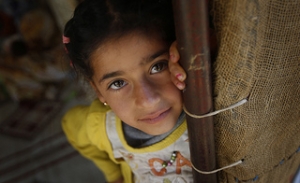 Caritas has been supporting partners build “child-friendly spaces” on the Turkish side of the border. Credit: Danny Lawson

More than one million children have fled Syria as refugees. Children who used to feel safe in their homes and schools have lost everything. Some have been injured, others have seen their parents killed or arrested. Most have heard planes circling, tanks rolling by, and machine-guns going off.

“The war has stolen the smiles of children: their joy, their laughter, and their happiness. It has stolen the things they need: their daily food, their games and their sleep,” said Malek, a Syrian refugee who is now working with child refugees in Turkey.

“All those children are missing out on everything related to life. They are surviving but not living. When someone is only surviving, without all those things they need to have a decent and good life, they die inside.”

Young children cope with difficult situations very differently from adults. They rarely talk about the way they feel or tell stories. They show their feelings through the way they act. Some are withdrawn and quiet, others are angry and aggressive.

Malek remembers how traumatised the newly arrived children were when she crossed the border into Turkey.

“Those first days in the tents, we gave the children paper to draw on,” she said. “They drew tanks, missiles, weapons and security centres – things that were sources of fear for them. Even when playing with Lego bricks they would make guns and point them at us, saying: ‘We will kill you.’”

How do you enable children to tell their own stories and understand what they have been through? How do you help children to make sense of the loss of their homes and their loved ones? How do they process that this is not the result of a one-off act of nature, but deliberate acts of violence by other people?

Caritas has been supporting partners build “child-friendly spaces” on the Turkish side of the border. These spaces allow children much-needed structure and routine, as well as a chance to play, relax and behave like children again. They provide a safe, supportive environment in which children can tell their own stories, express their feelings and start the long process of recovering a sense of normality.

Ahmed, who volunteers in one of the spaces, said, “The child-friendly spaces have been a real success. The children seem happier. They are only supposed to come to the spaces twice a week, but some want to come every day. Over the last few months I’ve seen it’s possible to make children smile again. It’s wonderful and fulfilling when we can do that for them.

“We had one child who didn’t want to come to the space at first. He was crying and clinging to his parents. But after working with him for a few months he started enjoying coming. And then one day he told his parents to go away and leave him there! This is a good thing. We need to give these kids happiness. It’s the one thing we can do.”

Even if the war ended tomorrow, it would take years for communities in Syria to recover, to rebuild, and to achieve any sort of reconciliation. We can help children to play, to be happy, and to find alternatives to violence – which gives refugees of all ages hope for the future.

Many of the volunteers have highlighted the fact that today’s children – the next generation – will be vital in achieving a sustainable peace.

Malek said: “I believe children can do something for peace. The concept of peace comes out often in the way they draw and play now. They draw pictures of planes flying away from houses and not bombing them, and tanks turning away. They are starting step by step to love again.”

Catherine Cowley is one of CAFOD’s Emergency Response Officers, who specialises in child protection.