Peace slow to trickle down in South Sudan 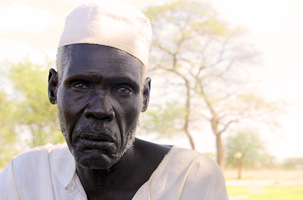 David Makul at the Magar IDP site in Agok, where he now lives. Photo by Faith Kasina/Caritas

David Makul, 70 years old, always hoped his sunset years would be spent with his family at home, bringing up his seven children while his wife runs their business.

Now forced to seek refuge in Magar camp for internally displaced families in Agok on the border between Sudan and South Sudan, an hour away from his home, those plans seem to be a pipedream.

“Life is difficult here. Three weeks ago, I used to have a home. Now I sleep under a tree. This is not my home,” he said.

Living conditions here are despicable. With no shelter, people spend their nights under trees, vulnerable to the rain and even to snakes.

There is only one borehole at the edge of the site that provides clean water. A few young men are almost done with constructing a latrine. Without sanitation facilities, there is a serious risk of diseases such as typhoid and cholera.

This is the reality for the nearly 5,000 people, mostly women, children and the elderly, living in Agok, forced from their homes in war-ridden areas like Mayom and Bentiu in the northern part of the country.

Caritas South Sudan and Norwegian Church Aid have helped by providing items such as blankets and plastic sheeting to 1,000 families spread in Agok’s three sites for people forced from their homes.

Peace dividends yet to show 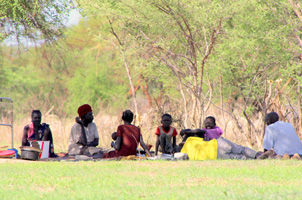 A displaced family shares a laugh under a tree that is now their home at the Magar IDP site in Agok. Caritas has distributed plastic sheeting, blankets and sleeping mats to families living here. Photo by Faith Kasina/Caritas

A new peace agreement calling for the cessation of hostilities between the warring parties was signed in mid-May in Ethiopia’s capital, Addis Ababa, springing up renewed hopes to the end of the crisis. Farmers would go back to tend their farms and families would go back home.

However, most families know little of the peace process as they lack radios and other communication media, greatly impeding their decisions to return.

“I will only believe that agreement when the guns are silent and I can take these young ones back to where they belong,” said David.

A bumpy 45-minute drive south east of Agok and into David’s hometown in Abiemnhom County, life seems to be going back to normal. People are returning home. Along the dusty murram road, young children brave the scorching sun, straggling behind their mothers laden with mats and water jerry-cans, eager to end their journey. Others are atop trucks, squeezed among mattresses and other household items, looking side to side as if searching for the familiar.

An uneasy calm hangs over the town. Every so often, armed trucks patrol the area as their personnel keep a keen eye out whilst walking from one end of the town to the other. Women chatter quietly as they sell their wares in their little open-air kiosks splattered along the main road. Men sit outside tea-shops engrossed in their conversations.

The area’s county commissioner, Arop Turuk, has sent three trucks to bring back families from Agok to their homes.

“We are encouraging people to come back because this is their home,” he said. “The situation is calm now and people need to come back and farm otherwise we won’t have easier times next year.”

Nyanlou Monylang, 43 years-old, just came back with her husband and seven children. They had been put up at the Majak Deng Kaya IDP site in Agok for the past month. Their longing for home could not keep them away much longer.

“We ran to Agok because people were fleeing and we were scared that we would be left alone,” she said. “But once we heard that it was safe to go back and saw people doing the same, we packed up and left. We may not have much, but we are home. We sleep safe at night and leave God to solve everything.”

Further on in our journey, and our driver tunes the radio to a station playing hymns. A news reader soon comes on with news of fresh fighting in another part of the country. 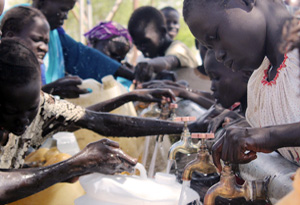 Children fetching water at a borehole at the Majak Deng Kaya IDP site in Agok. Photo by Faith Kasina/Caritas

“I know nothing about the deal and I’m not sure how my opinions will help,” said Nyanlou. “All I know is someone has to hear us. We have been running for many years and we need to stop.”

The South Sudan Bishop Conference Secretariat has partnered with the Catholic Radio Network in disseminating information on the progress of the peace talks, through seven local radio stations throughout the country. Listeners are also encouraged to call-in and share their views.

“In any crisis, many of the affected people don’t have an opportunity to speak out and end up forgotten,” said Gabriel Yai, Executive Director of Caritas South Sudan.

“It is important that communities, and especially internally displaced people, have a platform through which their voices can be heard and their needs can be addressed in an effective way. The more informed they are the better control they have of their future,” he said.

“When I look at my children and the situation they are in now, I lose faith,” he said, throwing a tender look at his youngest son seated beside him. “I don’t see us going back any time soon but one day, we hope to return,” he said.