Epic floods in India and Pakistan 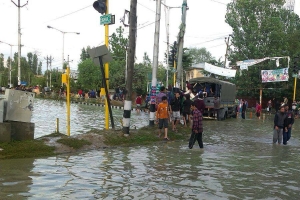 The Chenab and Jhelum rivers rose dramatically at the weekend, causing massive destruction, with smaller rivers also overflowing. Hundreds of villages have been submerged, forcing hundreds of thousands of people from their homes and leaving hundreds of people dead.

“We’ve had rain earlier but never so severe and never so much. It rained continuously for 7 days,” said Mohammed Hussain , whose house was damaged in Jammu and Kashmir in India. “Three generations had lived in this house.”

In Jammu and Kashmir in India, Caritas India say the priorities are to provide shelter for those forced from their homes, clean drinking water and food, medicine and other aid like blankets and cooking equipment.

As many as 60 major and minor roads have been cut off and over 30 bridges washed away, hampering the relief and rescue operations.

Caritas India’s Prakash Singh has been to the city of Srinagar, one of the worst-hit areas.

“Conditions in Kashmir are very bad. Health facilities are all damaged, there is no water and no electricity,” he said. “I saw the valley filled with water, as high as 25 ft. I couldn’t move 500 m from the airport. Srinagar airport is the highest in India. If the flood has reached its boundaries, we can only imagine what is the condition of the people.”

Babita Alick, Team Leader for Disaster Management for Caritas India, said, “We are ready to move in with all our pre-positioned sanitation, food and water kits.

“Besides, basic essentials like drinking water, sanitation kits, clothes, family tents and bedding, we hope to send paramedics to assist people recover from one of the worst nightmares in a decade. Caritas can foresee a massive task ahead.” 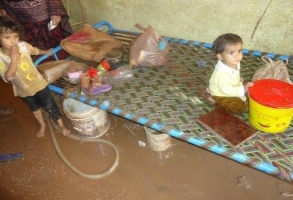 In Punjab and Azad Jammu and Kashmir in Pakistan, hundreds of villages have been washed away, embankments broken, roads damaged and power lines downed. Flood water has ruined crops stretched across thousands of acres. Many people have lost their livestock.

Two Caritas Pakistan teams are in the field. They say thousands of families are in need of food and safe drinking water.

Caritas Pakistan is already providing ‘non-food’ kits to affected families in Lahore and Rawalpindi dioceses as it assesses how to respond further.