Right to food: a concrete utopia

It began with a minute of clapping rather than silence because the world’s hungry “would not like us to be silent”. On 13 October,  The Right to Food: A Concrete Utopia event in Rome hosted speakers seeking to make the world hunger-free.

The event took place during a key food security meeting organised by the UN. Raquel Gil Gomez of Caritas Spain was one of the speakers at the event. She presented a project implemented by Caritas in Guatemala and Nicaragua to monitor the state of the right to food in those countries.

Among the main findings she presented were the need for revision of national tax policies that keep large corporations exempt from taxes, to improve dialogue between governments and civil society, to adopt legislation on the right to food and to support family farming.

The study presented is an example of the Caritas commitment to fight hunger in the world, for the realization of our utopia – one single human family with food for all women and men. Under the Campaign “One Human Family, Food for All”, Caritas promotes advocacy and social participation initiatives on the human right to adequate food. 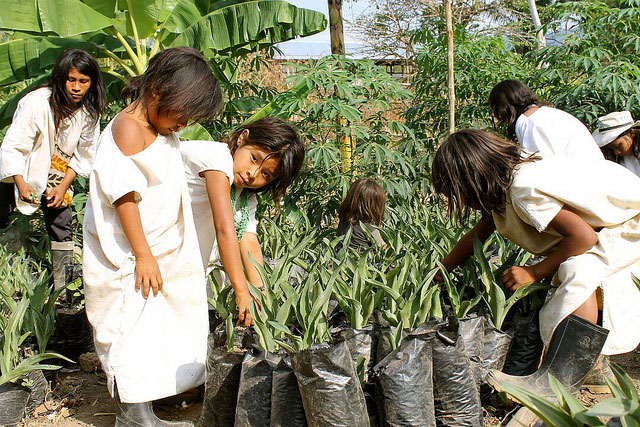 Flavio Valente of FoodFirst Information and Action Network said that the right to food does not mean that wealthy countries should be solely responsible for feeding the world’s poor.

“We do not expect anyone to feed us except ourselves,” he said, but developing countries must not be prevented from feeding themselves because of unfair trade practices, one-sided agribusiness deals and other obstacles.”

“They try to spray us with Round-Up,” Valente said, referring to a pesticide, “but we will be holding the powerful accountable.”

Svetlana Boincean of the International Union of Food Workers underlined the right to collective bargaining and a living wage for workers of the food sector. Noting that in some places “people have only one plate of food per day,” she criticised groups that promote non-food approaches like nutritional supplements as solutions to hunger.

“We need an additional plate of food, not an iron supplement or vitamins,” she said.

Biraj Patnaik of Right to Food Campaign India noted that while India has passed and enforced laws related to people’s right to be free from hunger, “there are no legal entitlements for access to land, water and more.” National policies “can give with one hand and snatch away with another.” On the other hand, he criticised the incoherence between food policies and trade agreements.

The UN’s new Special Rapporteur on the Right to Food, Hilal Elver, spoke of worst-case and best-case scenarios for food security in the future. In the best case, one example would be “a tribunal for food security with jurisdiction over corporations,” she said.

A final comment from the audience discussed the problems of deregulated markets and free trade agreements. “The big companies have all the power,” said Javier Sanchez of La Via Campesina. During the recession, governments “found millions of euros, within hours, to save banks. What about the Right to Food?”