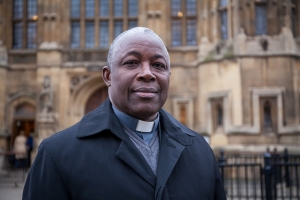 Archbishop Edward Thamba Charles of Freetown, the most senior Catholic cleric in Sierra Leone, outside Westminister before speaking to UK lawmakers on Ebola. Credit: Cafod

Although new Ebola cases are declining, there was no room for complacency, said Archbishop Edward Thamba Charles of Freetown, the most senior Catholic cleric in Sierra Leone.

“Even when there are no new cases, we will have to be on our guard,” he told a meeting at the Houses of Parliament in London. “We need to give the right prevention message, so that we don’t lose what has been gained.”

Cafod (Caritas England and Wales) has been working with Caritas and other Church partners  since the outbreak began. The work includes training volunteers in spreading Ebola prevention messages within their communities, providing outbreak prevention kits – made up of protective clothing, bleach and cleaning materials – to places of worship, scaling up distributions of food and household items to quarantined families, and training and setting up safe burial teams in Kambia in the north of Sierra Leone.

Christian and Muslim leaders were in a “unique position” to influence people across political, class, and tribal boundaries, said the archbishop.

“They trust us, and are more willing to listen to us than to politicians.” Archbishop Charles is vice-president of the Inter-Religious Council of Sierra Leone, whose experience in dealing with the effects of the country’s devastating civil war was invaluable in reacting to the Ebola crisis.

“We were not prepared; our health systems, our social services, our communities,” said Fr Peter Konteh, head of the Caritas aid agency in Freetown. “Ebola in one hit toppled us over, and in times of crisis it is often the Church and its institutions that remain standing. So we quickly had to mobilise ourselves.”

“We are a touching culture, and it has been painful not to greet someone in the way that we are accustomed,” said Fr Konteh.

“For priests not to hold the hands of the dying, not to anoint the dead – these things have been difficult. But we have been able to change our habits. At church we bow and put our hand over our hearts for the ‘sign of peace’ [instead of shaking hands].”

Cafod, along with Christian Aid and Tearfund, has called for the role of religious leaders to be recognised when future recovery plans to combat Ebola are drawn up. “There was a significant missed opportunity in not involving faith leaders further at the very start of the outbreak,” the three aid agencies said in a joint statement. 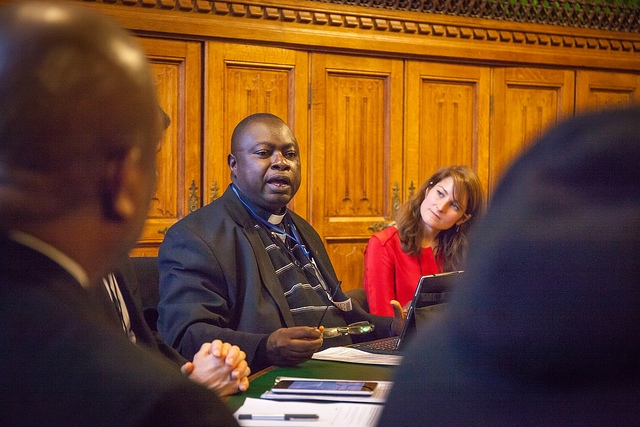 During the meeting in the Houses of Parliament, Archbishop Charles explained how religious leaders have been crucial in dispelling myths and suspicions aroused in the early days of the outbreak, when masked burial teams took bodies away to be buried in mass graves. Rumours spread that organs were being taken from the dead. Relatives began hiding Ebola victims and burying them secretly, worsening the spread of the disease. The authorities were persuaded to allow a small number of relatives, accompanied by a pastor, priest or imam, to witness burials, and graves were marked for later identification, giving the dead more dignity.

In the joint statement Cafod, Christian Aid and Tearfund called for dedicated funding for training, particularly in counselling for faith leaders. They said: “Although faith leaders are well trained to provide spiritual care, most have not been trained in counselling so there is a strong need in this area of work”.

Combating the stigma attached to Ebola is one of the main tasks still facing religious leaders, said the archbishop. “It is not a punishment from God or a divine plague, but a disease like any other,” he said.

Survivors were often treated with suspicion in their communities, so international support was needed to train Christian and Muslim clerics in trauma counselling.

“Many children lost one or both parents. Widows with children lost their husbands, making them vulnerable,” said Archbishop Charles. “We are thinking about reopening schools at the end of March, but the children are traumatised. The whole nation is traumatised.”

Both Archbishop Charles and Father Konteh praised Britain’s response to the Ebola crisis.

“We are grateful for the timely intervention of the UK and others, not just in giving money but in the willingness of people here to volunteer, even if they had not previously been able to find Sierra Leone on a map,” said the Caritas head. “It shows we are all one family.”

Please click on this link to find a PDF of the joint briefing paper.