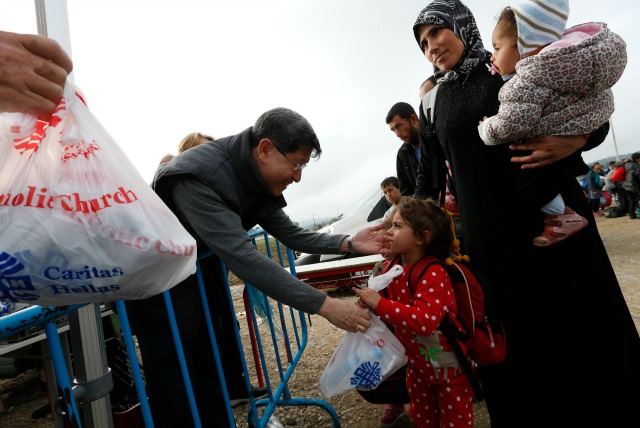 Cardinal Tagle takes part in a Caritas aid distributions to refugees and migrants at a border crossing in Greece. Paul Haring/CNS/Caritas

“Everyone has seen the images on television, yet it’s still a shock when you witness the refugee crisis firsthand,” said Cardinal  Louis Antonio Tagle of Manila after a visit with Caritas to a transit camp for migrants and refugees in Idomeni on the Greek border with the FYR of Macedonia on 19 October.

“You see the confusion, the tiredness and the fear on their faces,” said Cardinal Tagle, who is the president of Caritas Internationalis. “Many are coming because they’re fleeing wars that they didn’t start and that they don’t understand. Surely we can do more for them. Surely nations can get together to lessen this suffering.”

Over 600,000 people have crossed the Mediterranean in 2015, 90 percent fleeing from refugee producing countries like Syria, Afghanistan and Iraq. Two-thirds cross by sea from Turkey to one of the eastern Greek Islands, then by ferry to Athens and by bus to the border.

The coaches arrive by the half dozen every morning and afternoon in Idomeni, a tiny hamlet of 120 souls now swollen by 5000 constantly changing faces each day. Most are Syrians. The country has been haemorrhaging people as 5 years of war just gets more messy and bloody by the day.

“Why do you think I left,” said Mohammed, a twenty something electrical engineer from Damascus, in perfect English, as he queues to receive a Caritas food package. “My studies are finished. I don’t want to be conscripted. I don’t want to die in the war. My future is across those tracks.”

Amin fled conflict and poverty in Sudan 17 years ago. He went to Syria, where he married Sambra. But war caught up with him again. They fled to Turkey. All but one of his four children were born in Syria. The latest though was born seven days ago on 13 October on the Greek island of Samos. “I was unable to work in Turkey. Hospitals cost money. So we left,” he said. 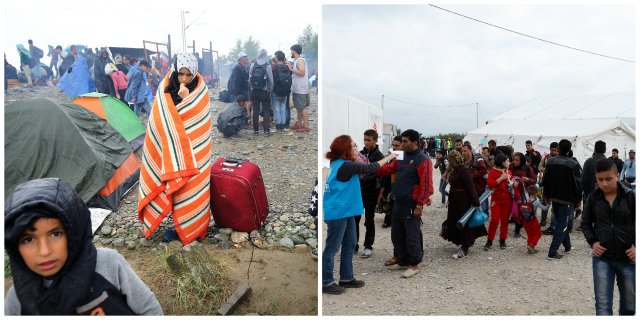 Volunteers for Caritas Greece (known locally as Caritas Hellas) give out food and water to the refugees and migrants. “It’s tiring work,” said Sous Issam, a volunteer for Caritas in Thessaloniki. “There is no break. The stream of people is constant. But we’re doing what we can to help.”

The refugees and migrants stop in Idomeni for as long as it takes for police to allow them to safely cross the train tracks that mark the border to Macedonia, and then onwards to Serbia, Croatia and Slovenia, with their final destination being Germany, Belgium or Sweden.

“In September, people were just sleeping on the train tracks. There were no tents, no medical support, no toilets, little organised help,” said Sous Issam. As well as giving out food and water, Caritas has also built 40 toilets and five shower units.

“Now it’s much better. The refugees arrive, get something to eat, clothes for the children, a place to go to the toilet and to wash and information for their onward journey. It’s well organised,” he said. “Winter and the coming bad weather is going to be the next challenge.”

Speaking to Catholic News Service, Cardinal Tagle said, “For this project, Caritas Hellas has only one paid person. All the others are volunteers, taking turns to serve food, to sort out donations of clothing and coming here to spend the day or evening with the refugees — that is Caritas.

“Yes, Caritas Hellas is the beneficiary of a lot of goodwill and donations from other parts of the world. In the end, without the warm bodies, without the spirit of volunteerism, without this DNA for refugees beating within me, telling me, ‘go out and serve them, they are brothers and sisters,’ Caritas as an institution will not survive.

“Caritas is Caritas because of those simple people who give of themselves.” 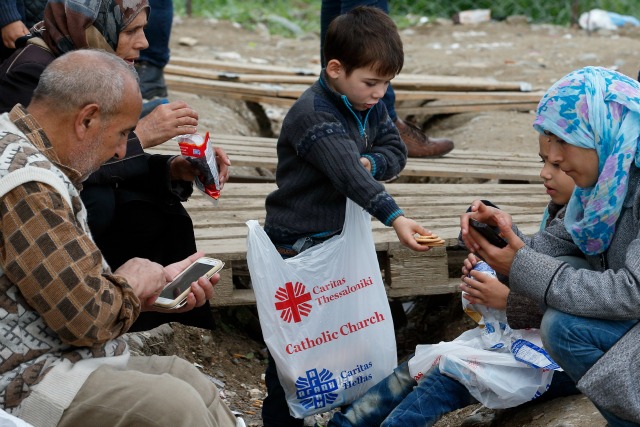 Caritas Greece provides food, water and toilets to refeugees and migrants at the Idomeni crossing point in Greece. Paul Haring/CNS/Caritas

Currently in Rome as one of the Synod on the Family’s presidents, Cardinal Tagle was encouraged by Pope Francis to use a break in proceeding to see how the crisis is unfolding.

Cardinal Tagle has witnessed emergencies before. “In the aftermath of Typhoon Haiyan in the Philippines two years ago, people were in a desperate state, but there was a belief that they could rebuild their homes,” he said. “But the refugees I met don’t have the same hope. They come with nothing save what they can carry on their backs and their families. Their only wealth is their family. It’s for the future of their families that they have undertaken such a perilous and hard journey.”

Speaking to Vatican Radio, Cardinal Tagle said: “You see the parents caring for the children, and the children smiling so innocently, not knowing what’s happening and finding solace in the arms of their parents – it breaks your heart.

“Conflicts, poverty and human smuggling are not exterior to the families, they hit the family at its core. We hope the eyes of the world will save the family and see the ill consequences of failed politics, of failed approaches to peace, the use of arms and the lack of respect for people who differ from us in terms of culture and religions.

“It’s the innocence of the family that is really destroyed”.

After seeing a father and daughter together in prayer in the camp in a moment of “pure, pristine love”, Cardinal Tagle said, “We hope the whole world will work for peace, equality and humanity for the sake of these families”.