Caritas is launching an emergency appeal for funds to support almost 35,000 people suffering from hunger and the instability caused by the civil war in South Sudan. The appeal is for €2.1 million euro and will help people for the entirety of 2016.

The two-year conflict made 2.2 million people flee their homes, it damaged infrastructure, schools and hospitals. Hundreds of villages were burnt and many people killed and left communities hungry and in poor health.

Executive director of Caritas South Sudan Gabriel Yai says, “In 2016 we’re going to reach out to the people hardest hit by South Sudan’s civil war. We don’t want to just provide food, but we also want to provide them with the training and tools to produce their own food and to gain access to a water supply. We intend to help people rebuild their lives and we will provide the necessary opportunities to work together and to reflect on how to achieve real and long-lasting peace and reconciliation.” 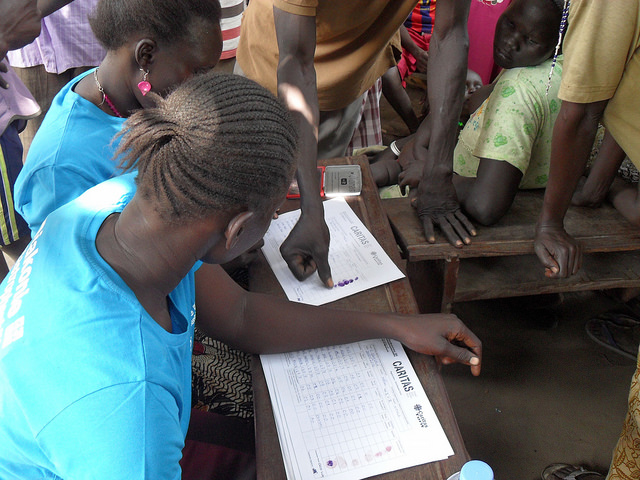 By September 2015, 7.5 million people – nearly two in every three people in South Sudan were going hungry. Half of those people were suffering from severe hunger. In some households people were dying after prolonged periods without enough food. Up to 200,000 children in the Diocese of Rumbek are in a “dire humanitarian situation”, according to Caritas staff.

The funds raised would cover vulnerable households in the dioceses of Rumbek, Yei, Malakal, Juba and Tambura Yambio. The Diocese of Malakal is the hardest-hit area with two-thirds of hungry people residing there. This diocese is also the worst affected by the conflict that started in 2013.

The fighting displaced huge numbers of people and food production has been greatly affected by the conflict as people left their fields uncultivated when they fled to safety. Livestock were looted and killed during the period of instability and planting was delayed.

Many people who left their homes suffer from health conditions such as malaria, typhoid fever and skin diseases as a result of drinking polluted water and eating a poor diet.

Caritas South Sudan is the newest member of the Caritas confederation as it joined in May 2015.