Caritas says that people fleeing attacks by Boko Haram fighters in southeast Niger are in desperate need of aid.

Around 100,000 people were driven from their homes in Niger in December and January by cross-border terrorist fighters as 170 villages had been emptied. 100,000 refugees from Nigeria have also fled to Niger.

Caritas Internationalis is launching an appeal for Euro 830,000 to provide food, shelter, basic aid, clean water and sanitation to 15,000 people, including those displaced and host communities. Caritas will also train 500 young boys and girls on peace building activities.

A man stands by a under construction toilet at a camp of displaced people in Diffa in Niger. Caritas undertook a distribution of mosquito nets, cooking pots, sleeping covers, hygiene kits, clothes and cash transfers to the displaced. Sam Phelps/Caritas

“People fleeing the atrocities of Boko Haram are crammed into makeshift camps, living in abject poverty. They’re sleeping in the open or under trees. The conditions are inhumane. They’re without shelter, clean water and food,” said Raymond Yoro, national executive secretary of Caritas Niger (CADEV-Niger).

“They’re haunted by the same atrocities. They say for Boko Haram ‘to kill is just a game’. Many have no news of kidnapped relatives, husbands, women and children,” he said.

Most of those displaced from their homes are women (60 percent), children (25 percent) and the elderly (15 percent). There is no school system in place for the children and the housing is not adequate for many as more people arrive each day escaping hostilities.

“We came here 9 months ago after Boko Haram burnt down our village during the night and we fled into the bush. They killed more than ten people,” said Fatima Brah, 16 years old, speaking from the village of Guidan Kaji near the border with Nigeria on the outskirts of Diffa in Niger.

“We left with nothing, not even clothes or food. We threw the children in the car and the rest of us came here on foot. All the clothes we are wearing were given to us by the people in a nearby village,” she said. 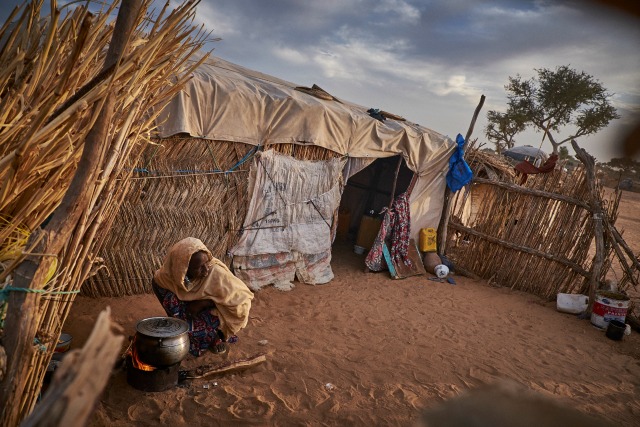 A woman cooks in a camp of displaced people in the neighbourhood of Chateau, Diffa, Niger. 228 households received support from Caritas among an estimated 1500 households in the vicinity of Chateau.  SamPhelps/Caritas

Host communities cannot to provide help to the displaced and to the refugees without outside assistance. Niger is struggling to manage its own food crisis, with 1.3 million children and 300,000 new mothers threatened by hunger.

In Diffa, there is a cereal deficit of over 80 percent  and almost the entire population of the region is in need of food aid.

Boko Haram attacks have left at least 17,000 dead and forced more than 2.6 million from their homes since 2009. They are ranked as the world’s deadliest terror organisation. “The people’s ultimate hope is that peace and security can be re-established,” said Raymond Yoro of Caritas.