Do the human traffickers see human beings in those they are exploiting? 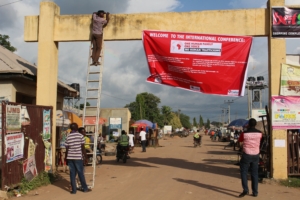 Caritas Nigeria colleagues prepare for the One Human Family, One Voice, No Human Trafficking conference

At our conference One Human Family, One Voice, No Human Trafficking in Abuja, Nigeria, two survivors of trafficking told us just what it was like to be treated as a commodity rather than as a person.

Eleanor* was just 13 when her family decided to send her to an uncle’s house near Nairobi so she could go to a nearby school. The uncle took the money for her education and enslaved Eleanor for a year. She couldn’t go out and was made to clean her uncle’s house and look after his children. She was also sexually abused by another relative during this time.

Eleanor managed to escape after a year. The fact that it was a family member who was exploiting her made it all the worse. For a long time afterwards she suffered from trust and anger issues, but slowly she recovered and decided to use her experience to help other women who’d been abused.

Speaking on the human ecology and the causes of human trafficking at our conference, Cardinal Luis Tagle, president of Caritas Internationalis, asked whether the trafficker even considered their victims as people.

He said, “Slavery starts when people do not respect their own humanity, their bodies and their spiritual potential. They see themselves and consequently other persons as mere instruments or objects to attain some goal, especially money, profit, influence or power.

Rebecca, another survivor, told us just how easy it is to fall into trafficking for prostitution. She was living in Edo State, Nigeria, and repaired computers for a living. A woman whose computer she repaired asked her if she wanted to work with her brother in Italy, where she’d earn more money than in Nigeria.

She trusted the woman so the opportunity to improve her life seemed too good to miss. But once she got to Naples she was told she owed E65,000 and she would have to pay it back by walking the streets.

“I’d read the papers and I’d seen many trafficking awareness campaigns in my country. I have a university education and I knew that traffickers existed, yet I was tricked into becoming a victim,” says Rebecca.

Rebecca was lucky in that she managed to escape after a very short period and report what had happened to the police. She knew that she couldn’t talk to any of the other girls about her intentions.

One of the things that’s struck me when talking to women trafficked for prostitution in the past is that it’s often a woman rather than a man who tricks them in the first place. The breaking of this bond of trust is compounded by the fact that often women walking the streets are encouraged to inform on each other to the people who control them so that they’re completely isolated. Escape in such circumstances becomes very difficult.

Women are also fearful about escaping because they may have gone though a traditional initiation ritual during which they or their families are threatened with death if they try to escape.

Rebecca now works with an anti-trafficking organisation. She says, “It’s important that women see that someone has managed to escape and that nothing bad has happened to her or her family.”

Our conference was held to connect up Church and faith organisations with officials and others working on trafficking and encourage them to work together to put an end to slavery and to give a voice to victims.

Sr Agatha Osarenkhoe EHJ from the network of religious sisters Talitha Kum, and president of the Nigeria Conference of Women Religious, said to us, “Here is an invitation that propels us to action: “But you must defend those who are helpless and have no hope.  Be fair and give justice to the poor and homeless” (Proverbs 31:8-9). We could go on with many Scripture passages, but the bottom-line is that we try to be our brothers’/sisters’ keeper. Those who are downtrodden and are in bondage.”