Caritas working against human trafficking at an international level

A few months ago Pope Francis turned up unexpectedly at a judges summit on human trafficking and organised crime which was being held in the Vatican.

He told the judges that in the fight against trafficking we needed to create a “crosscutting wave of good vibes” to embrace all corners and levels of society “from villages and public opinion to the key players in society”.

Caritas not only helps trafficked people by giving practical help and advice in towns and villages, but we also try to influence public opinion and advocate to key players as the Pope has called us to do.

Last week I went to the the Conference of the Parties (COP8) to the United Nations Convention Against Transnational Organised Crime. This is a meeting of the states signatories of the Convention Against Transnational Crime and its protocols. It’s organised once per every two years by the United Nations Office on Drugs and Crime (UNODC) in Vienna. This office has a mandate to assist member states in combating crime and terrorism, including human trafficking.

Caritas goes to meetings like this to listen and learn possible ways of advocacy, as well as to bring concerns and expertise of member organisations to the international arena. It is also one of our priorities to serve exploited people and this includes the promotion of justice and the protection of human rights at an international level. We do it pronouncing statements on behalf of the Confederation and with collaboration with other faith-based or civil society organisations.

In September we held a conference in Abuja, Nigeria to discuss how to work better together on trafficking within and out of Africa. There were Caritas and bishops conferences’ representatives from 43 countries including ones from Anglican, Lutheran and Muslim communities, from governments and the former UN special rapporteur on trafficking. 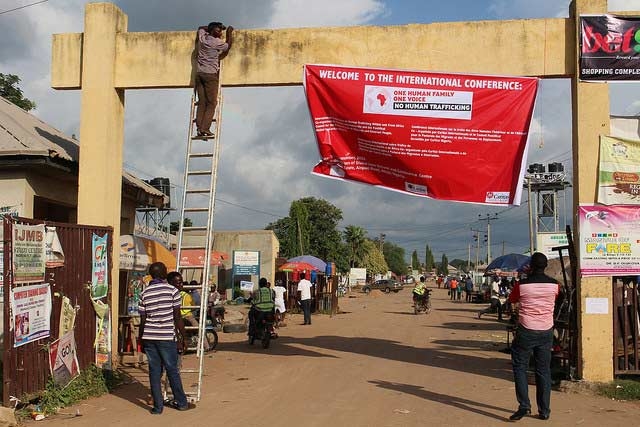 The One Human Family, One Voice, No Human Trafficking conference took place 5-7 September. It was organised by Caritas Internationalis and the Pontifical Council for the Pastoral Care of Migrants and Itinerant People and hosted by Caritas Nigeria. Photo by Caritas/Anna Bartošová

What emerged from the conference was that there needs to be more a robust collaboration between government agencies (especially regarding law enforcement agencies) and civil society organisations (CSOs) for an effective response to trafficking.

Victims have considerable confidence in CSOs, including Church structures, to accompany them during legal procedures. Churches and faith-based organisations are able to reach the most vulnerable communities, and to build trusting relations and educate communities. They are also well-placed for raising awareness.

However, fighting for the rights of trafficked people at an international level is very challenging. Even though states have adopted the Convention Against Transnational Organised Crime and its protocols including the Protocol to Prevent, Suppress and Punish Trafficking in Persons, Especially Women and Children it doesn’t necessarily mean that they will implement it. There still isn’t a review mechanism to objectively evaluate the status of implementation.

CSOs such as Caritas have very little space at this gathering to contribute to discussions or influence the process to ensure the implementation of the convention and that such a review mechanism will be established. For this reason there’s scarce participation of CSOs at the Conference of Parties. We’re given the opportunity to read out a statement or participate in a side event where the main audience are other NGOs or states which are sympathetic to our topic.

A review mechanism would be aimed at making countries accountable for how they protect people from trafficking. But also, once adopted, it could become a place where NGOs can have a real discussion with states and challenge them about the implementation of the protocol on trafficking. But states are dragging their feet and it seems to be a long way from being adopted.

Having said this, the international community does have a “plan b” which aims to ensure protection and justice for trafficked people – the Sustainable Development Goals (SDGs).

With the SDGs, there is a possibility to monitor states’ anti-trafficking efforts because three targets explicitly address these issues:

The anti-trafficking targets in the 2030 Agenda for Sustainable Development are one way to ensure the accountability of states. Moreover, the SDGs are a comprehensive and forward-looking framework which draws together the rule of law, human rights and development. They ensure global efforts to tackle poverty and injustices such as human trafficking are measured through specific indictors.

As Caritas president, Cardinal Luis Tagle, said of the SDGs, “They lay out a path of hope on which we will travel together.”

To travel this path together, we need to make sure that we can hear the voices of everyone at all levels. We need to bring these voices to the international community so that real change happens.

Read Caritas’ oral statement to COP8.
Read about Caritas’ work on SDGs.
Read the Final declaration of the participants of the International Conference on Human Trafficking within and from Africa,