Pope Francis asks Caritas to have a prophetic courage

This cold November morning leaders from the Caritas Internationalis confederation undertook a short pilgrimage which ended with a meeting with Pope Francis.

They walked up the broad avenue which leads up to Saint Peter’s Square. Once there they filed through the Holy Door at the basilica, slipping through just a few days before the Holy Year of Mercy ends and the door closes for a long time. They had Mass in a small chapel and then waited for the pope in the magnificent Sala Clementina.

Pope Francis put aside his prepared speech and said he preferred to have a private dialogue with Caritas. A break with protocol and a much-appreciated gesture of informality. 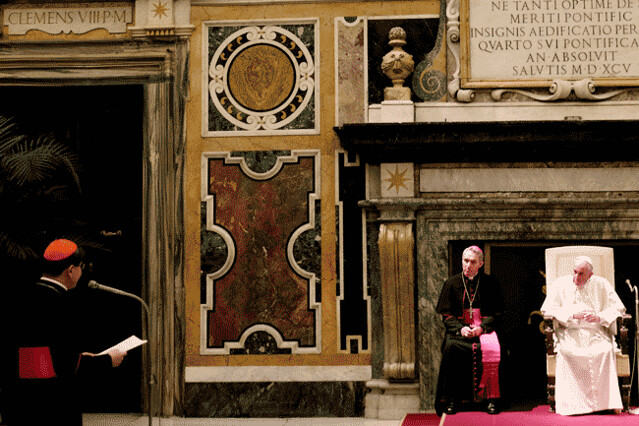 Cardinal Tagle, at the beginning of Caritas audience with Pope Francis. Photo by Nicholson/Caritas

It was a small group of around 60, from the four corners of the world. The core of the group was Caritas Internationalis’ representative council (REPCO), which comprises our president Cardinal Luis Tagle, a number of bishops and Caritas leaders from various parts of the globe. There was also CI staff from Rome, Geneva and New York.

Msgr Antoine Audo, president of Caritas Syria was the first to approach the microphone to speak to the pope and open the dialogue.

Afterwards he told me, “What amazes me is how Pope Francis is always very much himself. He wants to listen and then say sincerely what he thinks. This creates a dynamic of encounter. When he put his speech to one side and said he wanted to talk with us, that really knocked down walls.”

The conversation Caritas had with Pope Francis, touched on global issues close to our heart. One of these is migration. In 2017, the confederation will launch a global campaign on the issues.

Referring to the campaign in his prepared text, Pope Francis has written, “It is my hope that this fine initiative will open many hearts to accepting refugees and migrants, and making them feel truly “at home” in our communities. Let it be your care to support with renewed commitment, processes of development and paths of peace in the countries from which these brothers and sisters are fleeing or have left behind to seek a better future.”

This morning @Pontifex asked staff and representation of @iamCaritas around the world to have a prophetic courage. https://t.co/fuG56QeAe7 pic.twitter.com/MdrfgSJslU

The pope also asked us to “have prophetic courage in rejecting everything that demeans human beings and to be “peacemakers and reconcilers between peoples, communities and believers.”

He called us to work with other faith communities and to not only combat poverty, but to also learn from the poor, “from their values, their sense of solidarity and sharing, their ability to rebound from difficulties, and above all their lived experience of the suffering Christ”.

At the beginning of the audience, Cardinal Tagle said to the Holy Father, “We will never stop being amazed at the testimony of enduring courage, hope and love which flower even in the deserts of violence and pain.”

Cardinal Tagle also asked the pope to bless “the humble efforts of Caritas Internationalis, so that in our little acts of love the world can contemplate Jesus, the merciful face of God”.