My parents used to work hard to put me in school back in Honduras. I figured out my parents didn’t have enough to send me to school or college and offer me the opportunities I wanted to have.

Also, there were gangs in Honduras who would kill you if you didn’t want to join them. I saw two of my friends killed. I hid because the gangs were looking for me too.

I left my Tegulcigalpa, the capital of Honduras, when I was 12 years old with two other boys aged 12 and 14. We took a bus to the border of Guatemala. I was scared we’d be followed by the gangs. 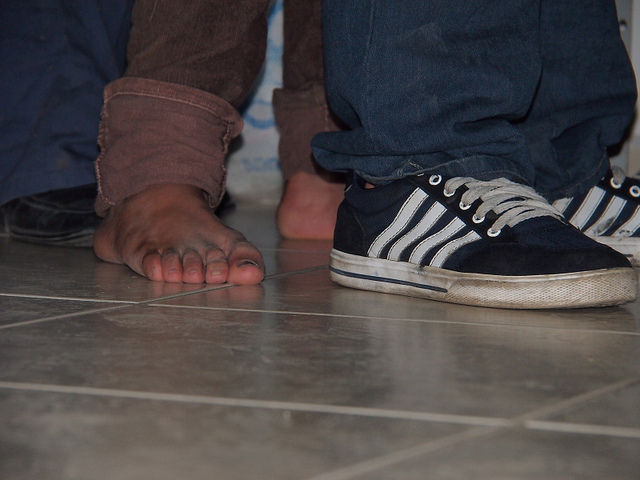 In Mexico, at the House of Charity in San Luis Potosi, Caritas provides a resting place for thousands of migrants, some of them arrived on foot. Photo by Worms/Caritas

We walked through the mountains to pass the border. Then we hitched rides to the border of Mexico. We walked for a week, day and night. We had no food and water and we ended up drinking cow urine. One of my friends died on the journey but me and my other friend had no choice but to continue on our journey.

We rode on the roof of trains to get through Mexico. Once we got to the border I stayed there for two and a half years living in a migrant house and having to ask for food as I had no money.

I managed to cross the border by myself. Someone in a car came up to me after I passed and said “I’m here to help you”. He took me to his house and there were 15 migrants there. Then he took us all away in a refrigerated truck full of melons.

We were stopped at a checkpoint in near Indio in California. It was so cold we felt like we were dying.

We were taken to a house and when I woke up the next morning, the other migrants had gone. The man said they’d paid their money to pass the checkpoint. He wanted US$4000 to release me. I phoned the number of family I had in the US but no one answered.

In the end the man took me to Los Angeles to work for a furniture firm, when I was just 16. I used to work 6 days a week, 6am to 6pm. He used to pay me US$120 every two months. Initially I was happy, but only because I didn’t understand the money and I didn’t have any information. When I realised the others were paid much more I was sad. I worked there for two years.

Eventually another man helped me leave and gave me a place to live and helped me find work as a dishwasher. But I was stopped by the police one day for riding a bike without a light.

I was in a detention centre for 18 months. They gave me three choices: 1)Be deported 2)They would let me go until I was 21 3)Or they would let me go to another state and the government would give me education until I became someone in life.

They gave me one minute to call someone and I called the man who had helped me get the dishwasher job and asked him to help me. I’d worked hard for him. He said he’d help me and he said he was my dad because we had the same surname and they let me go. He took me to live in his brother’s house until I was 18. 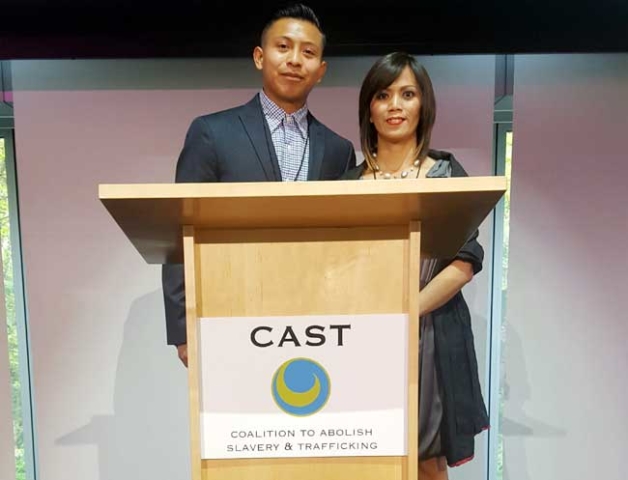 Jimmy Lopez (L) spoke in an anti-trafficking event to raise awareness on the issue. Photo by Caritas

I now live in Los Angeles where I work at the airport. I’m also studying at high school and working towards a diploma in computing.

I’m passionate about justice and the rights of children. When you get taken to a detention centre, they treat you as a criminal just for being undocumented. I want to shine a light on these issues and allow more victims and survivors to have access to justice. I just want to  give back what I received.