More violence in Eastern Ukraine, thousands are without water and power

Caritas fears for a humanitarian emergency in eastern Ukraine following an upsurge in fighting between government forces and Russian-backed separatists.

Fighting in the frontline town of Avdiivka has cut water and power to most of the 25 000 inhabitants, while temperatures have fallen as low as -17C. Caritas Ukraine has distributed emergency food packs to 1 000 households containing enough supplies for 2-3 weeks and will distribute another 1 000 packs along with cash grants. 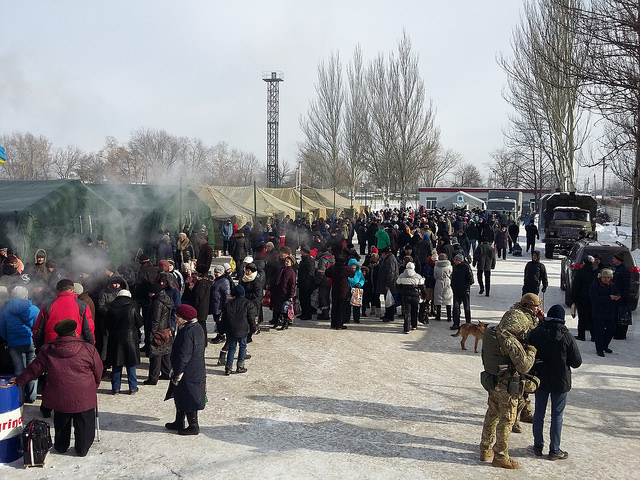 “People are very afraid here,” says Hryhoriy Seleshchuk, Head of Humanitarian Projects at Caritas Ukraine. “Afraid when there is shelling and even more afraid when there is not – because they don’t know what is happening, what will come next and how they will survive. ”

Caritas Ukraine has deployed an emergency team of 5 staff to Avdiivka and has pooled resources from Caritas Mariupol, Caritas Kramatorsk and Caritas Zaporizhya to set up rotational teams offering medical and psychological and social care. They have provided sleeping bags, emergency medical kits, fuel and candles and are sourcing warm clothing.

Caritas Ukraine is also on standby to help local government officials carry out an evacuation plan should conditions deteriorate further.

“Many people are reluctant to leave their homes though,” says Hryhoriy Seleshchuk of Caritas Ukraine. “They says they feel safer in their basements than somewhere else as they know that as many as 19 people have been killed by the shelling of the past few days. Some also know people who relocated in previous fighting and lost their jobs. The situation is very tough. I spoke to one old lady who is very, very stressed because she fears no one will come to help her.”

Over one third of the people in Avdiivka are pensioners who need increased support from Caritas. 2 000 others are children and the town has higher than average numbers of orphans and people with disabilities. Caritas is working in cooperation with other humanitarian organisations to deliver as much help as possible.

The priorities are food, heat and water – which has just been restored for a couple of hours a day. Local authorities are working on restoring electricity for heat in the freezing weather but some people have had to resort to cutting down trees to burn.

Almost 10 000 people have died in the conflict in Ukraine which began in 2014 when Russia annexed Ukraine’s Crimea peninsula and pro-Russian rebels launched an insurgency in the east.

Both the government and rebel forces say the other side is responsible for the recent breakdown in the ceasefire. Imprecise weapon systems have been used which cause rockets to rain down over wide areas where civilians live.