As countries pledged $344 million for the Rohingya refugee crisis at a UN conference in Geneva yesterday, Caritas underlined the urgency of translating promises into practical help. 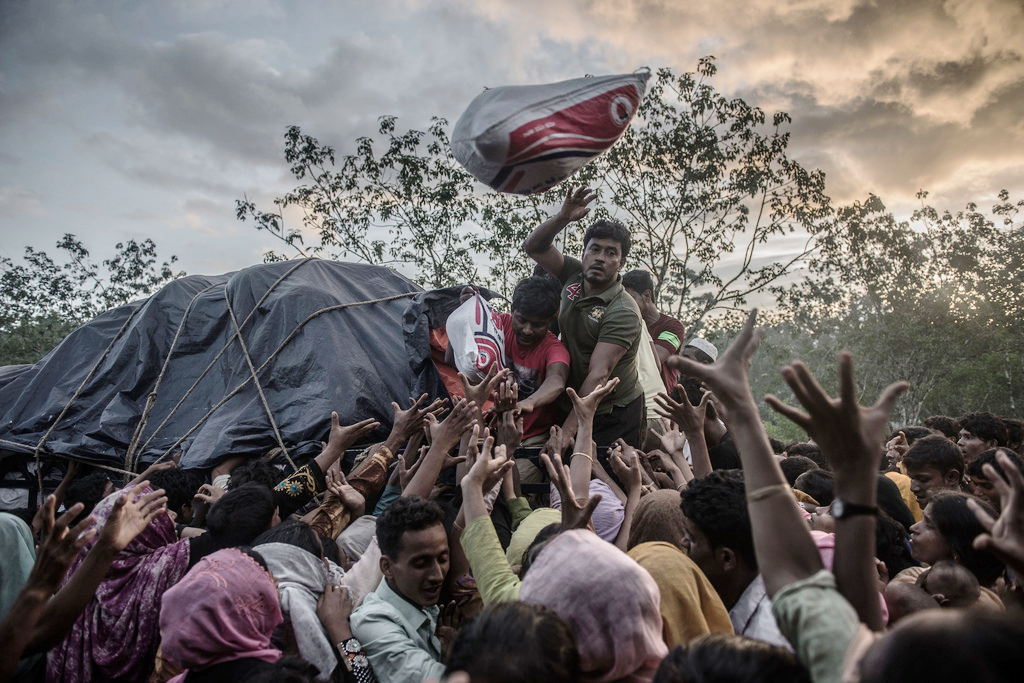 Distribution of aid by a volunteer organisation in Kutupalong camp in southern Bangladesh. Photo by Tommy Trenchard/Caritas

“Countries must honour their pledges and allocate the money rapidly so that it can be translated into practical help for these vulnerable people as soon as possible,”  said Amparo Alonso Escobar, Head of Caritas Internationalis’ Delegation to the UN. The pledge leaves a funding gap of around $90 million in the UN’s target of $434 million for supporting refugees and host communities up until the end of February.

Caritas teams are on the ground supporting Rohingya refugees from Myanmar as they flee across the border into Bangladesh, where their situation is extremely fragile.

“This pledge of aid from the international community comes not a moment too soon,” said Caritas Internationalis Secretary General Michel Roy, as the number of Rohingya refugees who have arrived in Bangladesh since 25 August reached 603,000 (22 October, UN).

“Help is needed urgently for people at acute risk of disease outbreak, abuse and human trafficking. Caritas is deeply concerned that at least 35% of arriving families are headed by lone women, elderly people or children, making them exceptionally vulnerable in these overcrowded makeshift camps.”

Workers from Caritas Bangladesh and the diocese of Chittagong in the camps report the dangers faced by these unprotected families in the alarmingly overcrowded camps, especially for young women and children, with evidence of ongoing human trafficking into the sex trade and high risk of gender-based violence.

“Families where there are no men, or no parents, are living in the worst danger,” say the Caritas team. “Many women and children who came to receive food items were found to be in a sick condition. Children, old people, pregnant women and disabled people are entering Bangladesh with endless suffering.” 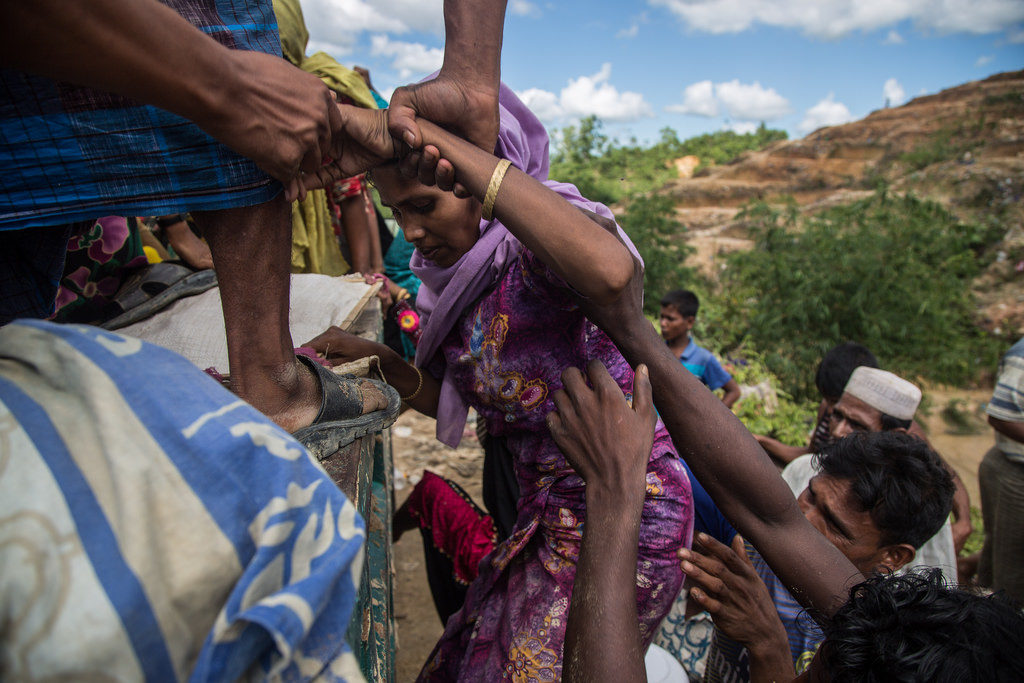 The situation is only worsening, as the mass exodus of traumatised people fleeing a military crackdown in Myanmar continues daily, reports Stefan Teplan of Caritas Germany from the Bangladesh/ Myanmar border in a place the locals call “Zero Point”.

“I could see miles and miles of refugees queuing. You can tell by their faces how exhausted they are from fleeing through the jungle for days, in some cases for weeks.”

Refugees told Stefan that they had been forced to hand over their last money or jewellery to unscrupulous people smugglers who are ferrying thousands by boat to the Bangladesh mainland. The Rohingya have been left with no choice but to leave, as one man said:

“Soldiers and authorities in Myanmar kept telling us over and over: ‘You’d better go to Bangladesh!’ They want to get rid of us. They burn down the houses of those who refuse to listen. I don’t think there will ever be a way to go back.”

The words of another newly-arrived refugee demonstrated how much she had already suffered: “I don’t care what will happen to me in Bangladesh now. It can’t get much worse. Maybe I’ll have to beg. The only thing that matters to me is that I don’t have to live in fear of my life any longer.”

“I scarcely wanted to stay alive” 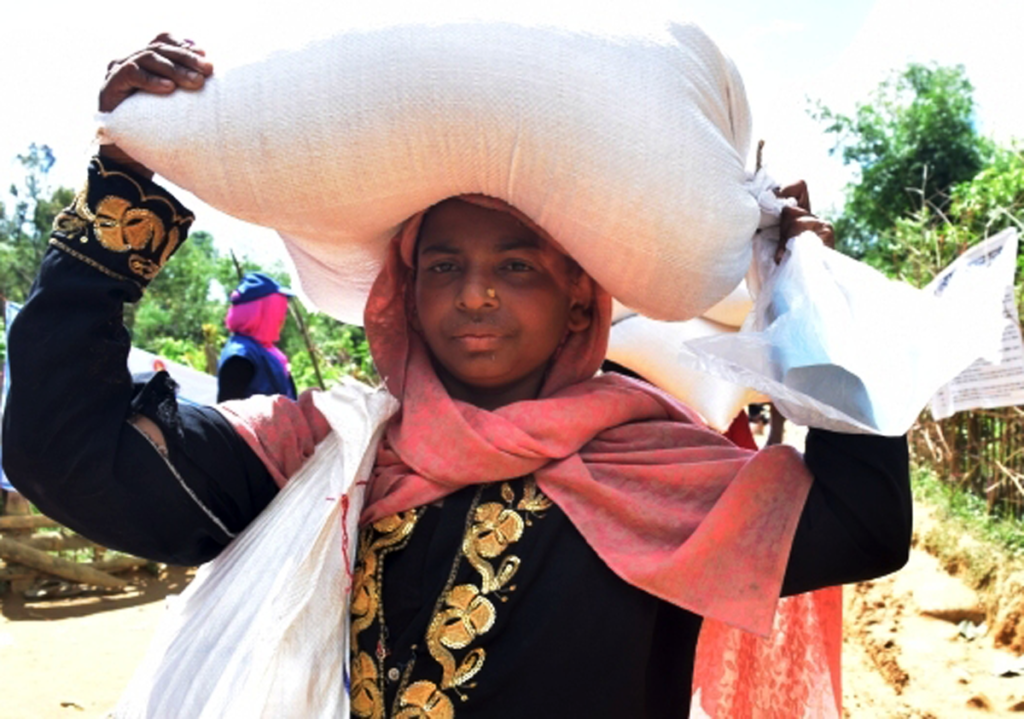 The Caritas Bangladesh team, who have so far distributed food and utensils to 70,000 people in the camps, sit on mats under muddy tarpaulins and listen to the stories of those who have risked so much to arrive here. Hasmat Ara, 30 years old, fled from a village called Tongbazar, guiding her children and her disabled husband through the jungle.

“We were hungry day after day except for water,” she recounts. “We got to the river after twelve days. The hilly roads, deep jungle, the rain – we had to endure everything, because there was nothing else we could do. I had a baby in my arms and, on the other hand, my husband with his disability. I scarcely wanted to stay alive… After we crossed the border, the hosting community lent a hand and tried to meet our hunger with what they could afford. I ate less and fed my children.”

Having received staple foods and utensils under the Caritas and WFP distribution, things are a little better for Hasmat. “Now I can cook myself and feed my children enough food.”

In addition to the ongoing food distribution, Caritas Bangladesh has conducted a thorough assessment of people’s needs together with CRS, and will work on child safety and education. Emergency projects are also being prepared for delivering badly-needed shelter, healthcare, water, sanitation and hygiene.