They are hunting us

Written by Harriet Paterson. Interviews and photos by Sam Phelps

Conflict in Cameroon has forced 160,000 people out of their homes into the bush and a further 26,000 to cross into Nigeria as they flee regions “stalked by fear and death”. Whether a person speaks English or French has become a reason to kill.

percent of refugees have only 3 days of food left 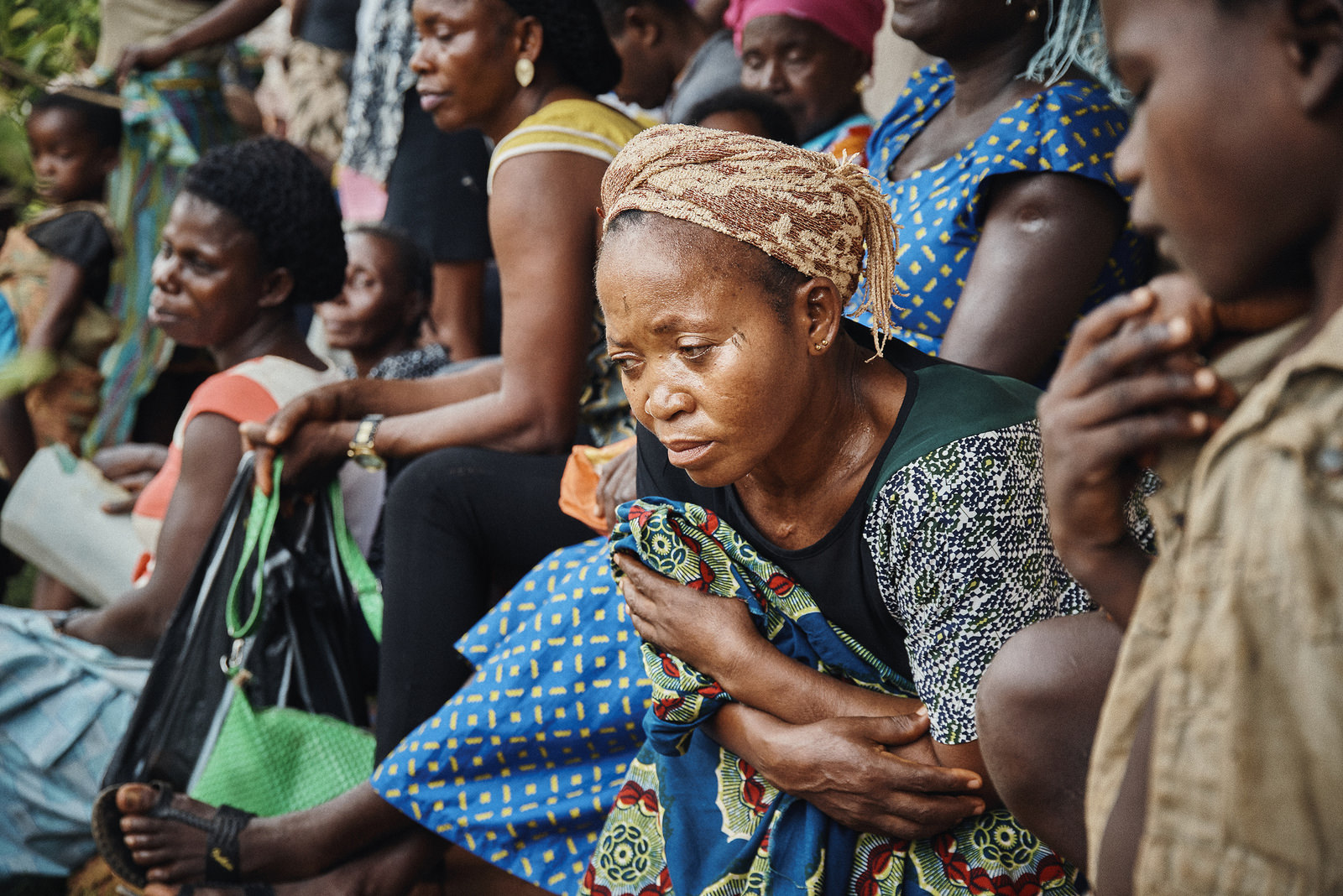 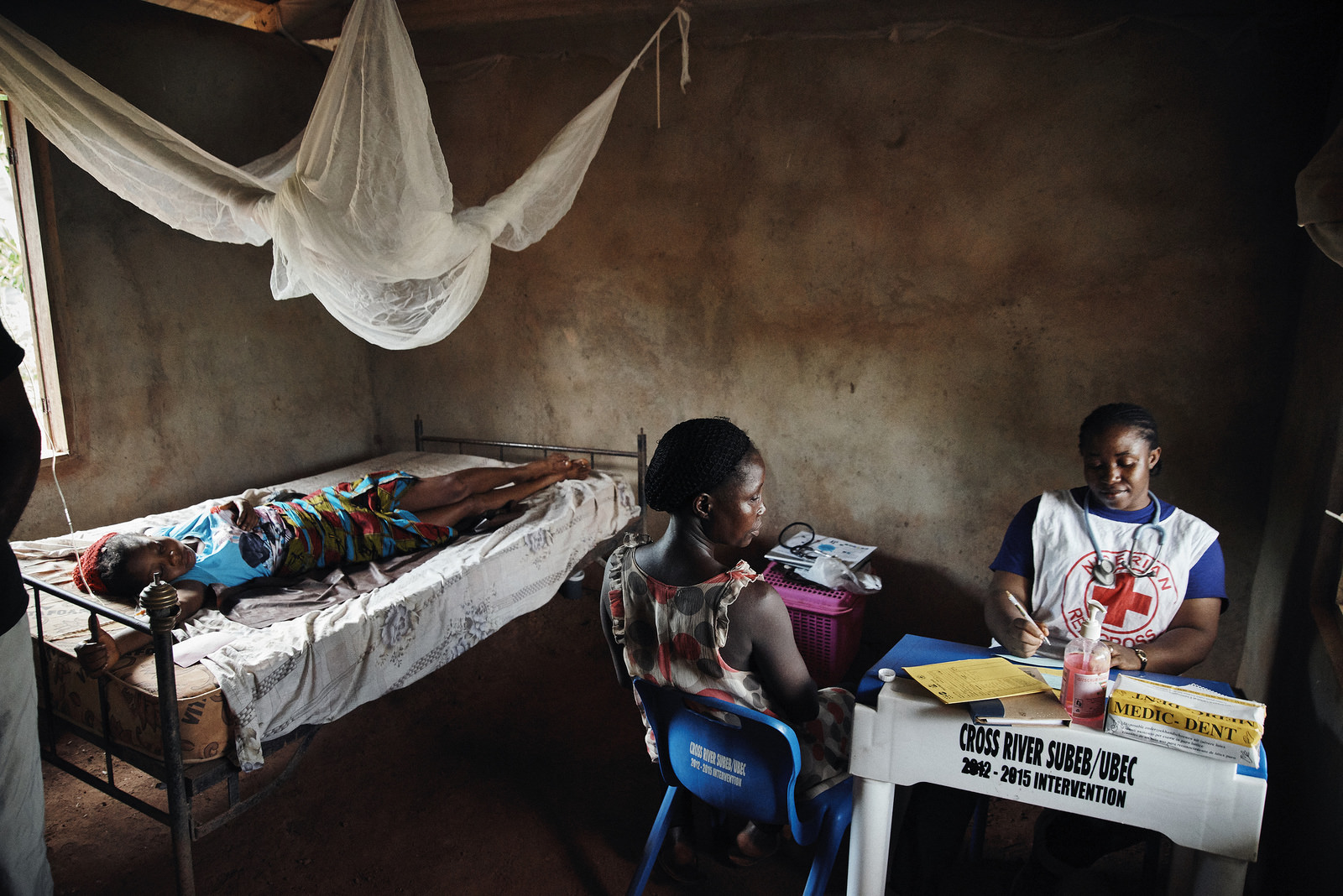 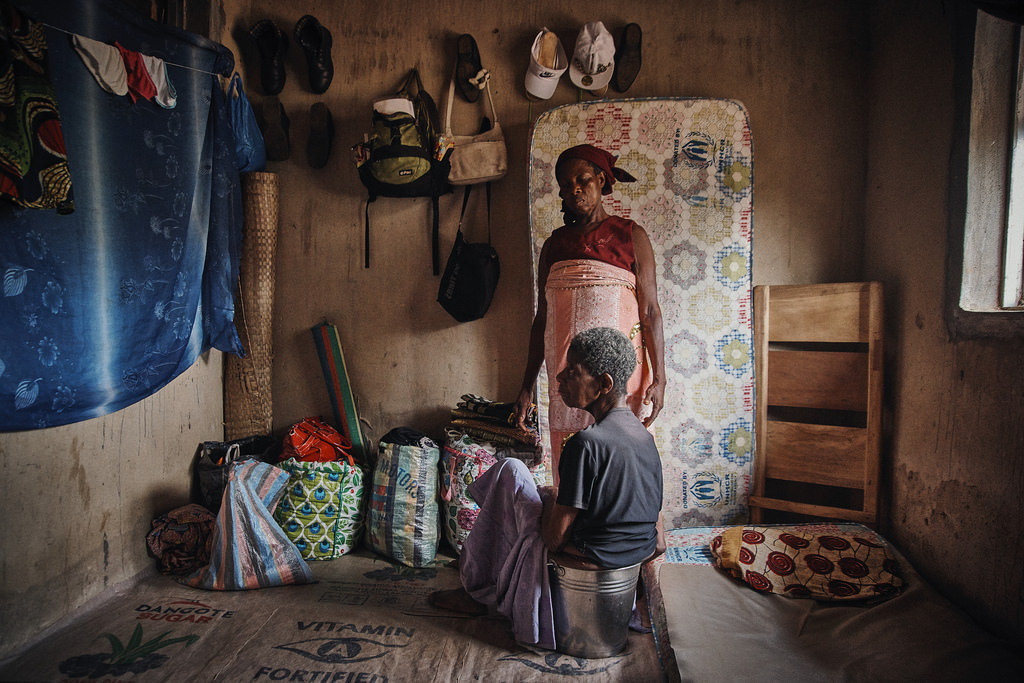 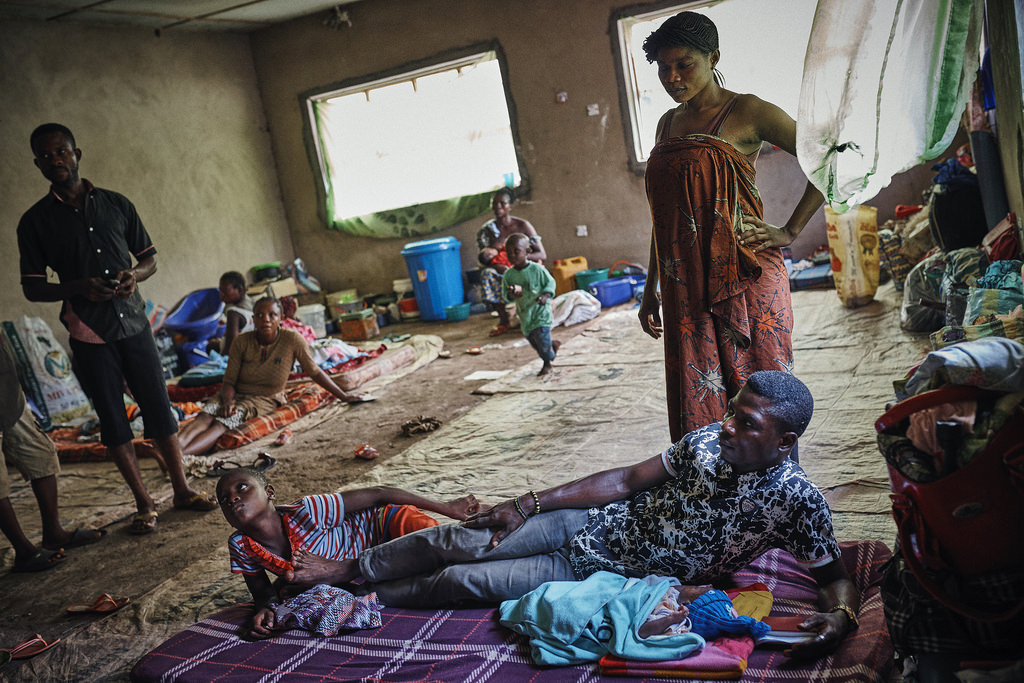 “During four days we sheltered in the forest”

“I carried Lucia on my back through the forest,” says David Ntui, standing next to his grown daughter. “She is disabled and can’t walk properly.”

He cradles Lucia’s baby, his grand-daughter, in the crook of his arm. The family ran from their home in Cameroon when the violence that has flared across the south-west and north-west of the country reached their village.

“During four days we sheltered in the forest,” David says. During those four days sleeping in the wild, David’s 8-year-old son Akingbe broke his arm. It is set in a wooden splint tied fast with a shoelace and a torn rag.

Once they crossed the border into Nigeria, locals in Mfamiyen village took the family in and shared what they have with them. But David feels bad for the host family. “I am a burden,” he worries. The country’s Catholic bishops warn that the poverty of local Nigerians is being compounded by the wave of new arrivals.

Caritas is mobilising its networks across Nigeria’s border states and within Cameroon to bring emergency relief in this escalating humanitarian crisis. A first response is planned, but more funds are urgently needed as the situation intensifies. 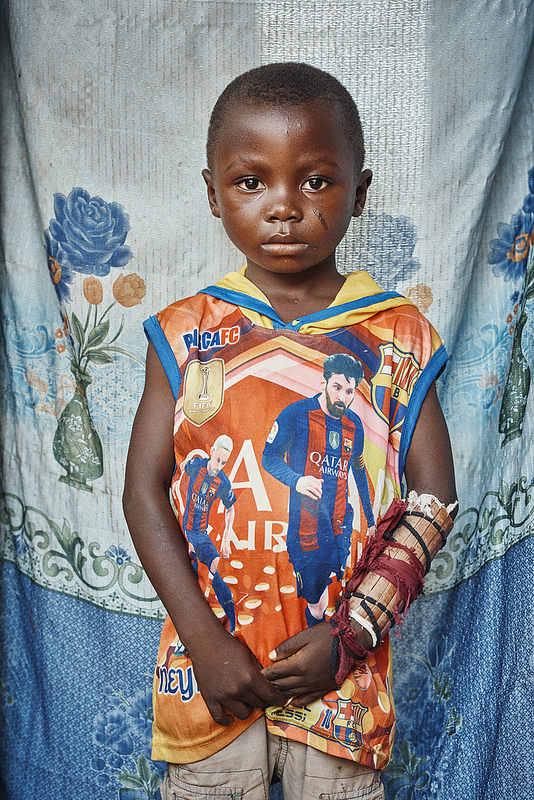 “I am already a dead man”

“Soldiers are burning villages,” says Moilgan, a 29-year-old farmer from Southern Cameroon who has found refuge in Nigeria’s Cross River State. “People are living in the bush. If you even walk up to the roadside you can be shot.”

New figures released by the UN report that 160,000 people have been displaced inside Cameroon in an under-reported emergency known as the Anglophone crisis. A further 25,624 refugees and asylum seekers have so far been recorded by Caritas Nigeria as the panicked population flee across the border from what Cameroon’s bishops describe as “blind, inhuman, monstrous violence”.

The displaced people and refugees are escaping violence caused by fighting between the government and an English-speaking independence movement in Cameroon, a country still riven between its former French and British territories. Running battles between soldiers and armed independence fighters have devastated communities, leaving behind ghost villages emptied of their inhabitants.

In October, activists in the English-speaking minority regions of Cameroon declared a “Republic of Ambazonia” in defiance of the French-dominated government. This followed demonstrations by lawyers and teachers protesting against the imposition of French in their courts and schools.

The government has replied with a crackdown. Anyone thought to sympathise with activists has been targeted by the army, according to eye-witness survivors arriving in Nigeria.

Moilgan pulls up his shirt to reveal a dark scar. He has been shot in the chest, the bullet narrowly missing his heart. His brother was arbitrarily arrested in November accused of terrorism and hasn’t been heard of since.

Some people turn away from the camera, fearing retribution against their families by the Cameroon military, but Moilgan looks straight into the lens. “You can take my photo,” he says. “I am already a dead man.”

“Not a week goes by without houses being burned down, people kidnapped or killed…Fear has taken over this territory.” – Hippolyte Sando of Caritas Cameroon after visiting the badly-affected diocese of Mamfé in south-west Cameroon. 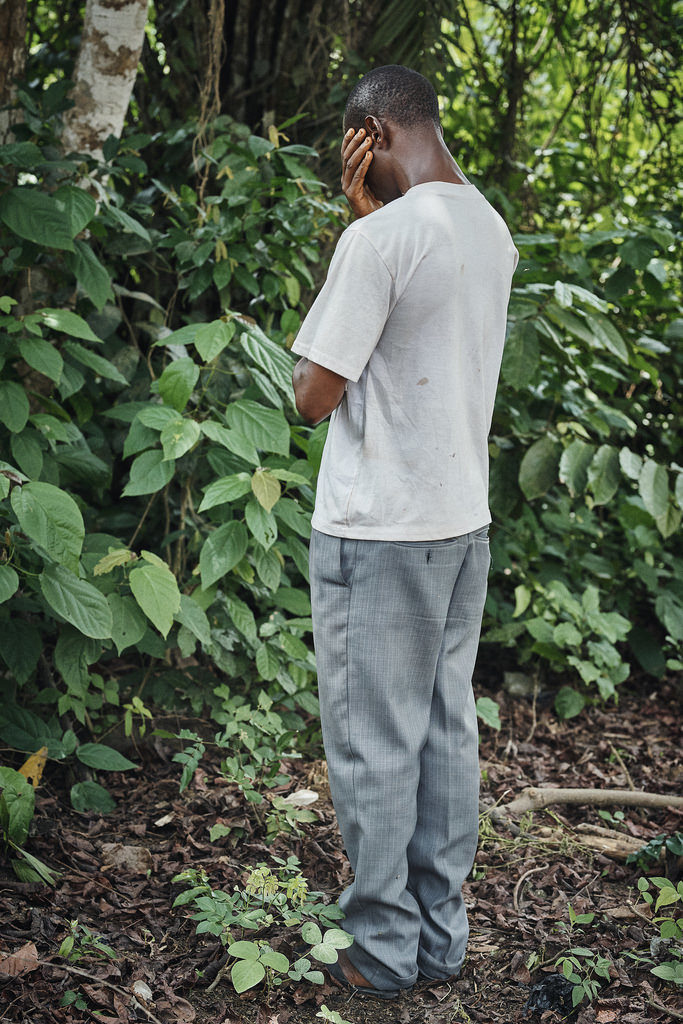 “More deaths and kidnappings in the last few days. A priest, the head teacher of a school, has just been kidnapped. The secessionists are gaining ground, they too are violent and killing people – at least thirty.”

Fr. Emmanuel Bekomson, Director of Caritas Calabar in Nigeria, confirms that the conflict situation is being “seriously aggravated” by exchange of fire spreading to more parts of south-west Cameroon: “Stories told by recently arrived refugees in Cross River, Nigeria, show that throughout last week there was constant shooting in Mamfé, Limbé, Buea, and Nsan Aragati,” he reports.

Fear has followed people into Nigeria. “They are hunting us,” says a secondary school teacher who has spoken out for the Anglophone movement and does not wish to be named. “Cameroonians, especially young men have been arrested by Nigerian security forces,” he explains. “So we are scared.”

Small wonder so many refugees are reporting feelings of anxiety and fear, with poor sleep and flashbacks.

The women of southern Cameroon are arriving on foot in Nigeria bereaved and destitute, bringing children with them, leaving their dead behind. Four fifths of the refugees are women and children.

Now they are dependent on the care of the communities where they have dropped, exhausted and traumatised, knowing their homes will be ransacked by soldiers, their precious crops and livestock lost. 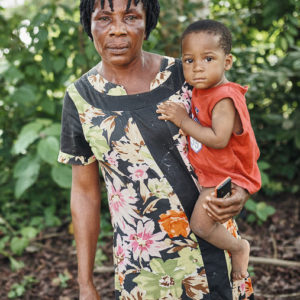 “My two brothers were shot.”

Conflict turned Rose into a mother for Excellent Ogar, 10 months old, when the baby’s father was killed. “In February my two brothers went to the bush for food and were shot by the Cameroonian army,” says Rose.

“Their bodies were dumped near the village of Danare in Nigeria. We were crying when we heard the news.” Rose has been taking care of her orphaned nephew ever since. 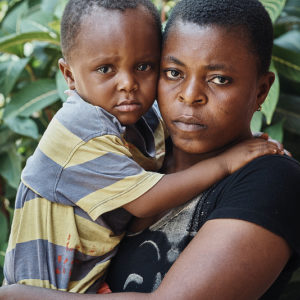 “Truly we are suffering.”

Patience has found refuge in the same Nigerian community as Rose, in Cross River State. When her husband was shot dead, she grabbed her 2-year-old son Chris Ojua and ran for her life, as government forces tore through her village, hunting activists. She brought nothing with her – no food to eat, not a mat to sleep on.

“Most of them fled for their lives with only the clothes they had on,” says National Director of Caritas Nigeria, Father Evaristus Bassey. 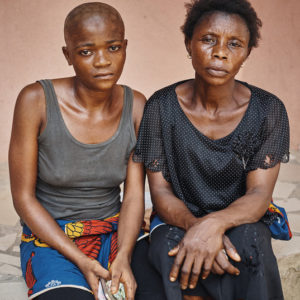 “He didn't come back”

Patricia, her son and daughter-in-law Margaret fled across the border to Boki, Nigeria with their three children. Once there, however, they had no food.

“Four days ago my son Victor Iban, 27 years old, went to harvest our fields on the Cameroonian side. He was shot by the Cameroonian soldiers. We waited two days and heard from villagers that he had been killed. His body is still in the bush.”

Margaret’s head is shaved in mourning for the death of her husband.

When the refugees reach Nigeria after their long and dangerous walk, life is tough. Although some have family to shelter them, most are down to one meal per day or go hungry altogether to save food for their children.

Only five in 100 have proper shelter, the rest sleeping rough in abandoned buildings, crowding into rooms with a dozen others, or sleeping in the open. Caritas found 270 refugees living in one building. People are drinking from open streams and ponds.

Visiting parishioners from his diocese of Mamfe in Cameroon, Bishop Andrew Nkea described their living conditions as “appalling” and said they were scattered “like people without a homeland”.

The arrival of so many in Nigeria’s states of Cross River, Taraba, Benue and Akwa-Ibom states is exerting severe pressure on already poor households.

Valentine Itomin, a cassava farmer living in Oban village in Nigeria’s Cross River State, has taken in 20 members of his extended family from Cameroon. “They have come to me, so I have a responsibility to shelter and feed them,” says Valentine simply. He has four children of his own to look after, and his income as a subsistence farmer cannot possibly feed so many mouths. 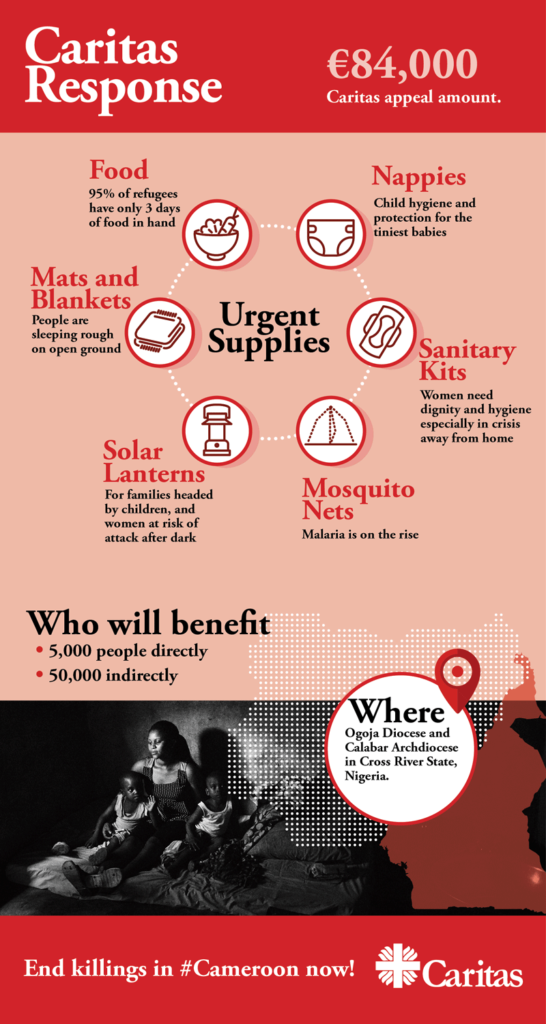 On the Nigerian side, the local Caritas is working urgently to scale up its support. “Caritas has been working in protection with orphans and vulnerable children, household economic strengthening and micro-finance programs,” explains William Itorok Effiom of Caritas Calabar, who works at the epicentre of refugee arrivals.

Caritas Nigeria plans to reach 5,000 people over the next two months with the funds it has raised so far, but could do much more if financing could be found for the €250,000 project originally envisaged. An appeal has been launched.

Caritas will work with UNHCR to provide protection and relief, particularly for people who are most at risk. The UN estimates that 20 to 30 per cent of the asylum seekers and refugees have some kind of vulnerability, such as a physical disability.

Host families need support as well as refugees. Caritas is holding meetings with local communities and refugees together, so they have shared ownership of the emergency plans.

In the diocese of Mamfé in south-west Cameroon, 45,000 people have been hit by the crisis, the majority displaced from their homes and farms and living in the bush. Bishop Andrew Nkea has negotiated with security forces to allow people access to their farms and a few brave souls are venturing back.

“Since the beginning of this crisis there has been no intervention by international organisations,” writes Hippolyte Sando of Caritas Cameroon. “Only Caritas has, with difficulty, been able to access these areas stalked by death and fear.”

Caritas in Mamfé is doing all it can with limited resources to support this scattered and panicked population, aiming to reach at least 3,500 displaced people with these basic needs: 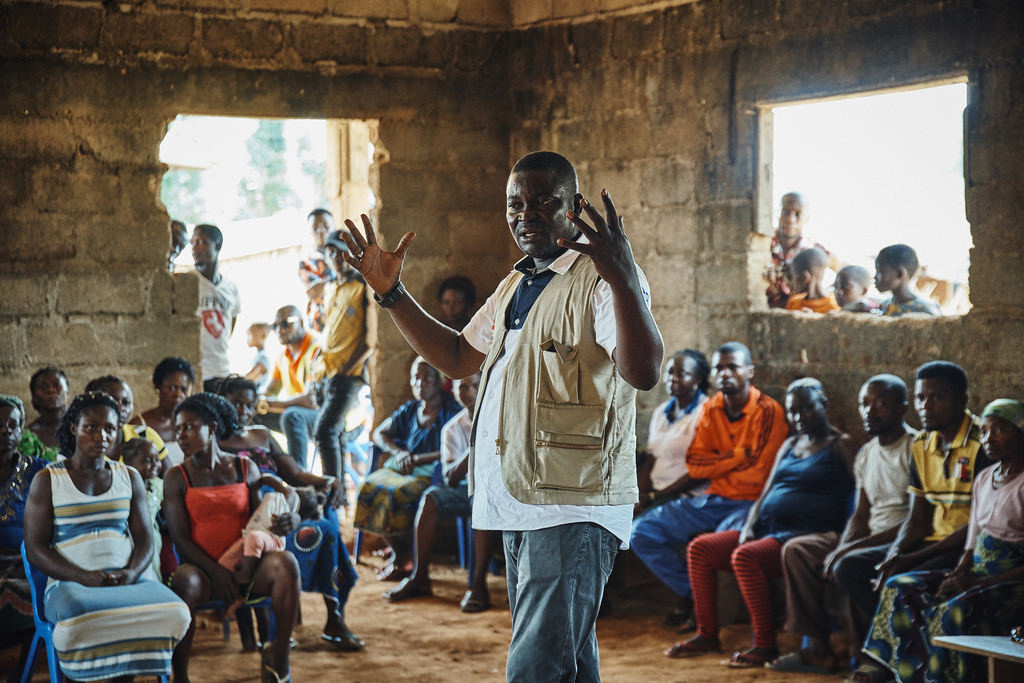 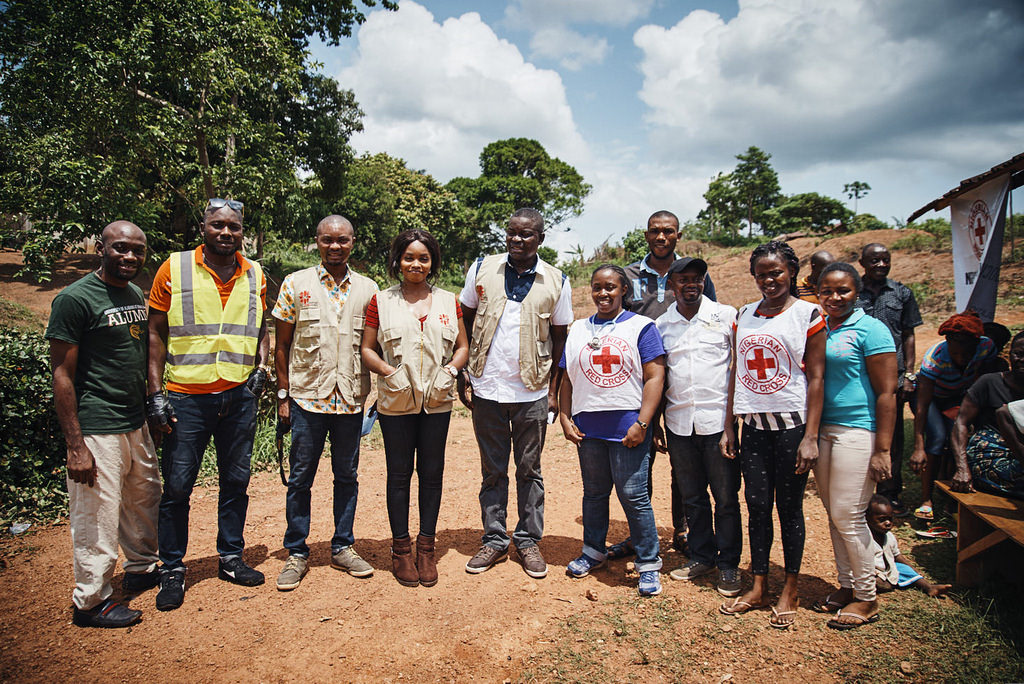 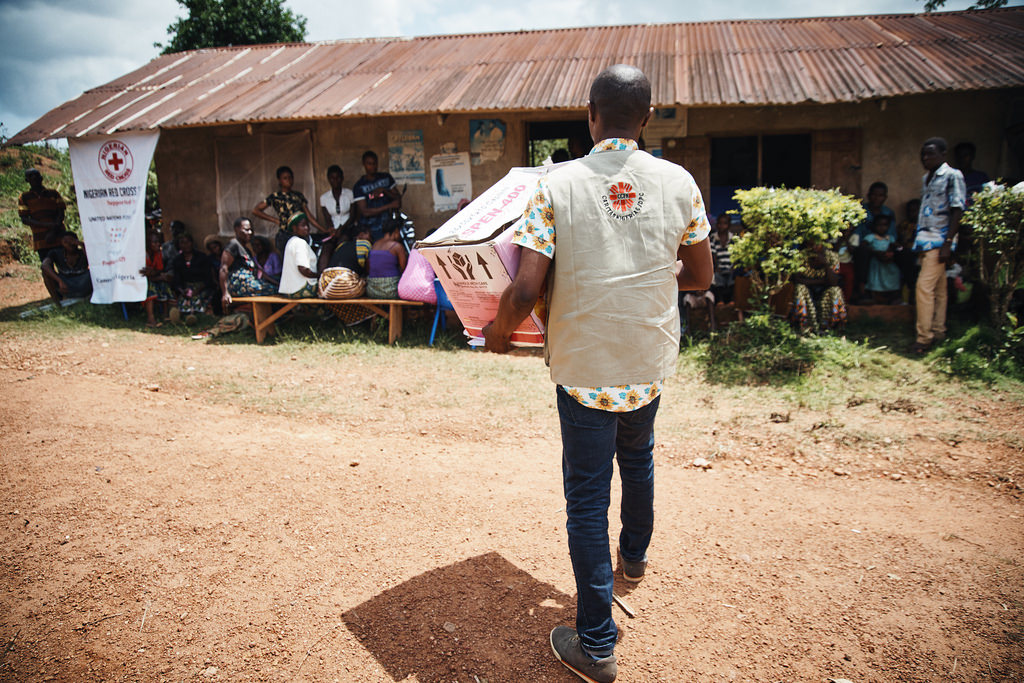 The Catholic Church in Nigeria has called on all people of goodwill to help the refugees, not only with practical necessities but also with compassion. As Nigeria’s bishops declared in a statement: “To overcome their traumatic experiences, they need tolerance and a welcoming atmosphere.”

A “Cry of distress” issued by Cameroon’s bishops on 16 May says the time has come for mediation to be imposed. “Let us save our country, Cameroon, from a baseless  and futile civil war,” they write. “Let us stop all forms of violence and cease killing each other, we are all brothers and sisters, let us resume the way of dialogue, reconciliation, justice and peace.”

There are hopes that the Church, one of Cameroon’s strongest institutions, could act as a peace broker in conjunction with other Christian denominations.

Fr. Emmanuel Bekomson, Director of Caritas/JDPC in Calabar, expresses his hope that “the Church can achieve something through advocacy with the United Nations to urge President Biya to organise a plebiscite and to support the increasing number of refugees arriving in Cross River and Benue States.

Currently, however, the crisis intensifies. “Conditions are getting worse every day,” writes Hippolyte Sando from Caritas Cameroon. “In these conditions, going back home would be suicide. The situation remains tense, and gives no sign of better days ahead.”