Caritas is extremely concerned and actively responding to the latest Ebola outbreak in the Democratic Republic of Congo amid fears that it could escalate into an epidemic.

Government officials confirmed the outbreak on 8 May and have since indicated that the disease in the central African country is now in a “new phase” after cases of the deadly virus were identified in the city of Mbandaka in the Bikoro region.

The country’s ministry of health has announced there are a growing number of suspected cases and confirmed deaths. The deaths occurred in Bikoro, which is about 150km from Mbandaka. 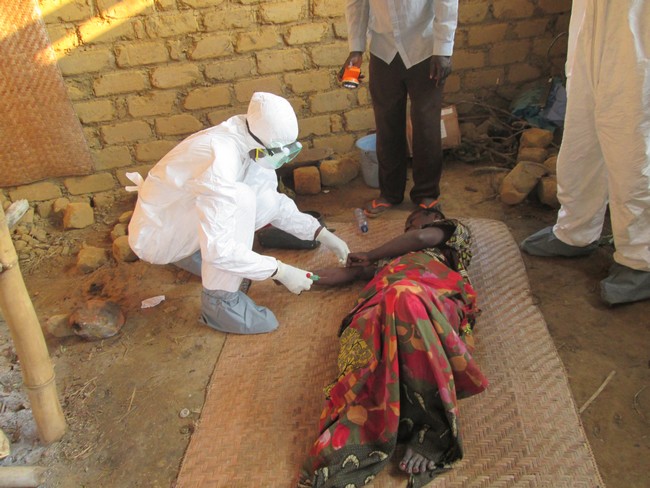 Caritas Mbandaka-Bikoro says dozens of people have reported symptoms of fever, abdominal pain, diarrhea and haemorrage since early April but the size and scope of the epidemic is not yet fully understood.

The first urban case significantly raises the risk of an epidemic and Caritas has joined the Congolese government, the UN World Health Organisation and other agencies in a joint mobilisation to respond to the emergency.

Caritas is preparing for any escalation of the disease and will work strenuously with other agencies to stop it from spreading to other countries.

A delegation of Caritas Congo led by Dr. Rose Mukunu went 16 May to Mbandaka along with the Diocesan Office of Medical Surgery (BDOM) of Mbandaka-Bikoro.

“The situation is worrying because it’s urban unlike earlier ones,” said Dr Rose Mkunu. “We do not have much control as yet over preventing contact with patients and that’s what is dangerous. Caritas is doing everything it can to raise awareness and brief community and religious leaders on the disease as well as means for protection and surveillance but we are limited by our means.”

This latest Ebola outbreak is the ninth that has occurred in the Congo. But significantly it is the first time the Ebola virus has been reported in this health zone.

The very first Ebola outbreak – the actual discovery of the virus – in the Congo was declared in 1976. According to figures compiled by the European Commission there have been 1,056 reported cases and 756 people have died since it was first identified in Congo.

There are real concerns that the new Ebola outbreak in the Congo carries a potential risk of broader contamination because the epicenter of the epidemic, Bikoro, is on the shores of Lake Tumba with direct access to the Congo river that connects directly to Kinshasa – with an estimated population of 12 million people – as well as Brazzaville and Bangui.

Mbandaka has a population of more than a million people and is close to the epicentre. There are fears that the disease could be transmitted by travellers from a remote location to an urban centre.

Three health workers are amongst the reported cases – one of whom has already died – and there are concerns that medical practitioners may have been in close contact with patients and could  transmit the disease.

Caritas is committed to raising awareness and community mobilization in Mbandaka and other locations. Caritas staff are being briefed and important information will also be given to priests and church congregations. Caritas has already planned to provide food to 1500 households as well as health support.

“We plan to focus our efforts on prevention, water, hygiene and sanitation, community mobilization and communication,” Caritas said in a statement. “For this, we are counting on the involvement of priests, men and women religious, teachers and nursing staff working in the affected areas.”