Share the journey meal with refugees in Syria: challenges and rewards

Caritas Internationalis recently invited us to organise an “encounter meal” in a community with migrants and/or refugees. It would be part of the Share the Journey campaign which was launched by Pope Francis in 2017 and is focused on providing spaces and opportunities to bring migrants/refugees and communities closer together.

No family has escaped the pain of the war that’s been raging in Syria for 8 years. Millions have become refugees in other countries and millions have fled their homes within Syria. In such a situation, who would be the host and who would be considered refugees for a shared meal?

Despite some reservations, we organised a meal. We wanted to be part of the Global Week of Action when many other Caritas organisations around the world were organising encounter meals with migrants and refugees. 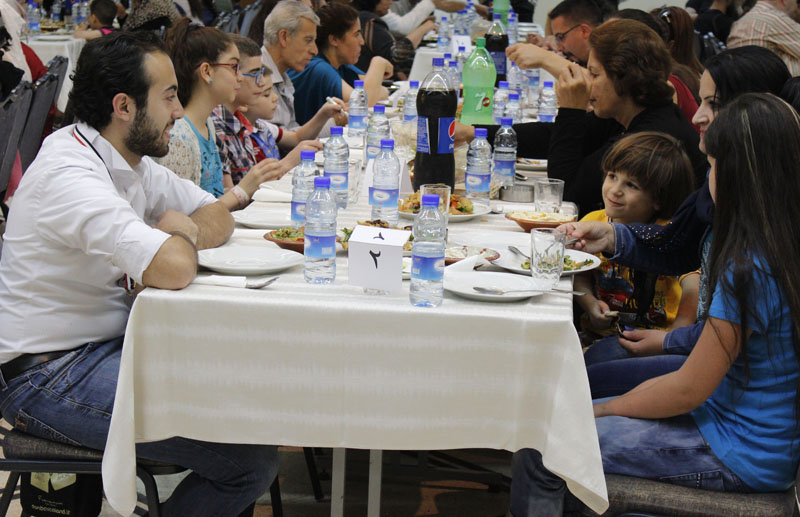 Bringing people together in a divided country

We had some worries about this gathering though. How would Catholic bishops react when we invited them to an Orthodox Church to eat? Would the people invited get on with each other? We’d invited a mixture of Syrian society, Muslims, Christians, Alawite, Druze…

Syria is divided now, the east and the west, the city and the countryside, the ones who left the country and those who stayed behind. Everyone is aching, and people’s hearts are filled with hatred and pain.

Despite our concerns, we seated families from different religions together on the same table. It was a risky decision, but we couldn’t do it any other way. Caritas serves all people without discrimination of religion or sect, and we felt it was not Caritas to separate people according to religion.

Sharing personal stories from the war in Syria

Our fears seemed to come true when the families started to arrive at the church hall. Everyone was tense. An elderly lady approached one of our workers and asked her not to put her with Muslims on the same table as they were the ones who kidnapped her son.

I sat next to this woman. When I spoke to her I discovered that she was displaced from Homs. Five years earlier, armed groups had beat her eldest son about the head until he lost consciousness. Her son is now suffering mental problems due to that incident. Her second son was shot ten times in the leg, causing him permanent disability. The third son was kidnapped with his wife and one-year-old son, and since then, she hasn’t heard from them.

“I would have preferred them to have taken my eye, my kidney, or even my heart, rather than taking my son away,” she told me while crying.

Everyone has his own pain 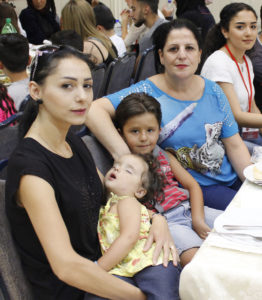 I put my hand on her arm and tried to console her injured heart with some care. When she calmed down a little bit, I told her every family in the room had suffered a lot. I indicated another lady on our table. She lost her husband who was killed with a mortar shell few years ago, and her son lost his legs. She is now taking care of four children – one of which is disabled – by herself, without any source of income.

The old lady looked at the widowed mother, her eyes were full of compassion, and she said, “Yes, everyone has suffered enough during this war, and everyone has his own pain.”

The lady beside me started to relax and enjoy her meal. Other diners started to shared their stories. A young man told everyone how he was kidnapped by armed groups and tortured for two years. He asked people to pray for his brother who was kidnapped with him and who is still missing. After this, many of those eating started to share their sad stories with the others.

Christians and Muslims praying together for peace

At the end of this meal, Christians and Muslims prayed together and asked God for peace, forgiveness and love to fill all hearts in Syria.

Those who came to the meal have told us we not only fed hungry people with a rich meal, but we were also able to touch their hearts deeply, and to help them start forgiving and connecting with others.

For Caritas Syria, the shared meal was part of a process of reconciliation.  We hope this event is the first step for Caritas Syria to play a role in rebuilding the destroyed bridges between Syrians and to build a real peace that comes from the bottom of everyone’s hearts and spreads across our whole country. In this sense we will Share the Journey together.

Find out more about the Share the Journey campaign.