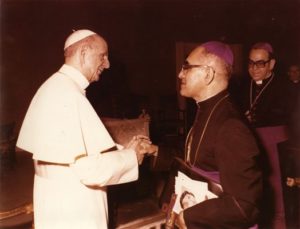 Their canonisations will be celebrated by Pope Francis in St. Peter’s Square during the Synod of Bishops on Youth. Young people from around the world will be in Rome to celebrate the sainthood of the pope, who inspired the creation of Caritas Internationalis and the Italian Caritas, and Romero, the bishop of the poor and co-patron of Caritas.

To mark the sainthood of these witnesses to faith and charity, Caritas Internationalis, Caritas Italiana and Caritas of Rome will hold a special event at the Marist Fathers’ San Leone Magno Institute in Piazza Santa Costanza in Rome on 13 October.

Cardinal Luis Antonio Tagle, the president of Caritas Internationalis, will concelebrate mass in the institute’s chapel at 4 pm. At 6.30 pm young artists and migrants from different countries will take part in the concert , “The sound of your voice”, to be held in the institute’s auditorium as part of Caritas “Share the Journey” campaign.

“For peace is not simply the absence of warfare, based on a precarious balance of power; it is fashioned by efforts directed day after day toward the establishment of the ordered universe willed by God, with a more perfect form of justice among men.” Pope Paul VI

Pilgrims from every continent flocked to Rome in 1950, declared a Holy Year by Pope Pius XII. The year was marked by five great exhibitions that were to demonstrate to visitors from all over the world the work of the Church. One of them was on the activities of Caritas organistions in helping people caught in conflict. The Caritas exhibit was opened by Mgr. Giovanni Battista Montini, Substitute Secretary of State. 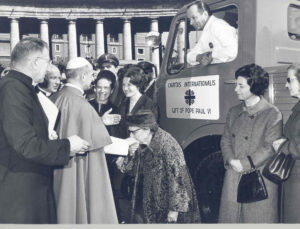 This was before the Caritas confederation was formed. The Vatican had long wished to see closer international cooperation among as many Catholic charities as possible. In 1951, a meeting of the leading Caritas associations was initiated, again, by Mgr. Montini. At the start of the convention, Montini proposed the creation of an “international organism” for managing cooperation between individual Caritas’s. His address would form the basis of a new set of statutes for a new organisation that would go on to become “Caritas Internationalis”.

Mgr. Montini would go on to become Pope Paul VI, author of landmark Church teachings Populorum Progressio and Evangelii Nuntiandi and our founding father. “For us, Paul VI was the great light,” said Pope Francis.

Oscar Romero: Saint of the Americas

“Let my blood be a seed of freedom.” Oscar Romero

Oscar Romero was the Archbishop of San Salvador from 1977 until he was assassinated in 1980. He became increasingly outspoken about human rights violations in El Salvador – particularly after the murder of his close friend Father Rutilio Grande in March 1977. 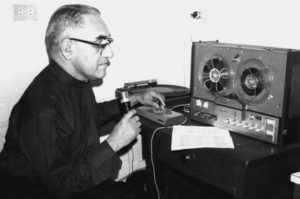 During his three years as archbishop, Romero repeatedly denounced violence and spoke out on behalf of the victims of the civil war. In a time of heavy press censorship, his weekly radio broadcasts which were supported by Caritas organisations were often the only way people could find out the truth about the atrocities that were happening in their country. Caritas organisations helped rebuild the station when it was blown up.

On the day before his assassination, he urged soldiers and police not to follow orders to kill civilians, and stop the repression. “The peasants you kill are your own brothers and sisters,” he preached. “When you hear a man telling you to kill, remember God’s words, ‘Thou shalt not kill’. In the name of God, and in the name of this suffering people, whose laments rise to heaven each day more tumultuous, I beg you, I beseech you, I order you in the name of God: Stop the repression!”

Archbishop Romero was shot dead on 24 March 1980, aged 62, while celebrating Mass. In the ensuing decade, some 70,000 Salvadorans were killed in the civil war.

Romero is an inspirational figure to hundreds of millions of Catholics around the world. He didn’t simply talk about the need to love your neighbour, but courageously named the injustices that plagued his country. He reminded us that Christ is found in people living in poverty, and that we cannot ignore the suffering of our brothers and sisters in need.