“Our house is gone, it is destroyed. Our clothes are gone, everything is gone,” says Rita Farriya, one of 600,000 people across Mozambique affected by the devastating Cyclone Idai that hit on 15 March.

Rita, a mother of two, was one of those whose house survived the storm but was bulldozed by flooding the following day as rising waters destroyed everything in their path. 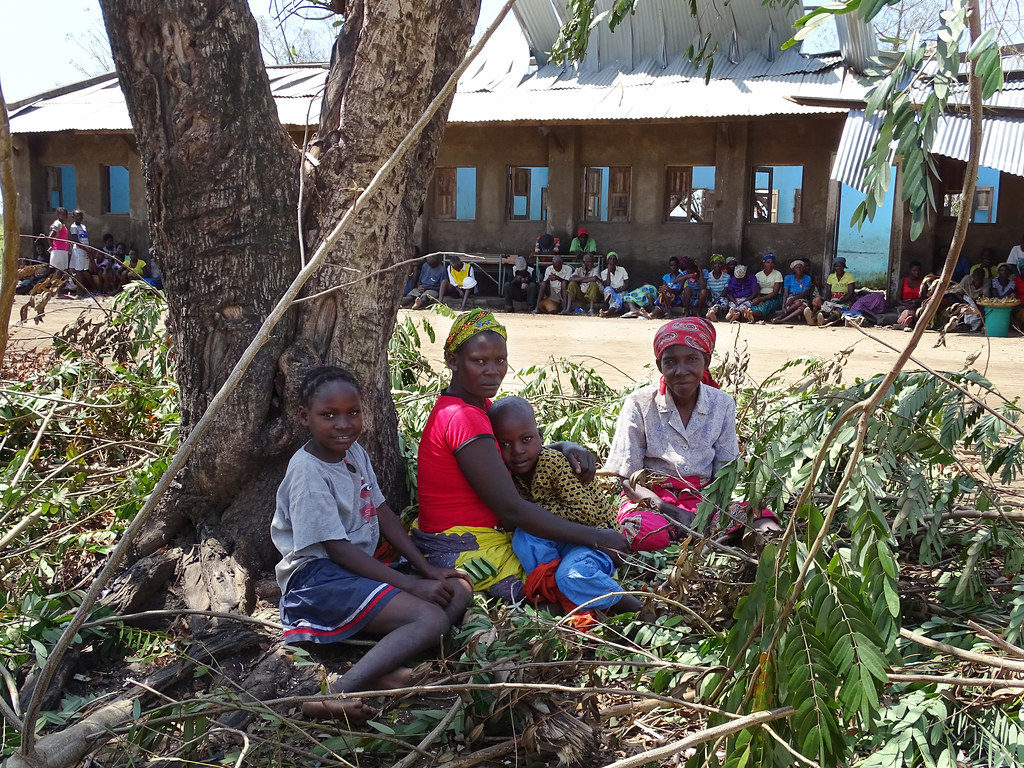 Rita Farriya (center) rests with her son, Ivo Mateus, 5, daughter Antonia (left), 11, and her neighbor, Catarina Marques (right) under the shade of a tree at Muda-Mufo School in Nhamatanda district in Mozambique. Photo by Caroline Brennan/Caritas

“The rain was so heavy that we had to just carry our clothes and everything…Water just filled our houses. Our homes are now like rivers.” – Rita Farriya

Some 843 people were killed by the storm and subsequent flooding across flat rural areas in Mozambique, Zimbabwe and Malawi. Hundreds of thousands of people throughout all three countries are displaced and in need of food, water and shelter. Caritas Mozambique and its global partners are providing support to affected families.

Rita is among thousands of people who sought refuge at the destroyed Muda-Mufo primary school in Nhamatanda district, a refuge where Caritas is helping in one of the country’s most isolated areas.

“On the day of the floods, we came here,” she said. “There’s nothing to eat, nowhere to sleep. It is sad here.”

For those like her who are staying at the school with her children, finding food is the chief concern.

Volunteers from Caritas have been distributing food kits, including oil, sugar, rice, beans, salt, and soap.

How you can help with cyclone Idai emergency

DONATE TO OUR EMERGENCY FUND

In Beira, Caritas continued distributing food aid to 1,640 families. In Chimoio, the team has set up a model shelter using the 500 tarps.

But the needs of those affected by the cyclone area great. Among those who have sought shelter at the school is Antonio Fernando, 30, a farm worker.

“The cyclone caused destruction and damage to homes, but the floods, on the other hand, caused a lot of deaths,” he said. “This is because people were not able to cross safely from one place to another place. They may have had warning about the cyclone, but not about the flood. This is what caught us by surprise.”

Antonio, a father of three who sought refuge with his wife, sister and mother at the school, says that his house and his life savings were destroyed in the floods.

“I feel very bad because I have no help. It is difficult now. I’m with my family, but we have no food,” he adds.

Crops have been washed away or inundated, destroying people’s livelihoods and people are hungry, eating only one meal a day. People can even be seen trying to sell spoiled corn in the market.

“It’s harvest season, but all of the maize is spoiled or under water,” says Antonio. “The main need here is food.”

For those whose worlds revolve around the school during normal times, much is at stake. Veronica Mavundo, 38, teaches 3rd grade classes, but her classroom is destroyed. She came to the school soon after the floods so she could see it with her own eyes.

“Someone told us about the school—that it was destroyed—and I felt horrible,” she says. “When I got here, it was worse than I feared: there was so much water. The classrooms were filled with water. It was overwhelming. Even all of our teacher residences have been destroyed.”

The teachers have repaired the main roof, but there is much to do before the school can function again. And, it remains a place of refuge for those who have no homes to return to.

“We will start teaching outside until the roofs of the other buildings are complete,” she says. “It’s difficult to teach outside. We won’t have our blackboards, our maps, our clipboards. But, it is a new experience we have to face.”

And, like the thousands filling the school grounds now, the healing, grieving and recovery from the country’s worst disaster in nearly 20 years is also a new experience they must face.

Padre Silvio Anovo of the Paroqula do Sagrado Coracao de Jesus witnessed the total destruction of his church, the largest in Beira. “When the cyclone arrived, we were all here – myself and another priest and our guard,” he says. “We moved under the stairwell and crouched down [as the storm grew heavier].”

“We could see the roof [of the parish] flying off piece by piece,” he adds. “We can’t describe which one happened first — the roof or the wall of the church. We just heard a loud boom. The first thing I thought was that we will not escape this. Naturally, we were praying– not only for us, but for the community.” 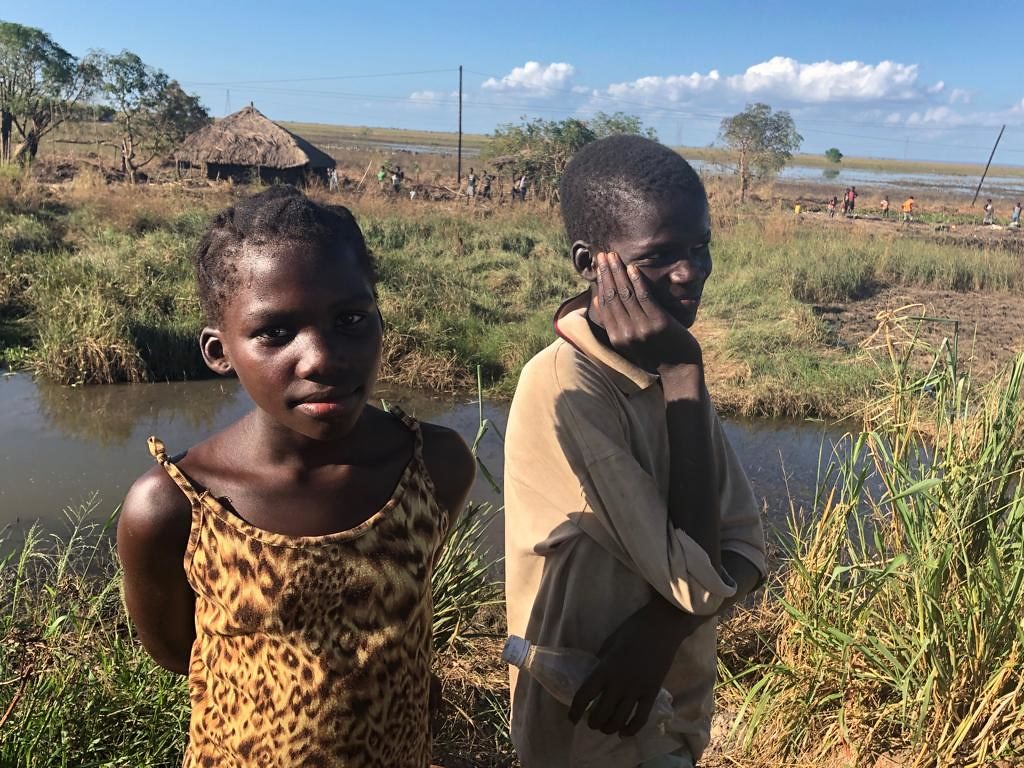 Caritas distributes tarps to extremely vulnerable families in Tica whose homes were totally devastated, washed away or severely damaged in Cycline Idai and the resulting floods. Photo by Caroline Brennan/Caritas

The Bishop of Beira, Claudio dalla Zuanna, says the church is determined to carry on to help his parish rebuild.

“We can’t only cry about the Church [in Beira] that fell; but we have to look ahead,” he says, adding that the remote area, which is impoverished and cut off from development, must be helped so that it is better off than before the cyclone hit.

“In this devastation, we must look at how to rebuild in this area,” he says. “Providing seeds, helping people to replant. Drilling wells for access to clean water close to home. Building schools, or markets. Or improving access to these rural areas – in this way we can [help communities] to improve their lives.”

But now the future is uncertain. “For the future, I have no idea,” says Antonio, the farm worker sheltering with his family at the school. “The people are in a really bad state here. It is crowded here and we have nothing. We are looking for aid, especially food. Please don’t forget about us.”

5/04/2019 Africa, Conflicts and Disasters, Emergencies, Malawi, Mozambique, Zimbabwe by Caritas Internationalis
Prev
Next
This website uses cookies to improve your experience. We'll assume you're ok with this, but you can opt-out if you wish.Accept Read More
Privacy & Cookies Policy
Necessary Always Enabled
Non-necessary