The Rohingya people have once again faced a life or death situation, in the form of the devastating fire that recently hit the world’s largest refugee camp where they are living in Bangladesh.

The fire destroyed the homes and possessions of tens of thousands of incredibly vulnerable people.  It also destroyed their documents and the identity card they need to access aid and social services.

But beyond the losses to the Rohingya, the fire also affected the nearby local community and damaged their homes and possessions. So much had been done over the previous two years to build up relations between the Rohingya and the local community next to the camp, but now their relationship has returned to how it was in the beginning and has deteriorated to the point of conflict, leaving a big question mark over the future.

The fire and its impact on those in the camp and around it is an alarm call for the international community to think about the long-term future of the Rohingya. It brings to the forefront the need to make plans and build an improved settlement where the Rohingya can live safely and in peace and not fear for their lives.

The Rohingya may have escaped persecution by fleeing over the border following a brutal military crackdown that began in August 2017 in Myanmar’s Rakhine State, but for the 1.1 million people in the camps at Cox’s Bazar in Bangladesh, safety is still a massive challenge.

The Rohingya people have suffered so much trauma already, they need to be protected to be able to move forward with their lives. The trauma of their original persecution and flight out of Myanmar has been reignited by this latest life-threatening disaster.

Many people are traumatised as their precarious living conditions have been made even more precarious, but children and women are particularly affected by this. According to the conservative culture of the Rohingyas, all women have to stay inside the house most of the day. This in itself is very difficult considering how hot it can get in Bangladesh, but also, when you’re in the camp, it’s easy to see how this impacts women. 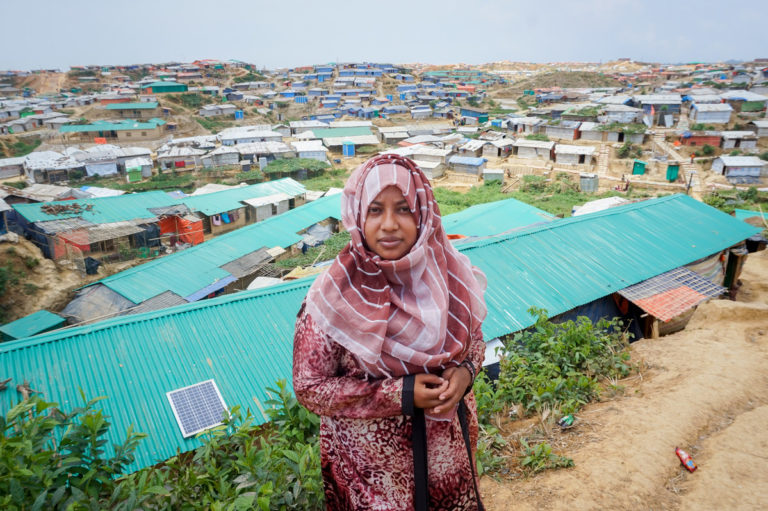 Caritas offers multipurpose women, child and adolescent-friendly spaces and community-based protection programmes in Rohingya camps – as well as many other forms of support. Going to the Rohingya camp, you realise how the help and friendship you offer, which doesn’t seem like enough to you, is very valuable and meaningful to those who are suffering.

The image of children and women returning to a normal life following 2017’s crackdown brings a sense of peace to the Rohingya, but if they start to feel helpless and vulnerable, it will make them think again about the devastation of the fire and their persecution in Myanmar.

As Bangladesh has been experiencing strict lockdowns and restrictions to stop the spread of the COVID-19 pandemic, the possibilities for providing those who are suffering with ongoing emotional support is limited.

Beyond the emotional impact, some of the issues still at stake following the fire are very practical. For example, providing an adequate shelter for all those who lost their homes, a shelter that’s strong enough to withstand the upcoming monsoon season, is urgent.

Water and hygiene are also essential. Family-based toilets are not guaranteed in all Rohingya camps at Cox’s Bazar. In some camps, minimum standards for sanitation have been confirmed. But in the fire-affected areas, approximately 15-20 families have been using one toilet in the aftermath of the fire. Women are still facing security issues at night due to the inadequate lighting facilities in the affected areas. Likewise, a safe water supply has not been guaranteed, putting at risk the health of the Rohingya people.

Caritas has been helping an average of 300,000 Rohingya annually for the past three years. Other humanitarian agencies support the Rohingya too, but this is a very complex situation which requires a long-term and concerted effort by the international community to ensure the Rohingya can live in safety and dignity in the future. Bangladesh has taken in over one million refugees and can only guarantee them a future with the support of the international community.