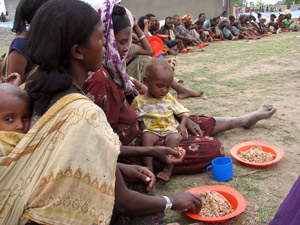 Pope Benedict XVI on Sunday urged G8 leaders to take measures to fight poverty and hunger at a time of soaring food and oil prices.

“Their vulnerability has increased today because of financial speculation and turbulence, with a perverse effect on food and energy prices,” Pope Benedict said. “I call for generosity and farsightedness to help take decisions that would relaunch an equitable development process.”

Noting that some have actually profited from the food crisis, Lesley-Anne Knight, Secretary General of Caritas Internationalis, urged G8 leaders to support the creation of competition rules that would regulate international trade, particularly including trade in food.

“Trade in food is dominated by a few trans-national companies who have immense power,” she explained. “Whether prices go up or down they rarely lose, while at either end of the chain smallholder farmers and individual consumers bear the brunt of the market shocks. The concentration of power of these companies must be diluted.”

Archbishop Desmond Tutu joined with other church leaders in calling on G8 leaders to take action.  “Our world may soon have a billion people living with constant hunger but we produce enough food to feed double the current global population if everyone shared equally,” said Archbishop Desmond Tutu. “World leaders must seek justice in solutions to the food crisis that now faces us.”

The Ecumenical Advocacy Alliance, an international Christian network, said 3 areas need to be addressed to tackle the underlying causes of the food crisis: ensuring the responsibility of governments to protect their people; making smallholder farmers and consumers less vulnerable to price shocks; creating rules that would regulate international food markets.

“Ensuring people have access to adequate food cannot be left to the mercy of the markets,” declared Rev. Dr Ishmael Noko, General Secretary of the Lutheran World Federation. 3“Promoting and protecting the Right to Food is a fundamental responsibility of governments. There is an obligation on the G8 leaders to support weaker economies in carrying out this responsibility.”

“Governments must take measures to make smallholder farmers and consumers less vulnerable to price shocks,” said Nyaradzai Gumbonzvanda, General Secretary of the World YWCA. “Doing so will not be easy. It will need to include subsidizing inputs for smallholder farmers, stabilizing prices; ensuring women have rights to land and setting up social safety nets for poor consumers.”

The General Secretary of the World Council of Churches (WCC), Rev. Dr Samuel Kobia stated that: “The WCC views the primary cause of the current crisis as inappropriate human actions which have induced climate change and skyrocketing food prices. Human actions that are driven by greed have created poverty, hunger and climate change. Humanity must be challenged to overcome its greed.”