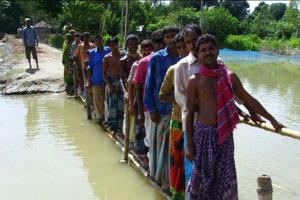 Bangladesh, one of the world’s poorest nations, is also the country most vulnerable to rises in sea-level. The population has already been severely affected by storm surges and catastrophic events in the past have caused damage 100 kilometres inland and the encroachment of the sea has salinated arable land.  It is hard to imagine what these catastrophes would be like with an accelerated increase in sea-level.

Anup Biswas was facing a bleak future before he approached Caritas Bangladesh for help.

He worked on a shrimp farm for US$36 a month. He had inherited a smallholding on which he farmed shrimp and some rice, but the high saline level meant lower harvests each year. He could no longer afford to look after his widowed mother.

In 2006, Anup asked Caritas for help. As part of its mission to assist farmers in sustainable production and income generation, Caritas provided technical training to help Anup gain a better knowledge of vegetable cultivation through eco-farming.

Anup took the training he received and through a Caritas micro finance loan of seeds and saplings, he cultivated his land to produce crops worth US$100 at market.

“Initially I was confused. Was it possible to produce a good amount of vegetables without chemical fertiliser and pesticides?” said Anup. “I did a course using organic manure and the Caritas method, and now I produce good quality vegetables. Last year I did not purchase any vegetables from the market. From the garden I have also kept vegetable seeds for next season.”

Aung Key Ching is another person who benefits from the Caritas scheme. After receiving training, he is now producing enough food for his family, and has saved them from starvation.

“I will not migrate,” he said. “because the major part of my family income comes from my garden.”