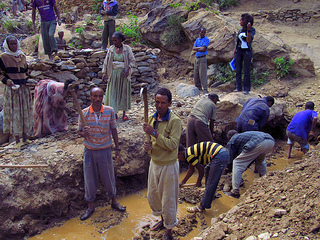 Cash for work program in Ethiopia.

The drought and food crisis in summer 2011 affected millions in the Horn of Africa. How did Caritas Ethiopia help them?

The situation in 2011 was very critical. Thanks to the Caritas member organisations who supported us, our programmes have saved lives. Supplementary food has been distributed for some malnourished children in some pocket areas through Catholic health institutions and this contributed to save lives of this children.

Also, people didn’t lose their assets. Many people are herders here. In places like the Rift Valley where their oxen died from the drought, we replaced them: we provided sheep, goats and oxen. We gave out almost 9000 chickens and more than 13,000 goats. If we hadn’t done that, they might have sold all their animals to buy food.

People received money through our “cash for work” programmes, building rural roads or establish and construct water points or other important infrastructure for their communities. The projects benefit the whole community, and gave people cash during the drought time, when their crops or livestock failed and couldn’t support them. They didn’t have to move to another place as daily laborers to earn money for food.

In regions where people grow crops, we distributed over 60 metric tonnes of local seeds like maize or sorghum.

What kind of work do people find if they move to escape the drought?

Some people left for day labour. There’s commercial farming by companies and the government in lowland areas 200 km away, where there is irrigation. There’s more malaria there. When people move there, their health condition is automatically affected for the worse.

Others go to big towns like Addis Ababa for building construction, road construction to be as daily labourer. They work during the day and stay on the streets during the night since house rent in the town is very expensive. They can afford to eat once or twice a day, but they can’t afford a place to sleep.

The young people who come to Addis—you can see people on the streets who come from drought-affected areas.

If you go to Makele and Adigrat in the area where we have intervened, people have been able to stay in their home areas, students have stayed in school. People could stay in their original place, so there weren’t school dropouts.

Why is livestock so important to these families?

Your cow is your source of income. You save 10 or 12 years to get a cow. Once you sell it, it’s very difficult to replace.

Caritas gave people oxen so they could plough and plant for this year. People are now farming in their areas and they’re expecting a harvest.

Who was most at risk during the drought?

Particularly in the Rift Valley area, we targeted woman-headed households. If they don’t have oxen, they might be displaced.

In our culture, women don’t plow, men do. Women, if they have one oxen, they look for another person with one ox, and he does two days for her, three days for himself.

What other projects did Caritas carry out?

Drinking water rehabilitation, like water spring development. We developed springs in surrounding areas. They protected the source, so now they have clean water and their health improves.

Rural road construction and check dams were part of our “cash for work” programme. The check dams retain rainwater and reduce erosion. If rainwater is retained in the soil, it can produce more later—the soil fertility is improved. People can plant pasture for animals, like elephant grass.

The rural roads really help people in rural communities. Our projects either built or maintained over 150 km of road. One man told us “We used to walk for hours climbing the steep hill carrying our pregnant wives when they are in labour or our sick neighbours, just to reach the main road find a car to take us to a hospital. But now thanks to the access road built through the cash-for-work program, a car can come very close to our door and pick us up.”

Things are better now, but still difficult. What do you foresee for the future?

Well, it’s raining now. So at least we have that. We are planning to promote Drought Recovery and Rehabilitation (DRR) project in different parts of the country to link the already started projects during the emergency period with the new one, so that their existing asset could be built and they might come out of the drought cycle.