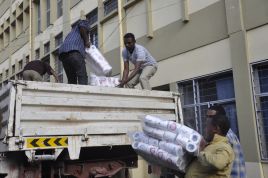 Makeda Yohannes, Communications Officer for the Ethiopian Catholic Secretariat (Caritas Ethiopia), reports on how Caritas is providing aid after tens of thousands of Ethiopian migrant workers are expelled from Saudi Arabia

Thousands of irregular Ethiopian migrant workers have been arrested and deported from Saudi Arabia. More than 127,000 returnees have arrived in Addis Ababa.

The government of Ethiopia has been receiving and accommodating them in various temporary shelters prepared for these purpose. The Ethiopian Catholic Church donated materials worth over 1 million birr in response to the crises.

Recognising that women and children be the worst affected during their stay in the shelters, the Church purchased various sanitary materials for women and children, energy foods and milk as well as bottled water. The fund for this response has been secured from the Irish Caritas member Trócaire.

Archbishop Berhaneyesus Souraphiel C.M, Metropolitan Archbishop of Addis Ababa and President of the Catholic Bishops’ Conference said that the Church has so far been praying for the safe return of the brothers and sisters in Saudi Arabia. He said that this is the first round of response and lot is expected to be done from all parties especially in the reintegration of the returnees.

“The Church will be cooperating with the faithful and partners to contribute our part in the reintegration process for the returnees,” he said.

Archbishop Berhaneyesus called for a day of prayer and alms collection for the returnees in all the parishes in the country.

Minister of Agricultur Mitiku Kassa said that the Catholic Church has always been one of the first to give response at time of emergency in Ethiopia. He said that the government of Ethiopia appreciates and recognises all the support rendered by the Church. He added that the more difficult task is yet to come as the most important phase would be the reintegration of the returnees.

“Once again the Catholic Church has given a timely and appropriate response to the needs of the vulnerable when we are at a time of crisis,” said Mitiku.

After Saudi Arabia launched a crackdown against unregistered immigrants, Ethiopia began mass repatriation operations on 13 November originally projecting that the number of returnees would be 30,000. However, the number is now expected to reach 150,000.