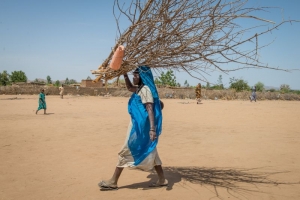 When hunger and poverty turn every day into a battle for survival, climate change loads the dice against the poor. That’s why I’ve been in New York this week to urge for immediate action by governments.

I joined leaders of many faiths at the Interfaith Summit on Climate Change, 21-22 September. At the same time, Caritas supporters around the world joined hundreds of thousands of people rallying in cities like New York, London and Paris, for urgent action to tackle climate change.

Together, our hope was to impress on world leaders meeting at the UN today for a summit on climate change that urgent action is needed.

The message is clear: climate change is a major obstacle to eradication of poverty. Our faith statement read:

“When those who have done the least to cause climate change are the ones hardest hit, it becomes an issue of injustice. Equitable solutions are urgently needed.”

We are the inheritors of two centuries of remarkable waves of technological change, through industrial and digital revolutions. We have seen millions of people being lifted out of poverty across the world with some diseases eradicated forever.

However, the economic growth during this period has come at a cost. Close to a billion people are still going hungry. The world we live in today is growing more unequal.

Through our model of progressing and growing – especially the use of fossil fuels – we have had a decisive impact on the natural world. Lands, forests, deserts, glaciers, rivers and seas are changing.

Whether through poor harvests, arid land, acidic oceans or more extreme and unpredictable weather events (often, disastrous), the impact of the changing climate is unmistakable, is scientifically proven beyond doubt and affects us all.

In a world with enough food for everyone but close to one billion people going hungry, climate change threatens to put an extra 20% of the world’s population at risk of hunger by 2050.

Too much of the abundant, fertile world we were given to protect, cultivate and enjoy has been corrupted. We have become indifferent to the damage we are doing, both to the natural world and to our poorest brothers and sisters. This indifference has created an urgent crisis.

At heart this is a debate about what would want to see – a development which is inclusive and in harmony with nature, or one that excludes and destroys.

“The protection of the environment has been subordinated to economic development. Damaging biodiversity, using up water reserves and other natural resources and polluting the air.” (Aparecida) 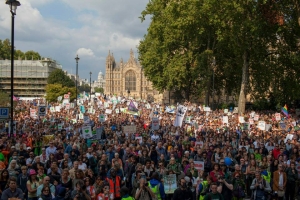 The political moments ahead come with real challenges, but we still see them as unprecedented opportunities to set a positive tone for the future, in our lifetime and for generations to come.

There is a clear message for our leaders: that we have arrived at a crossroads and our choices are stark.

The first road continues to rely on disrupting God’s wonderful creation. The warming and associated extreme weather will reach unprecedented levels in our children’s lifetimes and 40 percent of the world’s poor – who have a minimal role in generating global pollution – will suffer most.

The second road will see humanity take on its common responsibility to shape an ethic of care for the earth and protect it for future generations, where political and economic decisions are guided by a broadened sense of responsibility and concern for the common good.

Shaped by respect for life, and above all for the dignity of the human person, a healthier, safer, more just, more prosperous and sustainable world is possible. An authentic, sustainable development is technically and politically feasible.