Philippines rising: One year after Haiyan – A new house for Amalia

“I thought Typhoon Yolanda would be like other typhoons,” says 83-year-old Amalia. “But it was more like four typhoons in one.”

Amalia, who lives on the northern tip of the island of Iloilo in the Philippines, shudders as she remembers the roar of the wind: it was deafening, she says, like the revving of a bus engine amplified many times over.

With her roof about to be blown away above her, Amalia’s son urged her to take shelter in their duck-house, which he thought would be stronger than her bamboo home.

“I didn’t want to go outside, luckily,” Amalia says. “The duck-house was the first thing to be destroyed.”

As the wind grew stronger, it became obvious that their home couldn’t survive for long. Amalia and her son grabbed hold of whatever they could carry – in Amalia’s case, a Minnie Mouse bag stuffed full of the first clothes she could find – and battled through the storm to their neighbour’s house, which was made of concrete. Even there, with the walls shaking, she thought she was about to die. 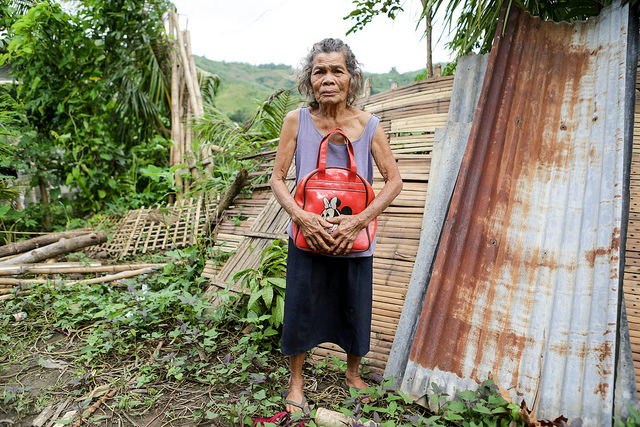 Amelia with her Minnie Mouse bag. Photo by Lukasz Cholewiak/Caritas.

“I just prayed and prayed,” she says. “I couldn’t do anything, so I prayed for forgiveness. I thought it would be my last breath, but praying helped me to overcome the fear.”

After about six hours, when the winds had died down, she and her son returned to what was left of their home.

“It was completely destroyed,” she says. “Everything was soaked, and we didn’t know where our things had been blown away to. We couldn’t even find our pots and pans. I was very sad. I couldn’t stop crying.”

She and her son set about building a makeshift shelter out of the remains of their house. It was tiny, about three foot high, and they had to crawl on hands and knees to get inside. Whenever it rained, water came in through the ceiling, so the two of them were forced to sleep under umbrellas.

“I used to curse the place,” says Amalia. “I was very angry. I kept asking, ‘Why has God destroyed my home?’”

Today, thanks to the generosity of Catholics around the world, Amalia lives in a brand new house with a concrete base, a galvanised iron roof and white hardiflex walls. NASSA (Caritas Philippines) built it, with the support of local carpenters and expert architects who added special features to ensure that it should withstand future typhoons.

“I am very happy about the new house,” says Amalia. “It is very beautiful and very strong. It’s so solid that I’m not nervous any more when a typhoon comes.” 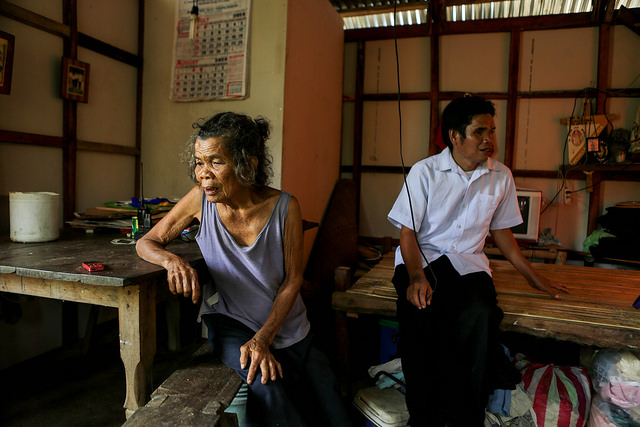 Walking through Amalia’s village, I wish I could show the people who donated money to Caritas appeals in the aftermath of the typhoon the result of their generosity: house after house, gleaming in the sunlight, often standing alongside the flimsy shelters they have replaced.

“I am very thankful that the Church has been able to help people like me,” says Amalia. “At first I cursed the typhoon because it destroyed my house. Now I thank the typhoon for giving me a new home. It was a blessing in disguise.”