“The wind was circulating fast and glass was flying everywhere,” says Flora Badanoy, 39. “The roof was blown off by the gale. It felt like there was an earthquake. We were terrified. Then the water started coming in, with a strong current. We opened the front door and more water came gushing in. I thought it was the end of our lives.”

The Guiuan peninsula in the Philippines was the very first place to be hit by Super-typhoon Haiyan, one of the strongest storms ever to make landfall. The typhoon hit at midnight on 8th November last year. Winds of up to 170 mph hit the coast and huge waves swept in from the sea, flooding coastal villages like Flora’s.

“Our house was made of timber, but our neighbour’s house is concrete, so we’d gone there to take shelter,” says Flora. “We took a bag of clothes and a small amount of food – nothing else.

“We were not expecting it to be a special typhoon. The local officials told us we had to evacuate, but they didn’t say it would be so powerful. And we were not warned that there would be floods. We’d heard there would be a ‘storm surge’, but we didn’t understand what the phrase meant. It wasn’t a phrase we used in our language.”

Flora remembers the roar of the wind – so loud that she couldn’t hear herself shout – and the terror her children felt as water came flooding in under the door.

She and her husband concentrated on protecting the children, covering their heads with pillows to deaden the impact of shards of flying debris. Even so, the children began to panic. “I told them to stay calm,” says Flora, “but one of them fainted in fright.”

For several hours, the family prayed for their lives, with wind and rain swirling around them. Fortunately, the water didn’t rise beyond knee level, and they managed to survive the night.

When they ventured outside in the morning, the damage was spectacular: palm trees had been snapped in half, fishing boats destroyed, and almost every house reduced to a pile of debris. In just six hours, an unspoilt paradise had been turned into a disaster zone.

With trepidation, they returned to find out what had become of their house. It had virtually disappeared: all that was left standing was one wooden post. The family’s clothes had been swept away and their few remaining possessions were soaked.

“I felt happy that everyone was safe,” says Flora, with tears in her eyes, “but we lost our house. That was the most precious possession we owned.”

Flora and her family stayed with their neighbours for five days, before constructing a makeshift shelter out of wood and rubble they gathered nearby. Conditions in the shelter were cramped, and they knew that it would not survive even a moderate storm.

Today, thanks to Caritas members CAFOD and CORDAID, Flora and her family have moved into a new house, with a concrete base and a galvanised iron roof. The structure was built from treated coconut timber salvaged after the typhoon. Local carpenters and expert architects ensured that the house was structurally sound enough to withstand future typhoons. 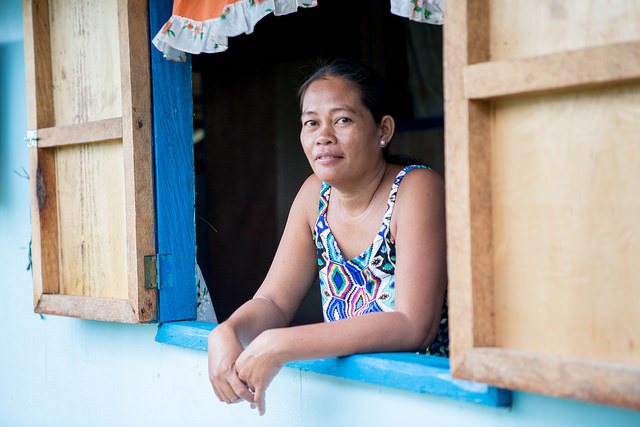 Flora in her new home built by CORDAID, a member of Caritas in the Netherland. Photo by Lukasz Cholewiak/Caritas.

Matthew Carter, CAFOD’s Humanitarian Director, says: ““After a disaster on that scale, the first priority for Caritas is to ensure that people have basic needs – like food, water and some sort of roof over their heads.

“But in the months that follow, it’s crucial to help people build permanent houses that are better than the ones we’re replacing. We didn’t want to build houses that would simply fall down next time there was a storm.

“People can be very proud of their support for. Their donations have transformed thousands of lives.”

Flora and her family have painted their new house blue, and have started to decorate: although they lost most of their possessions, they have managed to find some curtains and a painting to put on the wall.

One year on from the typhoon, life is returning to normal for the family. Flora’s children are back in school, and her husband is starting to make a living again, working as a carpenter for the housing project. Best of all, Flora has another child on the way.

Flora sent this message to people who donated to Caritas: “I am so happy to have received this new house. This house is very strong, with strong foundations made of concrete. I wasn’t expecting to have this kind of house. If I had to choose between our old house and this one, I’d certainly choose this one.

“I am very grateful for all the help we have received. My children are delighted to have a new house. And my next baby is due soon. This will be a new start for our family.”