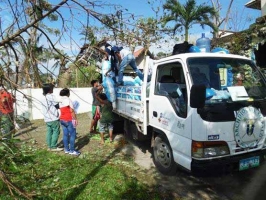 In 2013, the Archdiocese of Palo in Leyte was devastated by Typhoon Haiyan (known locally as Yolanda). Now their emergency unit is giving relief assistance to people affected by Typhoon Hagupit (known locally as Ruby) in Catbalogan City, Samar. They travelled at least four hours by land Monday to reach the San Bartholomew Parish in Catbalogan City to deliver the relief goods for 1,150 families in the province.

“The spirit of Alay (offering) Kapwa (neighbour) is truly alive not only here but also in all of the 85 dioceses nationwide who are helping those who were affected by Typhoon Hagupit,” said Fr. Alcris Badana, who led the mission.

“While Leyte has been affected as well by this recent typhoon, we make it a point to help also nearby dioceses that are most in need of immediate assistance. This is also our way of paying forward the goodness we have received from everyone who partook in the Yolanda rehabilitation efforts,” he said

Aside from the distribution of relief goods, they would also do initial rapid needs assessments on the scope of damage and devastation of Typhoon Hagiput in the area.

Since April this year, the group has been implementing various rehabilitation efforts in Leyte under the #REACHPhilippines programme of NASSA/Caritas Philippines, which is the social action arm of the Catholic Bishops Conference of the Philippines. Among their interventions are the provision of shelter, food security and livelihood, WASH (water, sanitation and hygiene), disaster risk reduction trainings, community organizing and ecosystem recovery

They are also part of the group currently preparing for the much awaited visit of Pope Francis in Palo, Leyte this January. 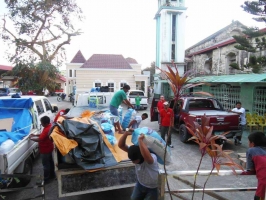 Meanwhile, the Social Action Center of the Diocese of Calbayog headed by Fr. Cezar Aculan expressed his gratitude to the Archdiocese of Palo for its relief assistance.

“This only proves that the Catholic Church is true to our commitment to help the poor and the vulnerable. Indeed, together we are more,” Fr. Aculan exclaimed.

So far the Catholic Church through its social action arm NASSA/Caritas Philippines has already released about P3-million from the local church’s Alay Kapwa emergency and other local funds for the purchase of relief goods typhoon-hit areas.

The Alay Kapwa is the Lenten evangelization and fundraising programme of the Church to raise consciousness and funds for calamities and major social concerns.The Church also recently launched a solidarity appeal to the 85 dioceses nationwide to raise funds for the families affected by Typhoon Ruby.