From mid-January, the Ebola caseload in Liberia gradually but steadily reduced. Several days went by without any new cases reported. At the daily emergency command centre meetings, expectations of hope were carefully whispered about possible zero cases by the end of February. 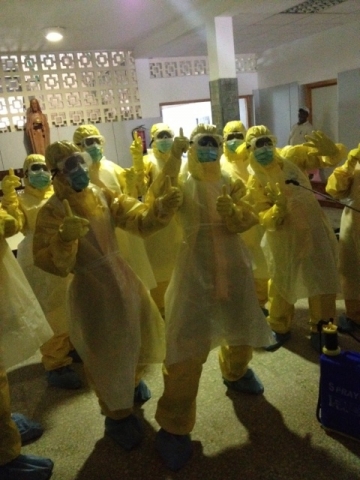 For the past 12 days, there has been no new confirmed Ebola cases in Liberia. Credit: Tim Flanigan

Then the much dreaded incident happened: a man disembarked from a local bus at St. Paul’s Bridge and collapsed on the street. Bystanders helped him back on his feet and brought him to the clinic, where he was diagnosed with possible Ebola. Shortly afterwards the man died. Two of those who helped left in different directions. One to the neighbouring Bomi county in the West after which he travelled to Kakata, north of Monrovia. One to Paynesville City, an Eastern Suburb of Monrovia.

It was a new ‘cluster’ outbreak. This time systems were in place. Correct procedures were applied. Contact tracing teams tracked down people from the St. Paul’s Bridge. After two weeks of increasing “suspected and probable cases” and some 10 plus confirmed cases, the lid was back on the kettle.

In the last week of February, 161 suspected and probable cases were under observation (these are people who have fever, headache, diarrhoea or are vomiting). There were only two confirmed Ebola patients currently undergoing treatment in Liberia, and one of those cases was maybe a false-positive.

Thursday 5 March the last patient, a 58 year old teacher, was dismissed from the Chinese Ebola Treatment Centre in Monrovia. In the past 12 days, there has been no new confirmed cases. If it is maintained another 30 days the World Health Organisation will declare Liberia free of Ebola.

A sigh of relief is going through the country, although people are aware again that we are not safe yet. After all, the Ebola epidemic in West Africa started with only one sick boy in Guinea.

However, the trained volunteers from Caritas Liberia are still reaching out to the most remote communities, to spread the ever more difficult message of Ebola prevention, distributing buckets with soap and bleach in the framework of the hygiene campaign. Only if everybody fully cooperates until the very last step, success will be certain.

Since 27 February the borders have reopened and the curfew has been lifted. Since 2 March schools have reopened and normal life resumes. With the reopening of schools tens of thousands of teachers are back at work. Early morning traffic jams in Monrovia have regained their normal chaotic character. Children in neatly washed and pressed school uniforms are crossing everywhere through the slow moving glacier of steel and rubber.

And despite of the frustration of wasted time and senseless chaos, there is also a slight feeling of relief: “this is Monrovia as it used to be”.