Appeal of child orphaned by Ebola 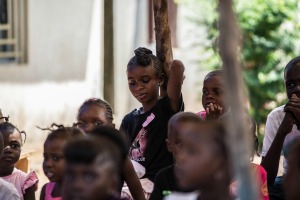 Children in Sierra Leone received aid from Caritas Freetown during the height of the pandemic. Photo by Tommy Trenchard/Caritas

“I hope you remember the girl you met in the centre at Sima Town with her younger brother.” There was a hush as Fr. Peter Konteh, Director of Caritas Freetown read out Yatta’s appeal.

Fr Konteh was speaking at a UN event in Geneva 17 June on Responding to the Psychological Needs of Orphans whose Parent(s) Died of Ebola Virus Disease. The parrallel event at the UN Human Rights Council was co-organised by the Permanent Missions of Sierra Leone, Guinea, and Liberia to the UN in Geneva and by Caritas Internationalis.

This is the letter he received from the child:

I hope you remember the girl you met in the centre at Sima Town with her younger brother. During that time, I told you there is eight of us and that we lose both of our parents. I was also sick with my younger brother but the two of us survived, thank God. But, from that time, my brother is having a problem with his eyesight and he cannot hear well. Even myself, I have pains in my bones and the doctors say this is what happens to most people after they get well from Ebola. Four of us are now back in Kenema living with our aunt and the two youngest among us are now back in the village living with our grandmother. My other two brothers who are in secondary school are still in Freetown with our uncle where they are attending school.

Father, things are very hard with us, our aunty lives with her three children and no husband. We are helping her to sell soda soap so that she can pay our school fees. But two times now they have attempted to rape our younger sister, Hawa, while she was out selling. Our younger brother can still not hear clearly and his teacher said he is not doing fine in school as his eyes also hurt. Sometimes he tells me he is having serious headache. I too get pains in my bones but I thank God I am feeling better than my friends at the centre. I feel ashamed and when I try to ask people for help they always try to make me their lover. One married man with children of my age is one of them.

Father, I am crying to you for help. My two brothers are in Freetown but they say they want to come here because they have to walk to their school which is far from their home and they don’t get money for transport and our uncle is old and not working. Sometimes, I am angry because I don’t even know where my parents are buried and I cannot go to speak to them about what is happening to us. Auntie is also looking like she is tired of us. She quarrels with the neighbours on small issues and she can sometimes be very harsh with all of us. The other day, I caught her crying in her room and that made me very sad.

Aly Diané, Permanent Mission of Guinea, said “the fact that orphans need to be supported and assisted, and that this is a responsibility of both local and international communities.” Paul Wolokollie Tate,  Chargé d’Affaires of the Permanent Mission of Sierra Leone, said the conflicts that had plagued them for years had contributed to the weakening of the health and other infrastructures. He said, “We were beginning to make great progress, but now once again the children are the first to suffer.”

Dr. Ian Norton, expert from the World Health Organisation shared his own experience of seeing many children whose parents had died playing in the “red zones” of the Ebola Treatment Units because their extended family members had refused to care for them out of panic and fear that they would carry the infection into their new homes.

Child psychiatrist Dr. Dainius Puras, a professionally trained child psychiatrist and now serving as the United Nations Special Rapporteur on the Right to Health, spoke of the need for strong community support for children affected by the Ebola outbreak and stated that a close personal relationship with at least one caring adult can build resilience in children who have experienced tragedy and loss.

The rates of infant mortality are among highest in the world in the three affected countries. UNICEF reports that one-third of the world’s out-of-school children live in West and Central Africa. The region must now care for some 16,000 orphans who lost one or both parents to Ebola.

Fr. Peter Konteh identified people as the greatest “natural resource” in these countries and expressed hope that many people will overcome their fear and take responsibility for their orphaned relatives or fellow community members. Fr. Peter offered the following recommendations for adequate and compassionate care of such children:

Participants left with tears in their eyes as Yatta’s plea echoed in their ears and in their hearts, “Please remember us in any way you can.”