Caritas and partners to advance fight against Human Trafficking

Members and partners of the Network of Christian Organizations Against Trafficking in Humans (COATNET) from 33 organisations and countries met for three days in Paris to advance the fight against the heinous crime of Human Trafficking. Human Trafficking strips victims of their freedom and violates the dignity of the human person created in the image of God.

Two emerging trends in global trafficking were highlighted and discussed: that of human trafficking in conflict and post-conflict situations and the trafficking and exploitation among seafarers and the maritime industries. 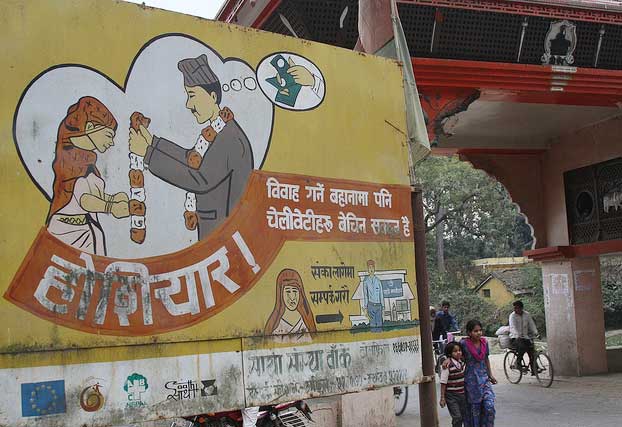 In Nepal a sign warns girls about false promises of marriage. Caritas Nepal runs awareness-raising sessions so that people will be wary of fast-cash offers. Photo by Sheahen/Caritas

Awareness increases on the issue of trafficking in conflict and post-conflict situations were presented through the results of a joint action – research conducted by Secours Catholique and Caritas of Euro-Mediterranean region, and the International Organisation for Migration Research on Trafficking in Crisis situations with similar findings. Both reports highlight the increased vulnerability of families, women and children during crisis situations, such as conflicts and natural disasters.

The Caritas study highlights in particular forced and child marriage for the purposes of exploitation in conflict situations. Families think that with a marriage they can protect their daughters, but the daughters fall prey to exploiters and may end up being treated like slaves for the purpose of sexual exploitation, domestic servitude and begging.

Another feature found by the Caritas study is economic exploitation, as refugees are not typically allowed to enter the legal labour market and are forced into the exploitative grey labour market.

“Trafficking in human beings in conflict and post-conflict situations is a subject on which research has been conducted, and which is seldom addressed by the stakeholders tasked with supporting displaced people and refugees “ says Genevieve Colas from Secours Catholique/Caritas France and coordinator of the research. Both studies called for the international community to address this lack of protection. Coatnet members committed to raise the issue, advocate, and respond programmatically both nationally and internationally before, during and after the crisis.

The situation of seafarers and fishers who are often migrants was identified as another challenge. They are invisible and because of the nature of their work easily become victims of exploitation and abuse. Their working environment makes it difficult for them to seek help and protection in situations of need. Further, though in the maritime sector there are specific laws and conventions, it is difficult to implement and enforce them.

Apinya Tajit from the Apostleship of the Sea of Caritas Thailand says: “Some governments in Asia do not want to identify cases of trafficking of seafarers, because they fear to be downgraded in the US Trafficking in Persons report”.

COATNET members commit to raise awareness of the abuses in the maritime industries to national and international stakeholders, including regulatory bodies, and to form new partnerships to increase identification of victims and strengthen the protective response.

As a general outcome of the meeting, COATNET members committed to continue their actions to inform relevant Human Rights Mechanisms, to advocate the states to respond to their obligations to protect Human Rights of all people, and to mobilize their respective networks and faith communities to work to prevent the expansion of human trafficking, to identify and liberate those who are enslaved, and to support the full restoration of survivors.