“The only thing that survived was the icon,” said Valentyna Dzyhim, a 79 years old grandmother who lives in Chermalyk, a village on the frontline of Ukraine’s civil war. In the ruins of her house, she holds the icon, of the Madonna and Child, a family heirloom dating back to the 19th Century.

“We’d built the house with our own hands. In February, a shell came through the roof and destroyed everything,” she said. “We are old and now we’re left without our life’s work. All we have is our tears. We’ve been good people, good parents and neighbours. We didn’t deserve this.”

Valentyna and her husband Valentyn are pensioners. Once comfortable, they now face a future of poverty. “Our pension is not enough to rebuild. We don’t want to leave though. We want to be near here. This is our home.” 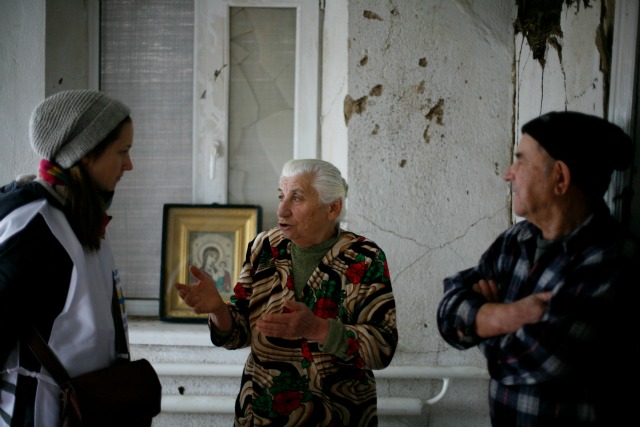 Valentyna and her husband Valentyn in their bombed out home in Chermalyk, a village on the frontline of Ukraine’s civil war. Credit: Matthieu Alexandre/Caritas Internationalis

From the village, ringed by flat horizons, you can glimpse the pro-Russian rebel troops on the other side of the riverbank. And their snipers can see you. Ukrainian soldiers patrol the empty streets. Sandbags are piled on every window. The war that began in the Spring of 2014 is part of daily life.

Lyudmila Chelmaka has lived all her 67 years in Chermalyk village, 45 of them with her husband Volodymyr. They worked the farm together, had two children and four grandchildren, lived a simple life.

Shrapnel holes pockmark the metal gate and side of her house. “A shell hit in April. My husband was caught in the blast,” she said. “Within 30 minutes he was dead.”

Her son lives in a one room apartment with his wife and two children in Mairupol, the nearest city. Living there is not an option.

“Conditions here are bad. Sometimes the house is cut off from gas. My coal supplies are not enough for the winter,” she said. “I live in constant fear. Nobody would like to live here.” She receives financial aid and visits from Caritas.

“Heating in the winter is a problem,” said Fr Rostyslav Sprytnyuk, director of the local Caritas in Mairupol. “They can’t get coal and the gas pipelines are damaged. Some are living in houses partly destroyed by artillery. Some don’t have running water, so they have to go to wells.”

The Ukrainian government doesn’t have the resources to help and the economy has collapsed. “They have lost their jobs, so they don’t have money for medicine, food and fuel,” said Fr Sprytnyuk.

Her husband was arrested in Moscow and is serving ten years. He was doing casual labour, was asked to carry a package that contained drugs and was arrested. They couldn’t afford a lawyer. She got a job in a factory, but when she found out she was pregnant, they fired her.

“I get [the equivalent of] 48 Euros a month in benefits,” she said. “It’s our only source of income. At least 36 Euros goes on electricity. That leaves her 12 Euros for everything else. My baby is sick because it is so cold but I can’t always afford the medicine. The food aid we get from Caritas is essential.”

If life for the 800,000 people on the frontline, the so-called Buffer Zone or Contact Line, is bleak, in the rebel held territories it’s unimaginable.

Yelena Fomina stayed on through the shelling in the worst hit city of Luhansk for as long as she could. Although she was unpaid in her university post, she felt a responsibility to her students to carry on teaching.

“There was no electricity, no food in the shops and no heating. You slept in your winter clothes to stay warm or you turned on the gas oven,” she said. “You never saw anybody. The city was dark after 6pm. Life wasn’t human anymore.”

Now she lives in Kharkiv, where she is a social worker for Caritas helping other displaced people. She still goes back to the Non Government Controlled Areas. “There is a lack of food. You eat grains. The prices are high for everything,” she said.

“The doctors and teachers have all left. There is a curfew at 8pm. You can’t get a passport. You can’t register a birth. It is depressed and empty.” 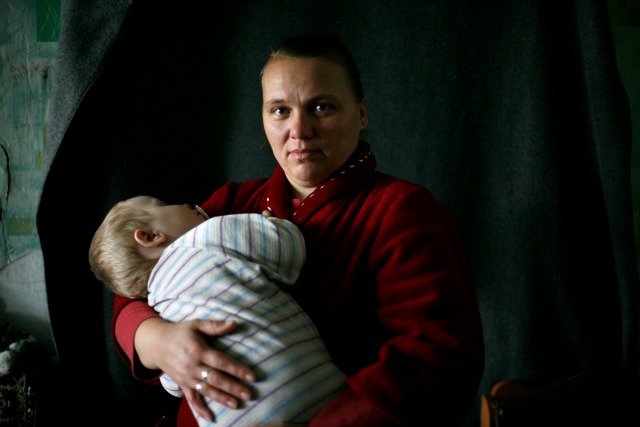 “I know what it means to be cold,“ said Maria Boyko, a mother of four children, 14, 7, 6 and 1 years old. “Last winter, we didn’t have heating for 15 days.” Credit: Matthieu Alexandre/Caritas Internationalis

Caritas had been one of the few agencies to be able to cross over to the Non Government Controlled Areas. “Our convoys of aid helped about 2000 people with food in the rebel areas,” said Fr Vasyl Pantelynk, who relocated Caritas Donetsk to Dnipropetroysk in government controlled Ukraine.

In July, the rebels stopped humanitarian agencies from crossing the frontline. What aid people did get dried up. Nobody knows what the real humanitarian conditions are like, but many fear the worst.

“Half a million people are still left in Donetsk,” he said. “They don’t receive social payments, the economy is dead, there are no schools, banks and few hospitals functioning. People are living in their basements.”

Caritas says it’s vitally important that humanitarian access is granted. In the meantime, Caritas and other agencies are reaching those they can with aid.

“It’s war,” said Fr Rostyslav Sprytnyuk in Mairupol. “I have had three families who have fled the fighting living in my house. I have had friends killed. For me the heartbreak is personal. We need to keep providing this assistance. People can only survive through aid agencies like Caritas.”