Home away from home in Mexico

[Migrants are] “enslaved, imprisoned and extorted; so many of these brothers and sisters of ours are the consequence of a trade in human beings. We cannot deny the humanitarian crisis which in recent years has meant migration for thousands of people, whether by train or highway or on foot, crossing hundreds of kilometres through mountains, deserts and inhospitable zones” Pope Francis

It’s been 25 days since Joseph left his country with the desire to seek a better future for his family, like many of his compatriots, because while violence and lack of opportunities remain, this won’t be possible in Honduras.

At 52 years of age, he just wants to get to the United States to work in a place where wages are fair. He believes it it will be difficult at his age, but the dream of arriving and being able to get support for his children’s education encourages him to continue the journey.

Although the journey has been difficult, Joseph is resting at the Casa del Migrante, a few kilometres from downtown San Luis Potosí, capital of the state with the same name. The hostel, at the side of the tracks, is entered through a small door whose appearance is always deceptive. When you go through it, different people appear with their own stories, but their faith and hope are very similar: to get into the United States and help their families. 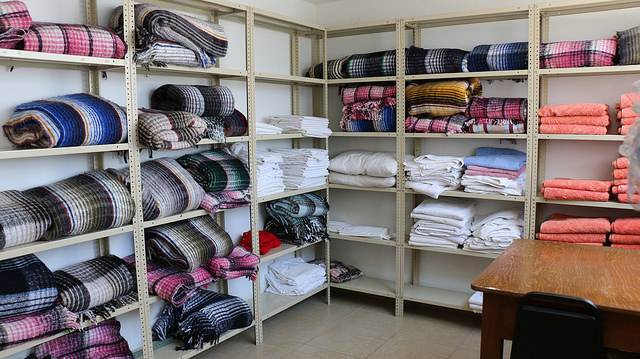 Pillows and blankets for migrants at Casa del Migrante. Photo by Caritas Mexico

The house which occupies almost the entire block, offers assistance to travellers from south of the Mexican border, such as Honduras, Guatemala and El Salvador, who, like José, have opted to use this route. They arrive on “The Beast”, the freight train that crosses Mexican territory, or in buses, but the hostel also accommodates Mexicans who decide to head north for the same reasons as their Central American brothers and sisters.

There’s constant movement in the Casa del Migrante. Night and day someone arrives to be welcomed. No matter what time, or who knocks on the door.

Andrea Ávalo, who comes from Michoacán state west of Mexico City, decided to leave her village with her husband due to the rising tide of insecurity. Where they come from you cannot work; criminals take a cut if you do so. With her one-year-old son Joshua in her arms, she says her plan is to reach the border and be able to settle in this region. She doesn’t want to cross the border into the United States, but she and her family don’t envisage going back to Michoacán. They’re refugees in their own land.

She and her husband heard about the Caritas San Luis Potosí hostel. There they told her she’d have a place to stay rather than sleeping out in the city’s streets. Moreover, there was a dining room, run by Mrs Lupita, a Honduran cook who prepares the three meals served during the day.

Grateful for the hostel’s hospitality, she was able to rest in the dormitories reserved for migrants arriving as a family. She also had the opportunity to wash her clothes in a special area for this purpose, and wash little Joshua in the bathrooms, which are separate for men and women. When she had free time, she was able to take your child to the local play centre so he could enjoy himself. 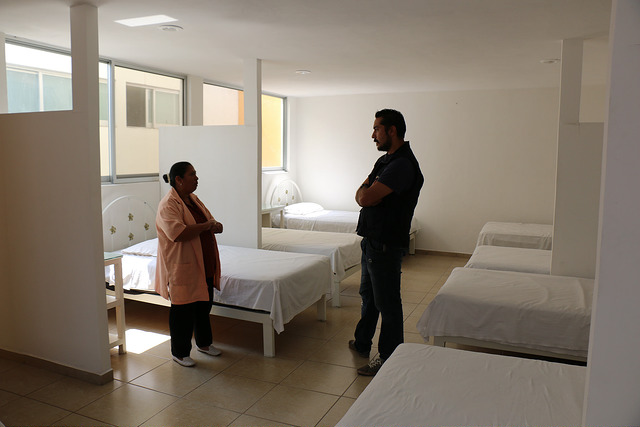 The house has a registration area, which deals with new arrivals, where you are asked to provide standard information; separate bedrooms for men and women; playgrounds, with a small shop if you want to buy sweets or soft drinks; and a clothing dispensary, as well as sneakers and travel items, which are free for those in need.

If travellers need to communicate with their families, a special area is set aside for this service. As there is still no support to cover this expense, the cost of these calls is charged. This area also provides computer access as an alternative means of communication.

For the manager of Caritas San Luis Potosí and the Casa del Migrante, Fr Ruben Perez Ortiz, it is vital that migrants are treated with dignity as persons. Therefore, he thinks it is extremely important to provide all kinds of assistance to those seeking hope for their families, and that they are able to do so in these houses.

The work of the Church is to provide a decent and safe place for those in need, regardless of their origin, condition or religion. But only basic services are provided, so it’s necessary to consider other kinds of guidance that might help.

Therefore, various information units have been set up aimed at clarifying these travellers’ doubts. Examples include the State Commission for Human Rights, which is responsible for explaining migrants’ rights in Mexico; the collaboration of the Institute for Women in supporting women and children regarding preventive healthcare measures; and, finally, the establishment of a unit for detecting HIV.

Father Ruben is grateful for the solidarity of those who have provided resources, via the Church, to maintain this migrants’ hostel. However, he urges people to carry on providing support to offer a helping hand to those seeking a better future, because for him we are all citizens of the world and therefore deserve the same treatment wherever we go.