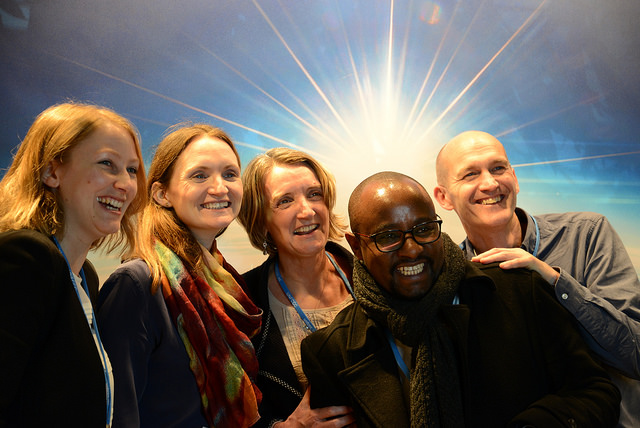 Some of the Caritas delegation in Bonn. Photo by Caritas

“We all stood in solidarity and cooperation with each other,” says Julianne Hickey, Director of Caritas Aotearoa New Zealand, from the Climate Conference in Bonn, speaking of the united front between Catholic aid agencies at the event.

Nine Caritas members from Europe, Africa and Oceania have brought the voices of the poor to the 23rd session of the Conference of the Parties to the UN Framework Convention on Climate Change (COP23), from 6 to 17 November. Their key message is that environmental care must go hand in hand with social justice and the fight against poverty.

As Dr Peter Neher, President of Caritas Germany, says in this article, “The specific task for Caritas regarding climate protection is to combine ecological and social issues. In his encyclical “Laudato si”, Pope Francis urges people to think about these ecological and social problems in combination rather than see them as separate issues.”

After tense negotiations between rich and poor nations, a decision has been reached to address the “socioeconomic and food security dimensions of climate change” in agriculture. This agreement is urgently needed, says the Caritas confederation, which has been pressing for an international programme of work on agriculture for two years. The latest UN report on food insecurity in the world has shown that for the first time in 10 years, the number of people suffering food insecurity is rising, with climate change being a main cause.

Low rain fall in Kenya in 2016 has led to a severe drought in the Arid and Semi-Arid Lands. As a consequence, hunger levels in the country have doubled over a six-month period. Photo by Bente Stachowske/ Caritas international

Caritas hopes this decision will lead to the poorest people getting access to adequate food, and promote a transition to sustainable, low-emissions farming that respects the environment. Caritas is working with communities to adapt farming methods to resist extremes of weather, for example through water storage systems, drought resistant seeds, and agro-forestry alternatives to slash-and-burn agriculture.

The conference showed an impressive number of events about the human rights implications of climate change. Caritas applauds the adoption of the first-ever Gender Action Plan, that will develop policies specifically addressing the negative impact of climate change on women and girls. Women farmers, for example, make up 43 percent of agricultural workers in developing countries, so must be equally involved in decisions that profoundly affect their futures.

Another positive step forward is the Local Communities and Indigenous Peoples’ Platform, which recognises the importance of indigenous knowledge. As Benson Kibiriti of Caritas Kenya says, “It is very hard to make a decision on behalf of someone who is not included in your conversation. We need to bring these people on board, we need to learn from them and together come up with solutions.” Caritas Internationalis expects this platform to ensure the active participation of local communities and indigenous peoples in climate policies, and to strengthen their capacity to protect biodiversity and sustainability.

Caritas also welcomed the announcement that Germany will double the amount of climate finance it provides to developing countries by 2020. However, Caritas called on governments to ensure that the money actually reaches those who need it most. 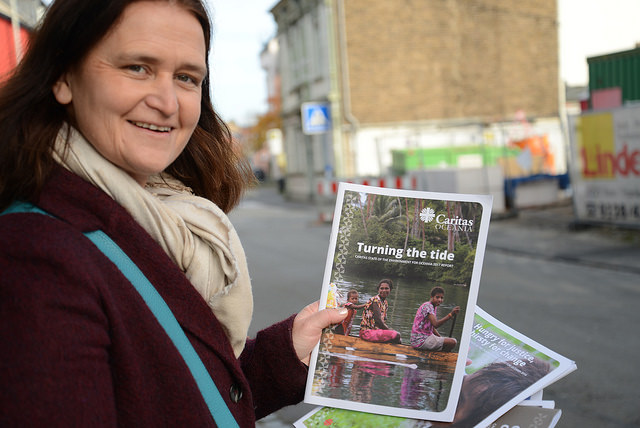 Julianne Hickey, Director of Caritas Aotearoa New Zealand, with a new Caritas report on the impact of climate change for coastal-dwelling communities around the Pacific. Photo by Caritas

“In Oceania, one of the stories we keep hearing is that climate funds are not reaching those who are most impacted by climate change,“ says Julianne Hickey of Caritas Aotearoa New Zealand.

“There are billions and billions of dollars available, but for communities who have to move and to migrate, for those who have to learn new ways of being, they are not receiving the climate finance that they need. People’s houses are literally floating away.”

The job of Caritas delegates in Bonn was to bring the voices of people like these to the meeting tables of decision makers and world leaders.