Keeping watch in Kasai in Congo

A brutal conflict emerged in Kasai in the Democratic Republic of Congo between tribal militias and the government armed forces in August 2016 following the killing of a traditional chief. Over 3000 deaths have been recorded by Catholic Church parishes. Hundreds have been mutilated and raped. Villages have been sacked and burned and homes, churches, schools and health centres destroyed. By July 2017, the United Nations had already documented 80 mass graves. 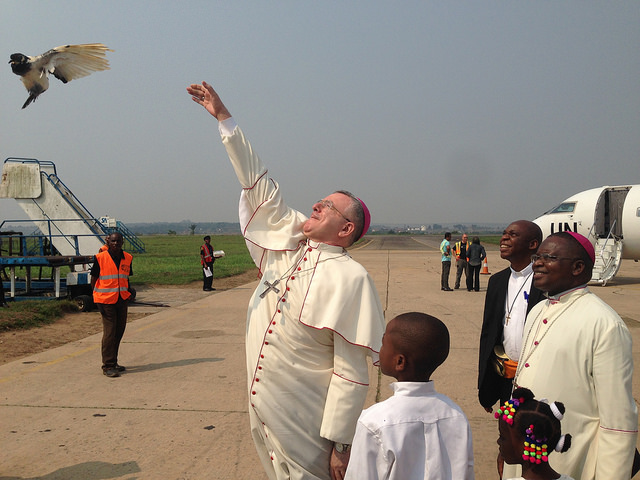 The apostolic nuncio, Monsignor Montemayor, releases a dove upon his arrival at airport in Kananga, Kasai on 7 September. He is accompanied by the archbishop of Kananga, Monsignor Madila. Photo MONUSCO/Joel Bofengo

Thousands have fled to neighbouring Angola and an estimated 1.4 million people are internally displaced in the country. The conflict has since degenerated into inter-ethnic fighting and the recruitment of children as soldiers by the militias is commonplace.

Farmers have moved away from the fields and have missed three crop seasons resulting in a lack of production and massive food insecurity for the overall population and region. Road barriers have also been erected by the government in several villages preventing the population from accessing fields and mining areas.

Fifty percent of the economy of the city of Tshikapa in Kasai is based on diamond mining.  The Congo border with Angola, which supplies basic needs is also inaccessible. Now, although security is uncertain displaced people are returning to their villages, generating additional humanitarian needs.

There’s a general sense the crisis has been forgotten. Funding has been slow to mobilise: the US$64.5 million flash appeal launched in April 2017 and developed by the UN Office for the Coordination of Humanitarian Affairs (OCHA) remains largely underfunded (37% contribution so far).

The UN refugee agency lacks resources to respond to the large-scale crisis. From the US$100 million required for the Congolese Situation and the Angola Response, only 17 per cent has been received.

Caritas is one of the few local structures remaining with local and displaced communities in Kasai. Caritas Congo has been key in gathering information on the needs of the people by setting up a humanitarian watch system with all Caritas dioceses affected by the crisis. Caritas regularly informs the humanitarian community about the situation. This has enabled large-scale interventions. Now Caritas is focusing on the return of the displaced to their villages.

Caritas Internationalis issued an emergency appeal in September with a budget of US$450,000 (390,000 Euros) aimed at improving the living conditions of 9000 people in the diocese of Luebo in Kasai.

The effects of the crisis in Luebo have been catastrophic: at least 2623 deaths were recorded, 2767 houses were destroyed, 140 schools, 28 health centres and 30 religious missions damaged and 62 mass graves containing remains have been discovered.

Caritas Germany is financing the distribution of essential household items in Luebo and Caritas Italy has also been a long-time partner.

Caritas is focusing on advocacy efforts with member organisations, political actors and donors to raise funds at the country level and to facilitate the return of the displaced persons to their communities of origin.