Caritas helps Rohingya batten down for monsoon and cyclones

With monsoon rains and the onset of the cyclone season expected during the next few weeks, fears are intensifying for the safety of Rohingya people living in makeshift shelters in Bangladesh refugee camps.

Many of the 1.1 million Rohingya Muslims who have fled military persecution in Myanmar are living on bare earth floors under tarpaulins, with almost no protection from the elements.

The majority suffered greatly even before arriving in the squalid conditions of the camps. 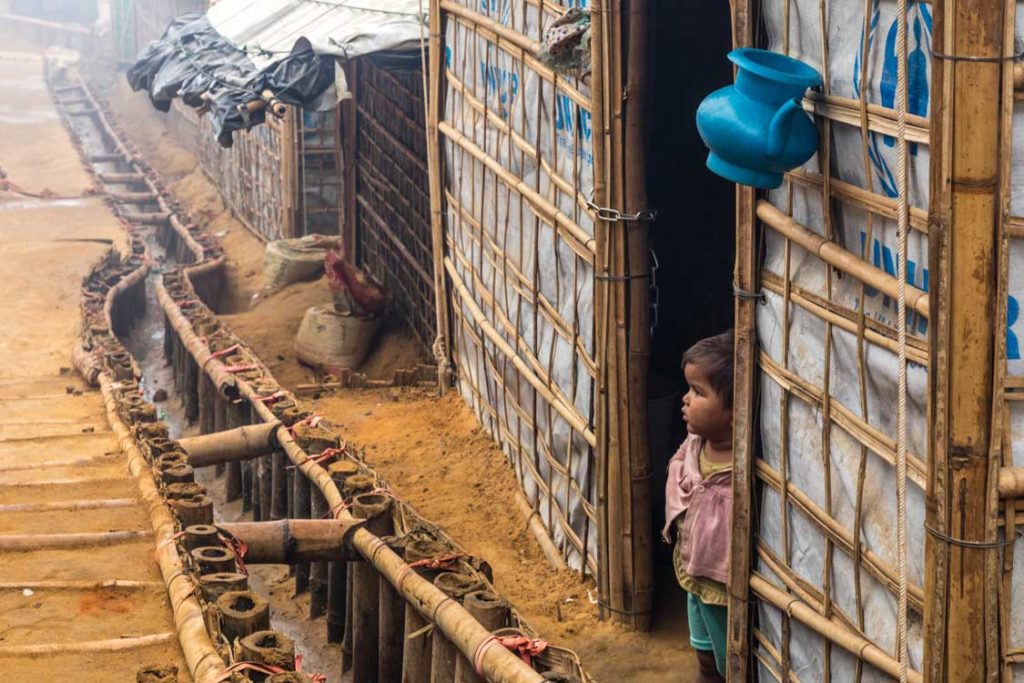 Through a Caritas cash-for-work activity, Rohingya refugees used local materials to build structures such as drainage and terraces to mitigate erosion and flooding in the refugee settlement. Photo by Christopher Reichert/CRS

Some 688,000 of the Rohingya in Bangladesh fled a Myanmar army crackdown that began in August, bringing with them stories of murder, rape and burning villages.

Now they face another possible catastrophe. Their camps in southern Bangladesh lie in one of the most deadly flood and cyclone prone areas on earth.

The refugee settlements have grown rapidly and chaotically, leading to extremely congested shelters exposed to flooding, landslides and other weather-related-hazards.

The UN estimates that up to 200,000 Rohingya refugees will be directly at risk this monsoon season and are in need of urgent relocation.

Caritas is working with other aid agencies to help shift those most at risk and to distribute shelter-strengthening kits, particularly to the elderly and other vulnerable people.

Caritas Bangladesh and Catholic Relief Services (CRS) have completed a pilot project, with UNHCR funding, which is hoped will be replicated across Rohingya communities as quickly as possible to mitigate the effects of monsoon rains and cyclones.

The team used UNHCR topographical aerial data to identify low-lying and steep areas exposed to flooding and landslides. It then provided Rohingya in those areas with vital improvements, helping them to build more resilient shelters, cement-lined drainage, retaining walls and sandbag paths. 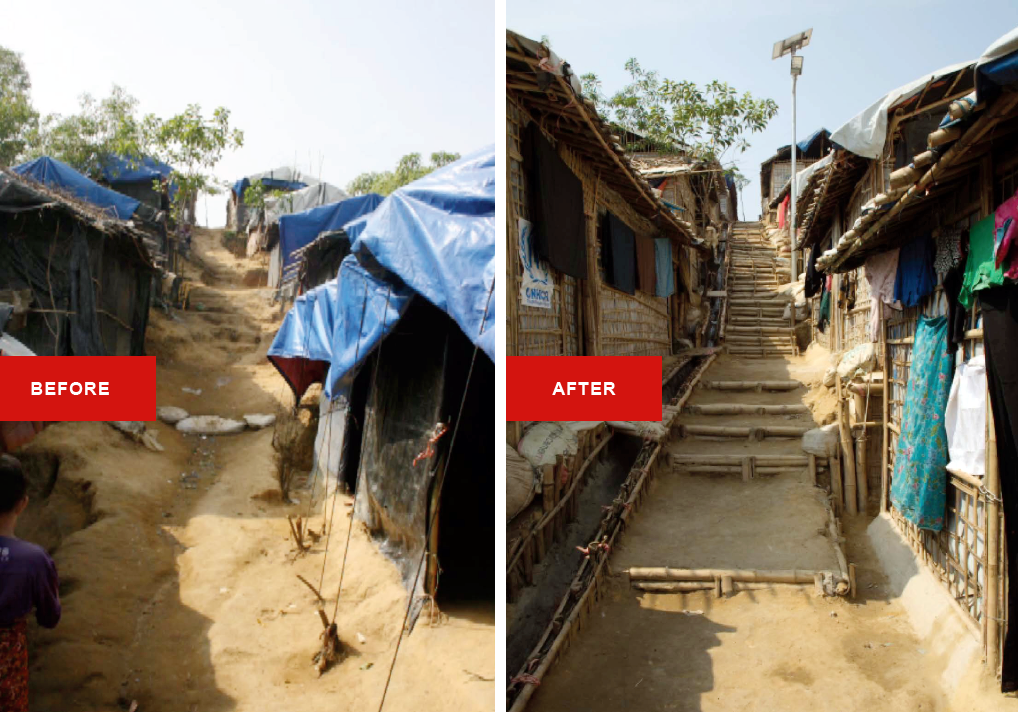 Before the work was done, rickety shelters were covered loosely with tarpaulin and stood either side of open channels running down eroded gullies on steep clay slopes.

Now residents have transformed the shelters into reinforced structures with sloping roofs and basic windows, protected by irrigation ditches and accessed by neatly terraced, bamboo-strengthened steps.

The team also facilitated the installation of bins, bathing spaces, solar pathway lighting, and a tube well and a bamboo bridge.

“We are now living in a strong shelter with dignity and in hygienic conditions because of Caritas,” said Mrs Aklima, 38, a camp resident and beneficiary of the pilot-scheme in Cox’s Bazar, the Bangladeshi town where most Rohingya refugees have sought shelter.

“Their engineers have developed our pathways and provided street lights near the tube wells, toilets and bathing place,” she added. “As a result we are able to move easily even at night without fear.”

Another Rohingya, who has taken refuge in the same area, said the work was timely, given the coming rains.

“Caritas engineers improved our pathways, protected our area with sand bags and bamboo, and strengthened our shelters, ensuring our security for the coming monsoon,” said Shamsul Alam, 40.

He added that the project had also improved steps along roads with sandbags, solar lights and a bridge, making it easier to reach the camp office and distribution centre. 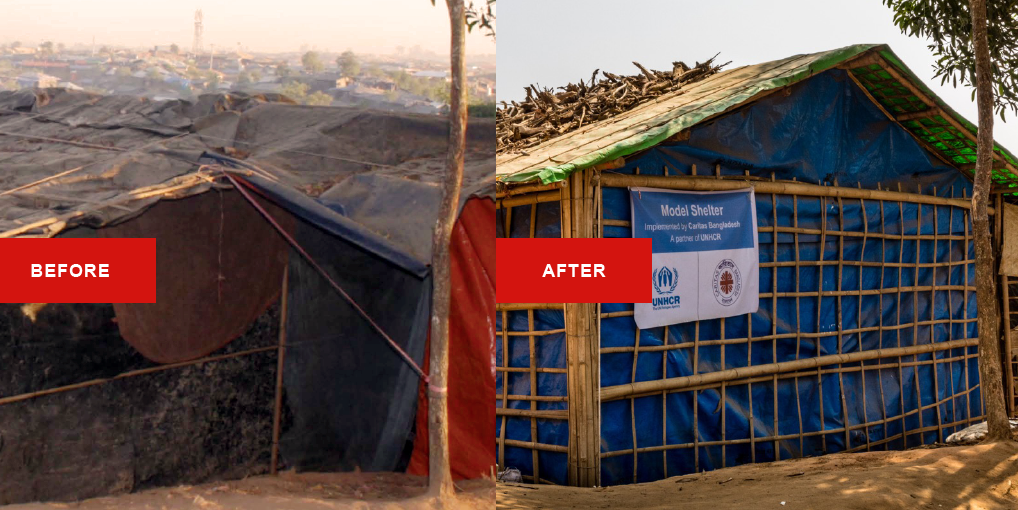 In less than a month, the pilot community of 791 residents upgraded all of its 182 homes and built 20 bathing spaces. Residents installed 2.25km of community infrastructure such as retaining walls, pathways and drainage.

The work was carried out in close consultation with the community at every stage of its development, with the team collaborating with two focus groups, one with females, the other males.

“Caritas staff always talked with us to find out our problems and their solutions,” said Abul Kalam, 45, a resident of the same camp.

“They valued our opinion and all the work has been carried out with our involvement and according to those discussions and decisions taken with us.”

“The sense of pride is palpable, and many community members have initiated additional improvements, such as home gardens where guava, chilli, tomato and eggplant are being grown,” he added.

Although it’s difficult to predict the impact of the coming season, residents and technical staff believe the community infrastructure will protect the Rohingya during the monsoon.

“People are now safe and able to live without fear as shelters have been constructed using a disaster-friendly technique,” said Caritas engineer Sydul Islam.

“All shelters at risk of landslides have been protected with sand bags and bamboo retention walls, so all the families should be protected from the coming monsoon,” he added.

The project was also cost effective, with $484 per household, or $111 per person being spent in total, including community infrastructure.

“Interventions and methods from the pilot should be rolled out before the cyclone and monsoon season, prioritizing spontaneous settlements,” he said.

Caritas is looking ahead beyond the upcoming monsoon season, digging in for the long haul.

Recently UNHCR released a statement saying: “conditions in Myanmar are not yet conducive for [Rohingya] returns to be safe, dignified, and sustainable”.

And so, as co-head of the UN’s shelter sector, Caritas is proposing more durable and comfortable shelters. It has prepared the designs of five types of mid-term shelters on which all future shelters at the camps may be based.

The shelters will have space for 5 family members and be built using local materials and human resources. The designs ensure privacy for men and women, and air passages, drainage and strong foundations, walls and hipped roofs.

They are intended to protect against extreme weather and allow the Rohingya to live in dignity.

Caritas’ work with the Rohingya has been on an epic scale

Last year’s exodus created the world’s fastest growing refugee crisis, with Rohingya escaping with little or no possessions, some wounded, and many children malnourished.

The UN says the violence against the Rohingya constitutes ethnic cleansing, with senior officials saying they believe increasingly that it likely constitutes genocide.

The UN estimates that 60 per cent of the Rohingya who have fled into Bangladesh from Myanmar are children. Of those more than half a million children, 12,000 are orphans.

To meet this challenge, Caritas is working to provide 360,000 Rohingya refugees with comprehensive support, ranging from food, blankets and kitchen sets to shelters, latrines and infrastructure maintenance. The Caritas budget currently stands at nearly Euros 10 million.

Team members have so far distributed food to 40,000 families and helped the same number with site improvement works and rebuilt or strengthened shelters for 1,600 households.

Caritas has completed the construction of 19 deep tube wells, 50 bath houses and 150 latrines, with more on the way.

Caritas is also training volunteers and developing messages to promote sanitation and hygiene, and has so far distributed over 5,400 hygiene kits and facilitated hygiene awareness session for 5,000 families. 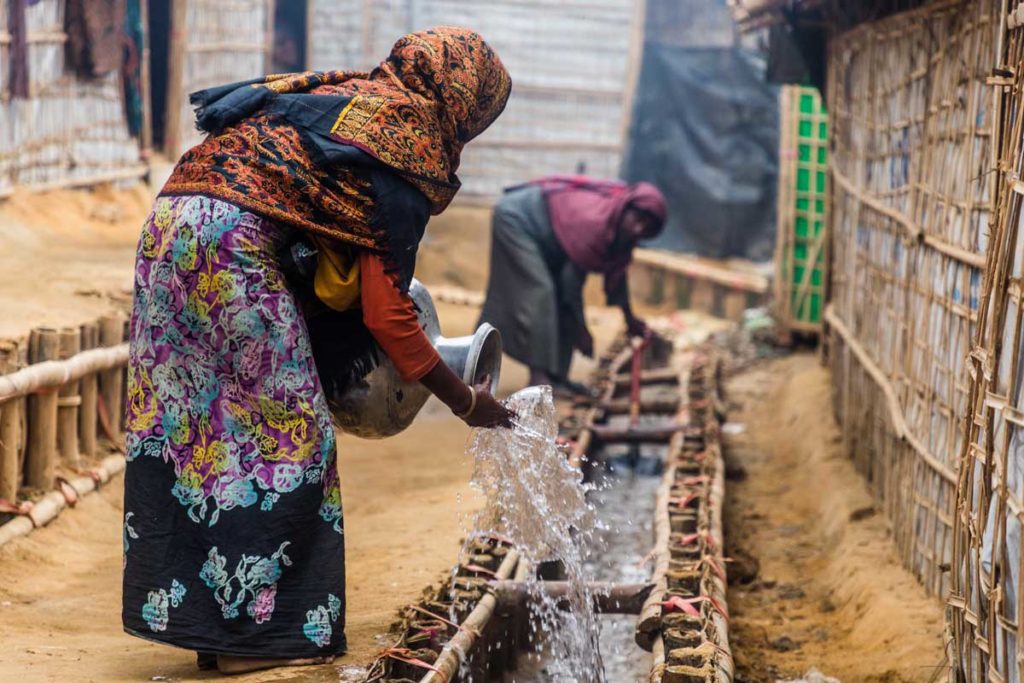 Caritas focused on protecting women and children from trafficking and violence. Photo by Christopher M Reichert/CRS

It has focused particularly on vulnerable groups, for example protecting women and children from trafficking and violence.

Team members have shared protection and anti-trafficking messages, trained community members to counsel, built child-friendly spaces for learning and playing, and educated men to advocate on behalf of women.

The Rohingya are an ethnic minority who live mostly in Rakhine State on the western coast of Myanmar, and practice Islam. They have been marginalised and forced to accept poor living conditions in the border areas of Bangladesh and Myanmar for decades.

In the 1980’s, Myanmar’s government denied the Rohingya their nationality, claiming that their presence in Myanmar was not legal. Since then, there has been an influx of Rohingya asylum-seekers into Bangladesh, especially during periods of persecution in Myanmar.

The Pope turned international attention on the intense suffering of these refugees. “I bear with me whatever you share with me,” he said, moved to tears by the encounter.

Caritas will continue to share the journey of the Rohingya people as they face the monsoon and cyclone season and whatever hardship lies ahead.