Giving hope to the Middle East 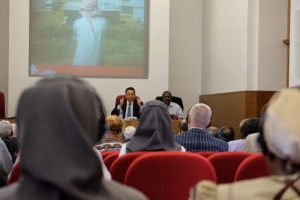 Caritas leaders spoke of a Middle East in intensive care, suffering from multiple traumas. They were attending a Caritas Internationalis conference 15-17 September in Rome to discuss a coordinated regional and global response to the crises in the Middle East.

Caritas Internationalis Secretary General Michel Roy said, “Our duty is to give hope to communities in the Middle East. As well as providing aid, Caritas organisations will work at a national, regional and international level to call for a Middle East open to all faiths, where human dignity and rights are respected, and everyone has the freedom to live in peace with their neighbours.”

Keynote speaker, former government minister Damianos Kattar from Lebanon explained that the needs are so overwhelming that meeting them will be impossible.

In Syria alone, if the war stopped today, it would cost more than a $100 billion and 15-25 years to rebuild the country. Extremists in Iraq and Syria are carrying out widespread ethnic and religious cleansing in the large areas under their control. Palestinians are living in an open prison in Gaza and are denied their dignity, land and rights in the occupied territories.

Voices from the region predicted the humanitarian crisis in Syria and Iraq will get worse in the immediate future as conflict escalates, fuelled by weapons from foreign governments. The collapse of millennia old pluralist communities was highlighted.

“Life and death are at stake,” said Bishop Shlemon Warduni of Iraqi, urging for the human rights and freedoms of all peoples be protected.

“Christians in the Holy Land live under the shadow of Christ on the Cross, a symbol of suffering in the Middle East,” said Fr. Raed Abusahliah, who went on to say the exodus of Christians from their homelands will be a tragedy for all faiths in the region and for the world. 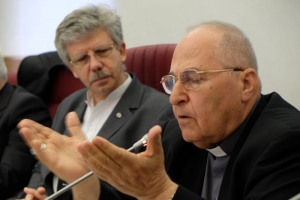 Msgr Walduni of Caritas Iraq: “We want the freedom to practise our religion. We want our human rights. We pray to Christ on the cross to deliver us.”

As well as the persecution of minorities such as Christians and Yazidis, a key concern was the occupation of Palestinian territories and the blockade of Gaza.

Faced with the scale of the crisis, Caritas organisations say they must build more resilient communities through interfaith reconciliation and community empowerment.

Caritas delegates agreed on a long-term work plan that will focus on inter-religious cooperation, community peacebuilding, strengthening national Caritas organisations and working more closely with Church and other faith-based groups.

Archbishop Youssef Soueif, President of Caritas Cyprus and board member of Caritas Internationalis said, “This forum will help us to strengthen our humanitarian aid, to do more to advocate for the dignity of all human beings and to promote peace and reconciliation based on the Christian message of love for your neighbour.”