The days when Liberia’s street were empty are over. At the height of the Ebola epidemic, only the blare of sirens cut the quiet as ambulances rushed to the latest suspected case. 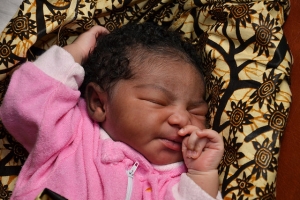 Maternity services are critically important, but since the Ebola outbreak in Liberia, members of the community have been more reluctant to visit health clinics.
Photo by Michael Stulman/CRS

Medical, government and aid officials still meet every other day to hear the latest numbers on new infections and deaths. The number of new suspected cases has fallen from 100 in September to below 3 in January. Now we’re hearing of more people discharged as healthy or who are diagnosed as ‘No Ebola’ after observation. Ambulances still can be heard, but increasingly they’ve found people sick with dysentery or malaria.

Only two provinces, the capital Monrovia and Grand Cape Mount County on the border with Sierra Leone, have reported new infections in the last week.

That’s a reason for joy, but also for worry. In a country were malaria and dysentery are commonplace, more people should be going to the doctors.

It means that people aren’t going to medical clinics if they are sick. This is dangerous and could lead to local outbreaks of Ebola. We have more work to be do training community focal points to explain the importance of seeking medical help if you’re ill.

Our worry is that people will become complacent on prevention now that there are no longer as many deaths or sick people. We need to get the message across that it is still vital. Only when a country has gone 6 weeks without a case, is it declared Ebola free. For Liberia that could be until the end of 2015.

Survivors last memories of home are often of being taken away by people in protective suits to spend weeks or months in isolation. They have suffered the stress of a deadly illness and the loss of family.

Now they return to their villages to find their homes and belongings have been torched by fearful neighbours thinking it would eradicate Ebola. After the euphoria of survival, they come back to find everything is gone and their community is afraid. Addressing these distressing situations will be important for Caritas.

Then there are the many Ebola orphans. 500 alone in Lofa county. There are not enough orphanages to admit them. Short-term emergency projects can’t meet the long term needs. An orphanage cannot be for just 6 months. 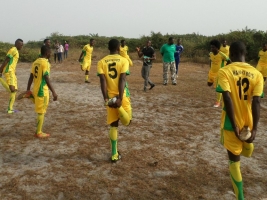 Cordaid, (Caritas Netherlands) is supporting the ‘Waikiki’ team play their first exhibition game . After half a year at home, the players are again busy training. Credit: Cordaid/Caritas

The extended family and the community have always played an important role in caring for orphans in Liberia. But Ebola has used up people’s reserves. There is a lack of food and money to shelter these children in need.

We need to ensure that these families have the necessary support so they can recover their livelihoods and provide for the orphans. Farmers can restart their production with a supply of seed rice and hand tools. Artisans and small traders benefit from customized support. We need to make sure they have enough for tuition fees and school supplies.

Life is slowly coming back. A sign of that is in football-mad Liberia, matches are happening. Cordaid, (Caritas Netherlands) is supporting the ‘Waikiki’ team play their first exhibition game in preparation for entry in the third division. After half a year at home, the boys and girls are again busy training. Maybe with empty stomachs, but with new expectations for the future.