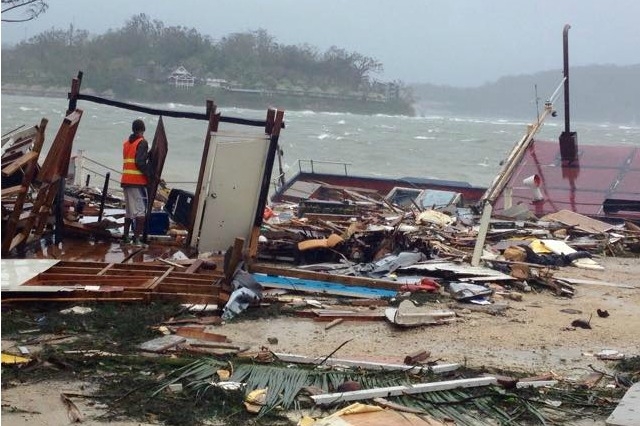 Caritas Oceania agencies, including Caritas Australia and Caritas Aotearoa New Zealand are leading the Caritas Internationalis response in Vanuatu with the Catholic Church after the Pacific island nation was devastated by Cyclone Pam.

The Diocese of Port Vila has established a Disaster Response Committee to assess damage and plan a coordinated response. Shelter is a major priority and a number of churches are being used as evacuation centres.

“In Port Vila the destruction is everywhere, and there’s no news from anyone around the islands yet,” said the Bishop of Port Vila, John Bosco Baremes SM from the devastated capital. “There’s just no shelter, with so much having been blown away, and people will need somewhere to shelter while they rebuild.”

Cyclone Pam veered west of its predicted path putting many islands near the cyclone’s destructive centre. Up to 90 percent of buildings on one of Vanuatu’s main islands have been destroyed or damaged.

Mark Mitchell said, “The [Church’s] Disaster Committee is identifying needs and is working on organising the response. A number of shops are open in Port Vila and the roads are cleared. There’s a lot of cleaning up going on and people are very active.”

Caritas says the disaster is unprecedented for Vanuatu and that the Church plays a key role in reaching out to the most vulnerable communities, particularly those on the margins in the outlying islands.

“On arrival to Vanuatu, it was certainly an eerie feeling as we flew in – coming into a capital city without much lighting it was quite clear that a lot of the town in particular has been severely affected,” Ms Lalor said.

“I awoke in the morning and saw the devastation around me. I’m actually living with one of the members of our partner organisation the Diocese of Port Vila and she’s in an area that’s been really severely impacted and has been personally affected with half of the roof blown off her house.

“After responding to the immediate needs following the cyclone, we are committed to accompanying Vanuatu and other Pacific nations that remain so vulnerable throughout the cyclone season.”