Surilma Urrieta sits in her cement courtyard rocking her 7-month old daughter, Rosymar, as she sips from a baby bottle. The formula it contains is a prized-resource for the family who knows far too well what it means to go without. It was only 2 months ago that Surilma struggled to feed not only Rosymar, but also her twin brother, Eduardo, who were both born premature. 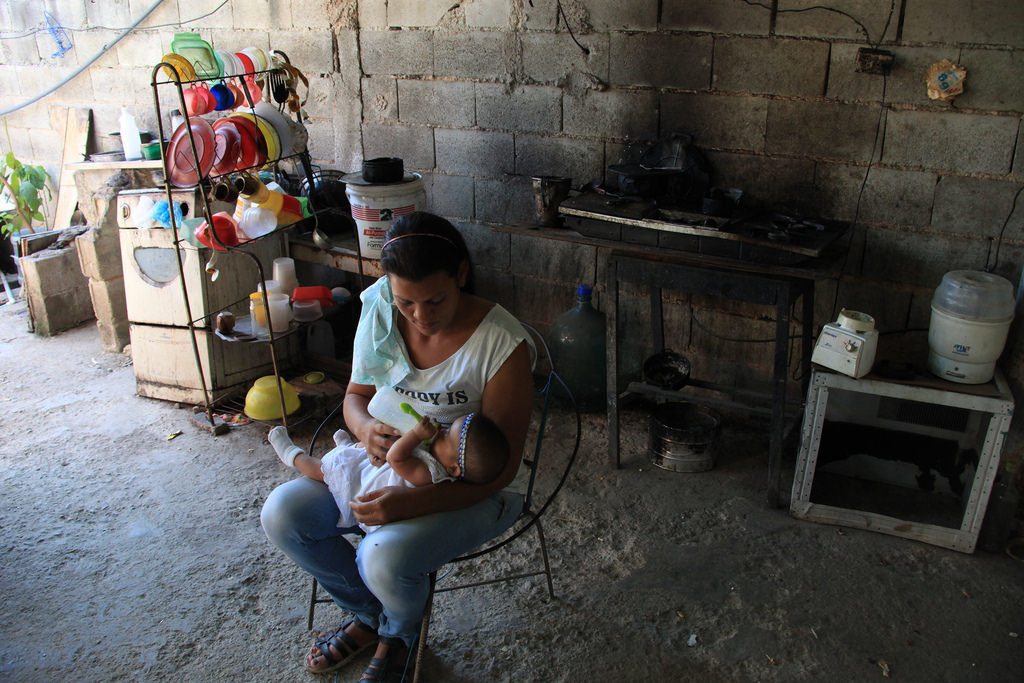 Like many Venezuelans, galloping inflation that’s reached 2,735 percent devastated Surilma’s family. “After giving birth, I breastfed my twins,” she says.  “I was losing so much weight. Getting food is difficult. I’d eat a bit of bread, sometimes pasta, but meat and food like that, it’s difficult. You can work for a week and only earn enough for one kilo of pasta.”

Forced to cut back on food, Surilma’s milk supply dwindled. The twins didn’t put on weight. Money was scraped together to buy cartons of milk at 600 bolivares— twice her weekly earnings. “I was so disoriented that I didn’t know to buy formula,” she says. Even if she had, the cost is a hefty 800 bolivares and almost impossible to find. The dairy milk inflamed her children’s stomach, further exacerbating their poor health.

The local Caritas Coordinator, Mayra Cardosa, heard of the case and came calling. The city of Alianza, where Surilma and her family live, is part of a national network of Caritas Diocese seeking to create a nutritional safety net for expectant and lactating mothers and children under five.

Cardosa leads a weekly weight monitoring sessions where undernourished children receive prescription feedings, and the most severe cases receive emergency medical attention. Surilma’s twins were admitted that very day. Eduardo, the weaker of the twins, wasn’t able to pull through.

“The need is so much more than it was a year ago,” says Cardosa. “Families are surviving on yucca. Their skin is becoming yellow.” Each month the monitoring sessions show an increase in extreme cases. January saw a  total of 17 percent of the children monitoried diagnosed with severe acute malnutrition  a 3 percent jump from the previous month.

Low weight isn’t the only thing that concerns Cardosa. “The children come to us with skin diseases and covered with lice,” she says. “They don’t have the basic items for personal hygiene. Toothpaste costs 200 or 300 bolivares. How are (families) going to purchase that when they don’t even have food?”

Cardosa worries about the susceptibility of the children she sees to other illnesses when they don’t have access to  a basic preventive measure like soap. The failing economy has crippled the health system and caused  diseases once thought eradicated to make a radical comeback. Cases of malaria and typhoid are on the rise with minimal medications in stock to stave off the spread of disease.

Each week Cardosa and her team work to fortify the children of Alianza. “We receive the children with a glass of milk and a bit of food,” she says. “We give what we can.” Twice a month the most severe cases are enrolled in the SAMAN programme for therapeutic feeding. Over the course of 4 weeks, participants receive Nutrialimentos, packets of a complete enriched food that is high in fat, protein, and essential vitamins and minerals. 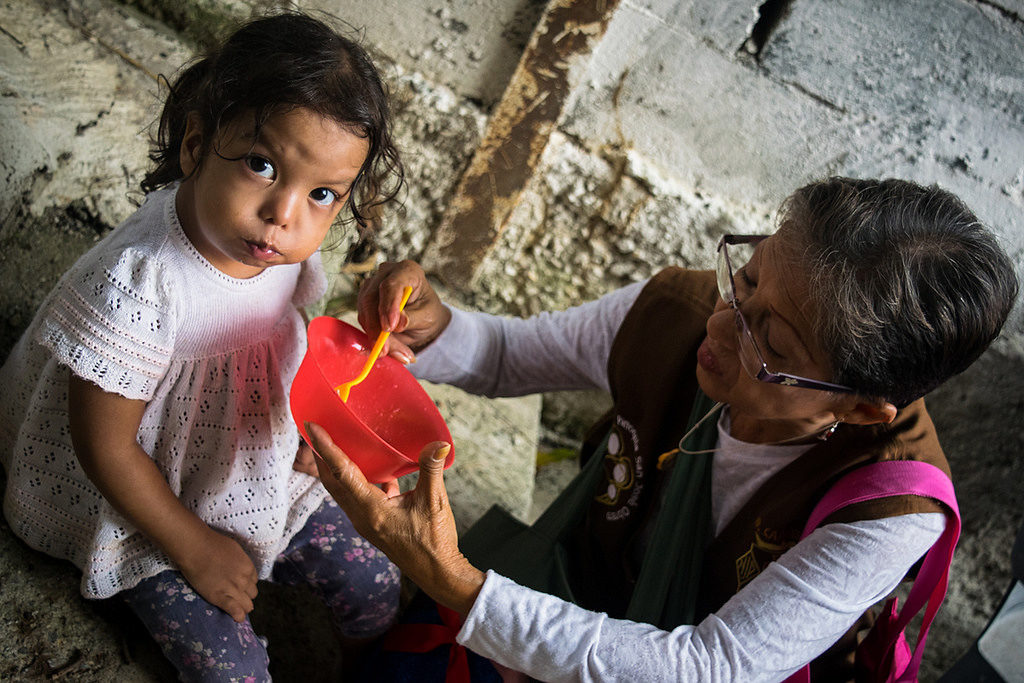 Cardosa says the difference between the children when they start and finish the programme is remarkable. “When they’re first enrolled it’s sad,” she says. “They don’t play well. They don’t smile. They hardly move at all. When they graduate they are playing and laughing.”

Surilma’s dreams for her daughter

A total of 44 parishes in 15 diocese across Venezuela are actively participating with more poised to come online soon.

“With the loss of my son I was devastated,” Surilma says. “But, they (Caritas Venezuela) said that they would not leave me. That gave me hope that the same would not happen to my daughter. I thank God every day for putting Caritas in our path.”

Surilma’s daughter’s once hollowed cheeks and bone thin  arms are now filling out, thanks to regular deliveries of infant formula and baskets of food from her parish Mother Mary Church and Caritas Venezuela. “I look at her, and I feel my heart fill with joy. The situation in Venezuela is difficult. Our hands are tied. With the little, we earn we can’t eat. There is nothing.”

As her little girl sucks away the last of her bottle, Surilma dreams of her future. “I had to push away my sadness over my son to focus on her,” she says. “She’s so fat now. I want her to go to school. To study and become someone special. I ask people to keep supporting this programme. They’ve helped me so much. We don’t eat well in Venezuela. Thanks to this programme, something good is being done, in this country and the world.”