“As the convoy of corpses moved along the streets of Freetown, the entire city was in tears.”

In the aftermath of severe flash flooding and mudslides that struck the capital of Sierra Leone on 14 August, the director of Caritas Sierra Leone, Edward John Bull, has sent out a plea for prayers and for material assistance. Nearly 500 people died in the twin disaster, including more than a hundred children, and another 600 are missing presumed dead. It is estimated that 20,000 people have been displaced, a quarter of whom are children. 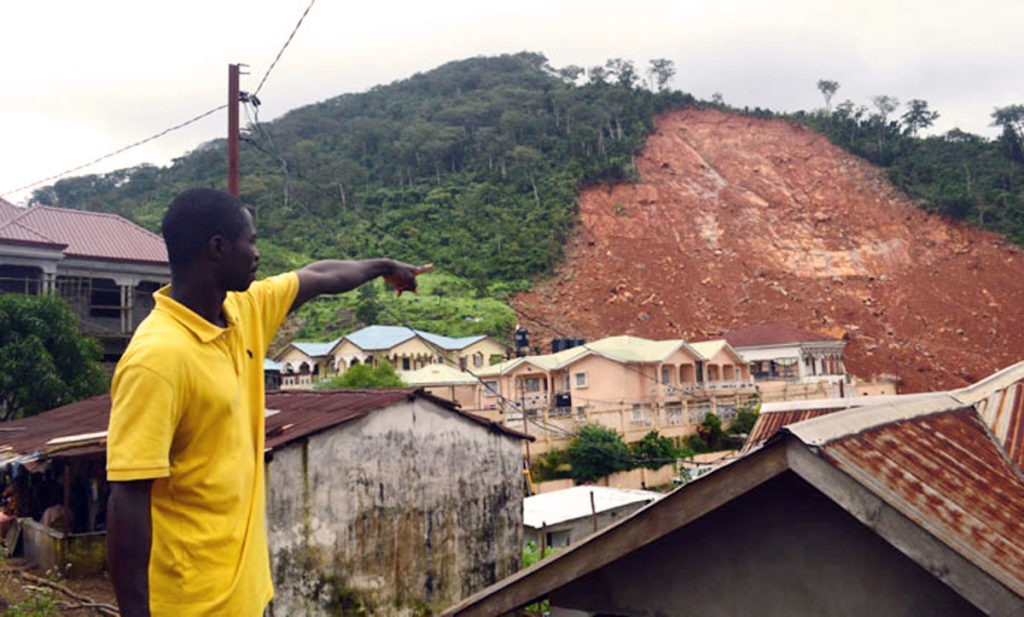 Thousands of households are affected by mudslide in the capital city of Sierra Leone.

“Today we stand awestruck at the human toll and the humanitarian impact that the recent floods and the mudslide have caused,” said the Caritas director in a message addressed to the entire Caritas confederation, as he witnessed the national funeral for 300 of the victims.

“We have thousands of affected households in need of food, clothing, medicines, beds, tents, household items, water and sanitation, shelter, and psychosocial support.”

The national Caritas and Caritas Freetown were amongst the first responders after torrential rain brought floodwaters tearing down from Mount Sugar Loaf at tremendous speed around 2am on 14 August. The flooding caused a hillside to collapse in the Regent area, 15km outside central Freetown, sending a huge wall of mud and rock down into low-lying areas, destroying houses and engulfing families as they slept in their beds.

“Things are really bad on the ground,” said CAFOD’s Country Representative Kayode Akintola whose office is just a few minutes from the affected zone. “There are dead bodies in the water and littering some of the streets.”

Caritas members moved immediately into action with mobile healthcare services, clothing, registration of survivors, and food. Caritas Freetown keeps rice stocks in warehouses which were made available straightaway to feed survivors and 500 volunteers working to help their devastated communities.

With thousands of people made homeless by the floods and evacuation, a daily hot meal is a lifeline. At relief centres set up in the affected areas of Culvert-Bomeh and Regent, Caritas staff and volunteers are cooking up nutritious food for 3000 survivors. Particular attention is given to children and to lactating mothers with infants.

Medical attention is also vital, to help the injured and to stop the spread of disaster diseases such as cholera, diarrhoea and typhoid. CORDAID and CAFOD are focusing on prevention, with information campaigns to alert the community to the dangers of possible outbreaks. Meanwhile Caritas Freetown is running a mobile clinic in the field, touring the five main villages affected. The clinic has so far attended to 1,382 patients and given out medicines free of charge to those who cannot afford to pay.

CRS together with CAFOD initially supported the volunteers who were helping to bury the dead, and for survivors provided water, food and bedding. Now CRS and the Inter-Religious Council of Sierra Leone are working to temporarily resettle homeless people with foster families from the local community.

Trócaire is focusing on gender protection and is distributing ‘dignity kits’ which include basic hygiene products such as soap, towels, toothbrushes, sanitary towels, and underwear, as well as household items. One of Trócaire own Freetown staff, Al Haji Jalloh, is from one of the communities hit by the disaster and lost 15 members of his family. Caritas offers him and his family our thoughts and prayers.

“First we had a terrible civil war,” says Edward John Bull, “then we were battered by cholera, and soon after we had a major Ebola disaster, and whilst recovering from this we have now to face the consequences of a natural disaster of the worst kind. We need your prayers above all else, but our faith is strong in the redemption of Jesus, who suffered and died for us. We are an Easter people. One day Sierra Leone will rise again.”